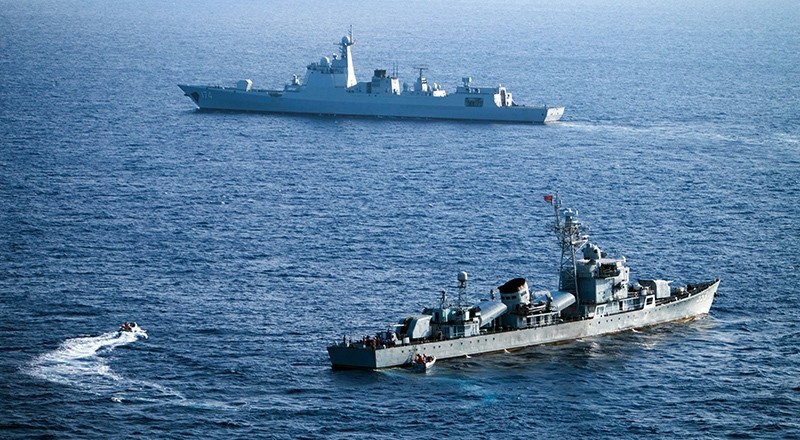 China has slammed an international tribunal ruling by The Hague that Beijing's claim to areas of the South China Sea have no basis.

In a statement released shorty after the ruling early Tuesday, China's Ministry of Foreign Affairs declared the award "null and void," saying it had no binding force.

"China neither accepts nor recognizes it," it underlined.

Beijing claims sovereignty over around 90 percent of the sea, an area marked by a so-called "nine-dash line" on Chinese official maps.

The case was taken to the Permanent Court of Arbitration by the Philippines three years ago, which described China's claim as contrary to international law.

In a 497-page ruling made public early Tuesday, the court said that the claim had no legal basis.

"Although Chinese navigators and fishermen, as well as those of other States, had historically made use of the islands in the South China Sea, there was no evidence that China had historically exercised exclusive control over the waters or their resources," a statement published on its website said.

"The Tribunal concluded that there was no legal basis for China to claim historic rights to resources within the sea areas falling within the 'nine-dash line'."

It found that China had violated the Philippines' sovereign rights by "interfering with Philippine fishing and petroleum exploration, constructing artificial islands and failing to prevent Chinese fishermen from fishing in the zone."

It said fishermen from the Philippines had traditional fishing rights in the Scarborough Shoal, in the east of the sea (which the Philippines refers to as the West Philippines Sea), and China had interfered with these rights by restricting access.

"The Tribunal further held that Chinese law enforcement vessels had unlawfully created a serious risk of collision when they physically obstructed Philippine vessels," it added.

The arbitration was launched three years ago by the Philippines, which described China's claim as contrary to international law.

The South China Sea is one of the world's busiest shipping lanes, believed to be sitting atop huge oil and gas deposits, but Vietnam, Malaysia, Brunei and Taiwan also consider some of the region's waters, islands and reefs to be their territory.

China has spent recent months saying it will not recognize the ruling because it involves issues of sovereignty and maritime delimitation -- issues which Beijing says are not subject to third-party arbitration.

Chinese Foreign Minister Wang Yi used a meeting with UN secretary-general Bank Ki-moon last week to warn that an approach involving unilaterally launched arbitrations "would not help to bring about a peaceful resolution of dispute".

"On the contrary, it would only escalate disputes and tension and should be resisted," he added.