Search for missing Malaysian MH370 to be suspended 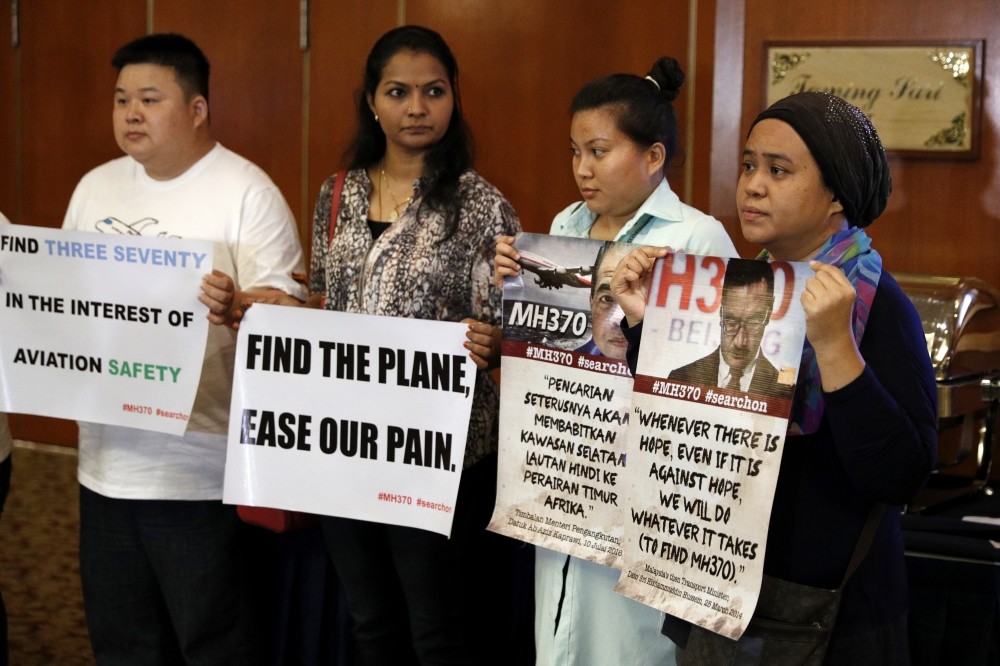 Family members of passengers on board the Malaysia Airlines Flight 370 that went missing on March 8, 2014 hold up a placards during a special press conference in Kuala Lumpur, Malaysia, July 21. (AP Photo)
by reuters
Jul 23, 2016 12:00 am
The hunt for Malaysia Airlines Flight MH370 will be suspended if the aircraft is not found in an area now being searched, Malaysia, China and Australia said in a statement yesterday.

The Boeing 777, with 239 aboard, disappeared in March 2014 while on a flight from the Malaysian capital, Kuala Lumpur, to Beijing. "In the absence of new credible evidence, Malaysia, Australia and China have collectively agreed to suspend the search upon completion of the 120,000 sq-km search," Malaysian transport minister Liow Tiong Lai told a news conference at which he read out the statement from him and his Chinese and Australian counterparts.

The families of those on board, most of whom were from China, have pressed hard for answers ever since the plane went missing, and they are likely to decry any suggestion the search will end.

Liow said the team was not "giving up on the search for MH370" even if the less than 10,000 square kilometres that remains to be searched did not come up with anything.

"Should credible new information emerge which can be used to identify the specific location of the aircraft, consideration will be given in determining next steps," the ministers said in the statement.

Investigators believe the plane was deliberately flown thousands of miles off course before crashing into the southern Indian Ocean off Australia.

Malaysian investigators said in 2015 there was nothing suspicious in the financial, medical or personal histories of pilots or crew.

Several pieces of aircraft wreckage have washed up on beaches in Africa and been positively identified as coming from MH370 but they shed little light on the mystery.

"While acknowledging the significance of the debris, ministers noted that to date, none of it had provided information that positively identified the precise location of the aircraft," the ministers said.

The search has lasted more than two years but has found no sign of the main wreckage.

Searchers at the Dutch company leading the underwater hunt for MH370 told Reuters they believed the plane may have glided down to the sea rather than dived, meaning they have been scouring the wrong patch of ocean.

That was the first time officials directly involved in the search have lent some support to contested theories that someone was in control during the flight's final moments.

The glide theory is not supported by the investigating agencies, which includes Boeing Co, France's Thales SA British satellite company Inmarsat PLC and officials from the United States, Britain and Australia. Liow told the news conference there was not enough evidence to confirm a controlled ditching, and added that he was confident the search was in the right place.

He said all data and information collected from the flight, search and debris of MH370 would be released to the public. "It is in a very big volume, so it will take some time," he said.