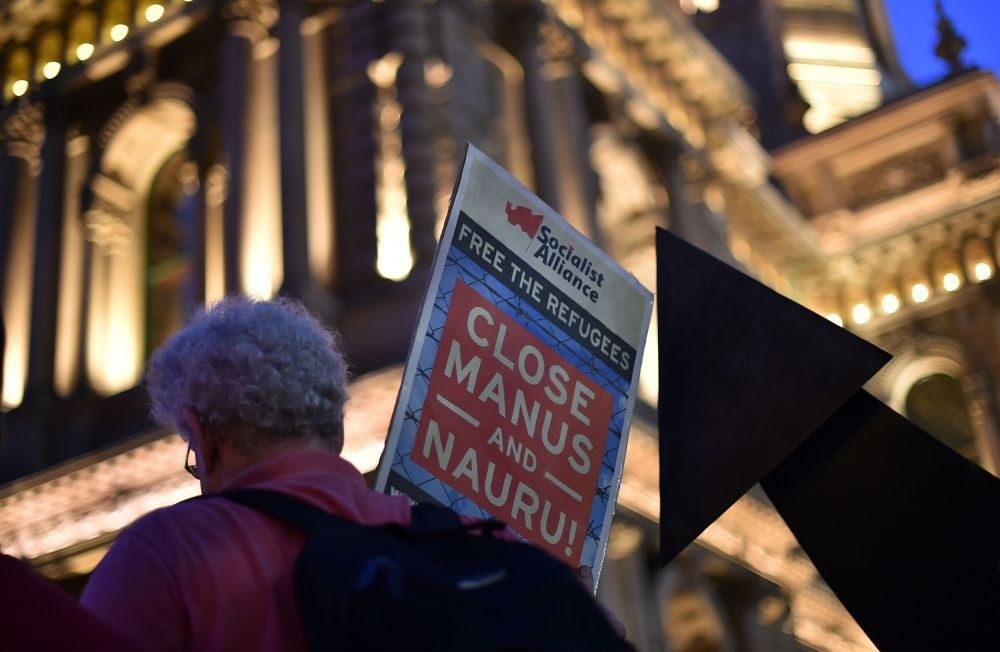 A man with a placard in protest of Australia's immigration policy during a candlelight vigil in Sydney on April 30 for an Iranian refugee who died three days after he set fire to himself on the remote Pacific island of Nauru.
by Daily Sabah with Wires Aug 04, 2016 12:00 am

Hundreds of asylum seekers forcibly sent to the Pacific island state of Nauru by Australian authorities are suffering severe abuse and neglect, according to an undercover investigation released by two human rights groups

Human rights groups accused Australia yesterday of deliberately ignoring the alleged abuse of asylum seekers being held at a remote Pacific island detention facility in a bid to deter future refugees from trying to reach the country by boat.

"Australia's policy of exiling asylum seekers who arrive by boat is cruel in the extreme," Anna Neistat, senior director for research at Amnesty International, said in a statement. "Few other countries go to such lengths to deliberately inflict suffering on people seeking safety and freedom."

Investigators spoke to more than 80 of the 1,200 people being detained by Australian authorities on Nauru, according to the Amnesty-HRW report.

Under its tough immigration policy, Australia detains asylum seekers who arrive by boat at offshore detention centers including Nauru, where conditions have been described as appalling by rights advocates. Australia's Department of Immigration and Border Protection criticized the rights groups for not consulting with the government while preparing the report.

Australia refuses to accept any asylum seekers who attempt to reach its shores by boat. Instead, it pays Nauru and the Pacific island nation of Papua New Guinea to hold them — often for years.

Reports of abuse, miserably hot and crowded living conditions, and frequent suicide attempts at the detention camps have plagued Australia for years; in April, an Iranian refugee on Nauru died after setting himself on fire. A 21-year-old Somali woman has become the second refugee to set herself on fire at an offshore Australian detention center. Human rights groups have long called on Australia to abandon its offshore detention policy, calling the practice a violation of the country's international human rights obligations.

Australia argues that the policy has saved lives by removing the incentive for migrants to attempt the dangerous and often deadly ocean crossing from Indonesia to Australia in rickety boats. Critics say the country has simply traded one evil for another.

Journalists have been almost entirely banned from Nauru in recent years. But researchers from Amnesty International and Human Rights Watch said they were able to enter the country last month, spending 12 days interviewing 84 refugees and asylum seekers. Those interviewed said they were suffering from severe anxiety, depression and short-term memory loss. Both adults and children told interviewers they wanted to kill themselves.

Since last year, asylum seekers held in the detention center have been allowed to leave the camp and move about the island during the day — but many say they are too afraid to do so.

Every refugee and asylum seeker interviewed by the researchers said that they or their family members had been intimidated, harassed or physically assaulted by locals, including being pelted with bottles and stones and robbed at knifepoint. Several women reported being sexually assaulted.

In February, Australian officials announced that a baby, seeking asylum after having been brought to the capital city of Canberra from a Pacific detention camp for hospitalization and medical treatment, will be returned to the camp as a message to smugglers, despite protests from doctors and others. The infant, known only by the pseudonym Asha – Nepalese for "hope" – has put a name to the faces of hundreds of anonymous asylum seekers being faced with deportation from Australia to a detention camp Nauru.
RELATED TOPICS