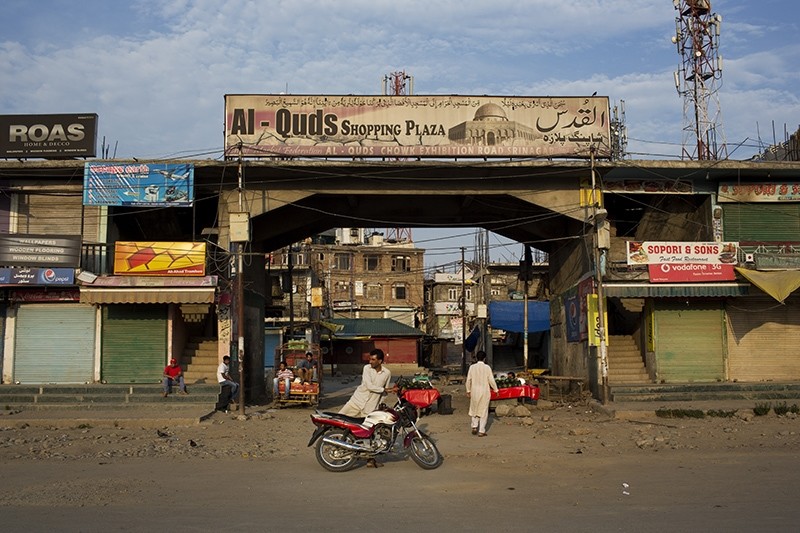 In this July 25, 2016, photo, Kashmiri fruit vendors wait for customers at a closed market during a strike in Srinagar, India-controlled Kashmir. (AP Photo)
by Compiled from Wire Services Aug 05, 2016 12:00 am

Gunmen in military uniforms sprayed bullets and flung grenades into a crowded market in northeast India on Friday, killing at least 13 people in a rampage authorities blamed on a regional separatist group.

A further 15 people were wounded in the attack on the outskirts of Kokrajhar town, one of the deadliest in recent years in the state of Assam, a region with a history of sectarian and separatist bloodshed.

The assailants, one of whom was shot dead by security forces, arrived by auto-rickshaw, witnesses said. Troops were in pursuit of three or four others hiding in a nearby forest, Assam police chief Mukesh Sahay told reporters.

He attributed the attack - for which no one had claimed responsibility - to the outlawed National Democratic Front of Bodoland (Songbijit) group, a militant faction fighting for a separate homeland for the indigenous Bodo tribespeople.

Sahay said police had recovered an AK-47 rifle and explosives from the as yet unidentified dead gunman, as well as the assailants' three-wheeler.

A senior home ministry official in New Delhi also said preliminary reports indicated the attack was carried out by the group. "Police have launched a hunt to trace insurgents... It is a militant attack and we will be sending a team from Delhi to investigate further," the official said.

Like much of India's remote and underdeveloped northeast, Assam has been racked by a hotchpotch of ethnic and tribal insurgencies for decades.

Prime Minister Narendra Modi's nationalist Bharatiya Janata Party (BJP) won power in Assam for the first time in May after campaigning on a promise to disenfranchise Bangladeshi Muslim immigrants while also pledging to increase spending in the state.

"This attack is intended to destabilise peace in Assam," said Himanta Biswa Sarma, the state's finance and health minister and a member of the BJP.

Violence in Assam and the wider northeast has eased as several militant groups have called ceasefires, although attacks by one community against another are not uncommon.

Friday's attack was the worst in the recent past, but the group was blamed for the shooting deaths of more than 60 Muslim settlers and Adivasi tribespeople in Assam in separate attacks in 2014.

The rebels have been targeting communities they consider outsiders, including Adivasis, whose ancestors migrated to Assam more than 100 years ago to work on tea plantations — as well as Muslims, accusing them and the federal government of exploiting the region's wealth while neglecting the locals.

Dozens of rebel groups have been fighting the government and sometimes each other for years in seven states in northeast India. They demand greater regional autonomy or independent homelands for the indigenous groups they represent.

At least 10,000 people, most of them civilians, have been killed in Assam state alone in the last three decades.