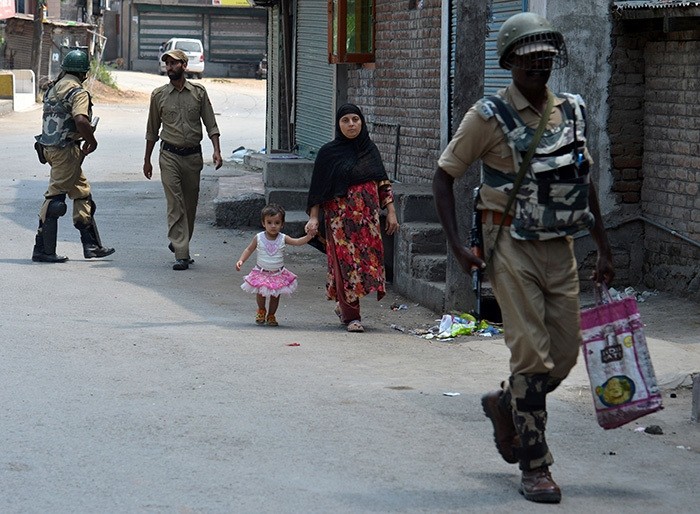 Indian paramilitary troopers patrol as a Kashmiri woman with a child walks during a curfew in Srinagar on August 5, 2016. (AFP Photo)
by Daily Sabah with Agencies Aug 05, 2016 12:00 am

Authorities in Indian-held Kashmir extended a rigid curfew to most parts of the disputed Himalayan region on Friday in an attempt to prevent an anti-India protest in the main city.

The mostly Muslim region, where resistance to rule by predominantly Hindu India is strong, has been under a rolling curfew and strikes for nearly a month after the killing of a popular opposition commander sparked massive anti-India demonstrations. At least 52 civilians and a policeman have been killed and thousands injured.

A call have been made to Kashmiris to march to prominent Hazratbal shrine in the city of Srinagar and stage protests after Friday prayers there.

Police and paramilitary soldiers patrolled deserted streets and laid razor wire and steel barricades to cut off neighborhoods in the city. Shops, businesses and schools remained closed for the 28th consecutive day.

The troubled region is experiencing some of the largest protests against Indian rule in recent years since troops killed the an opposition commander on July 8.

Tens of thousands of people have defied the curfew and participated in street protests, often leading to clashes between rock-throwing residents and government forces firing live ammunition, shotgun pellets and tear gas.

Kashmir, a Muslim-majority Himalayan region, is split between areas controlled by India and Pakistan, who both claim the entire region as their territory.

Since 1989, Kashmiri resistance groups in Jammu Kashmir have been fighting for independence or unification with Pakistan.

More than 70,000 people have been reportedly killed in the conflict, most in counter-insurgency operations by Indian security forces. India maintains more than 500,000 troops in the disputed region.