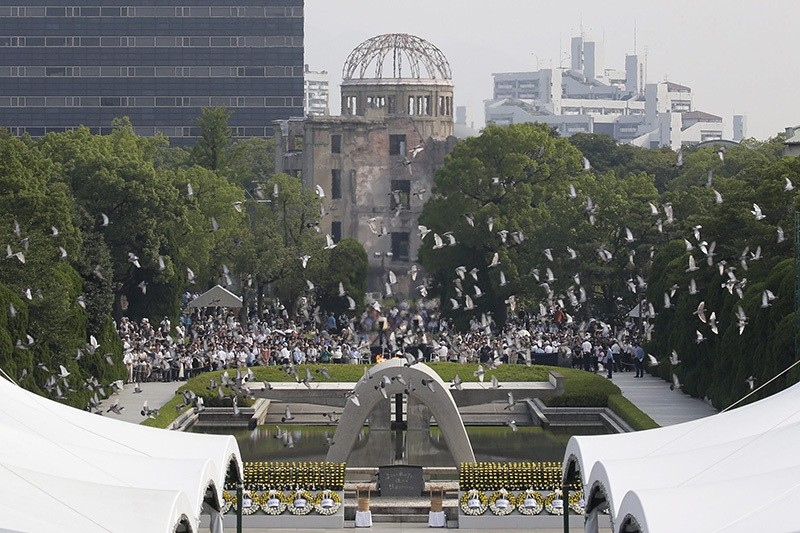 Doves fly up past a cenotaph and the Atomic Bomb Dome during the peace memorial ceremony marking the 71st anniversary of the nuclear bombing of the city at Hiroshima Peace Memorial Park in Hiroshima, western Japan, 06 August 2016. (EPA Photo)
by Aug 06, 2016 12:00 am

Japan on Saturday marked 71 years since the city of Hiroshima was destroyed by a US atomic bomb, as its mayor urged the world to unite in abolishing nuclear weapons.

The annual ceremony came just months after Barack Obama became the first sitting US president to visit the western Japanese city, paying moving tribute to victims of the devastating bomb.

About 50,000 participants, including Prime Minister Shinzo Abe and representatives of more than 90 countries and regions, observed a minute's silence at the exact time the atrocity occurred some seven decades ago.

During the solemn ceremony, Hiroshima mayor Kazumi Matsui recalled the visit by Obama in his peace declaration, citing the president's historic speech.

"(His visit) was the proof that Hiroshima's strong wish not to tolerate the 'absolute evil' was shared by President Obama," he said.

The mayor urged the world to take action towards the abolition of "the ultimate form of inhumanity, united and with passion".

Obama in May embraced survivors as he made his visit to the city and the Hiroshima Peace Memorial Park.

"71 years ago, death fell from the sky and the world was changed," he said of the bomb, adding it "demonstrated that mankind possessed the means to destroy itself".

Obama offered no apology for the bombings, having insisted he would not revisit decisions made by then president Harry Truman.

But his moving tribute and brief conversations with elderly survivors, which included an unexpected embrace with one of them, profoundly impressed most Japanese.

Abe, after lying a wreath of flowers, reiterated Saturday that Tokyo will continue working to rid the world of nuclear weapons.

"I am convinced (Obama's visit) brought a great hope for people in Japan, in the world and in Hiroshima and Nagasaki, who believe in a world without nuclear arms," he said.

The bombing claimed the lives of 140,000 people. Some died immediately while others succumbed to injuries or radiation-related illnesses weeks, months and years later.

Many in Japan feel the attacks amount to war crimes and atrocities because they targeted civilians and due to the unprecedented destructive nature of the weapons.

But many Americans believe they hastened the end of a bloody conflict, and ultimately saved lives, thus justifying the bombings.

Since Obama went to Hiroshima, the park and accompanying memorial museum have witnessed an increase in visitors.

But an association of atomic bomb survivors has criticized his speech, saying he failed to explicitly mention US responsibility for the bombing.

Abe last year faced harsh criticism, especially from A-bomb survivors, for his policy of expanding the role of Japan's military and opening the door to possibly sending troops into combat for the first time since the war.