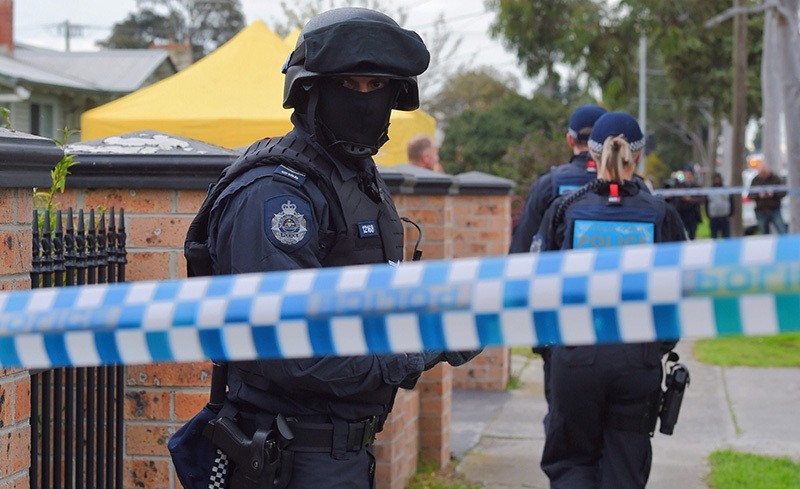 A picture made available on 07 August 2016 shows Australian Federal Police (AFP) officers conducting a terror raid at a house on Ballarat Rd in Braybrook, a suburb west of Melbourne (EPA Photo)
by Compiled from Wire Services Aug 07, 2016 12:00 am
A 31-year-old man appeared in an Australian court on Sunday charged with planning a terror attack, following a series of counter-terrorism police raids.

Phillip Galea was charged with acts done in preparation for a terrorist act and collecting or making documents likely to facilitate a terrorist act, after being arrested in police raids in Melbourne on Saturday. Police did not give details of the target but said it was in the southern state of Victoria.

"I will be fighting these charges and I believe they are a conspiracy against the patriot movement," Galea told a Melbourne Magistrates' Court hearing during in a brief appearance on Sunday according to the Australian Associated Press.

Australian media outlets reported Galea had links to far-right organisations Reclaim Australia and True Blue Crew. Reclaim Australia posted on Facebook that it had no links to the arrested man and that it "always denounced violence".

Far-right political parties opposed to Islam and Asian immigration are on the rise in Australia.

Reclaim Australia and True Blue Crew, which are not political parties, have previously been involved in violent clashes with pro-immigration groups at rallies in Melbourne.

Police would not confirm if he was a member of the anti-Islam Reclaim Australia group but said he had a "number of affiliations to different organizations".

The Joint Counter-Terrorism Team, which took part in the operation on Saturday, has been carrying out a series of raids in various cities amid increasing concern about home-grown extremism.

Canberra raised the terror threat alert level to high in September 2014, while parliament has passed a suite of new national security laws.