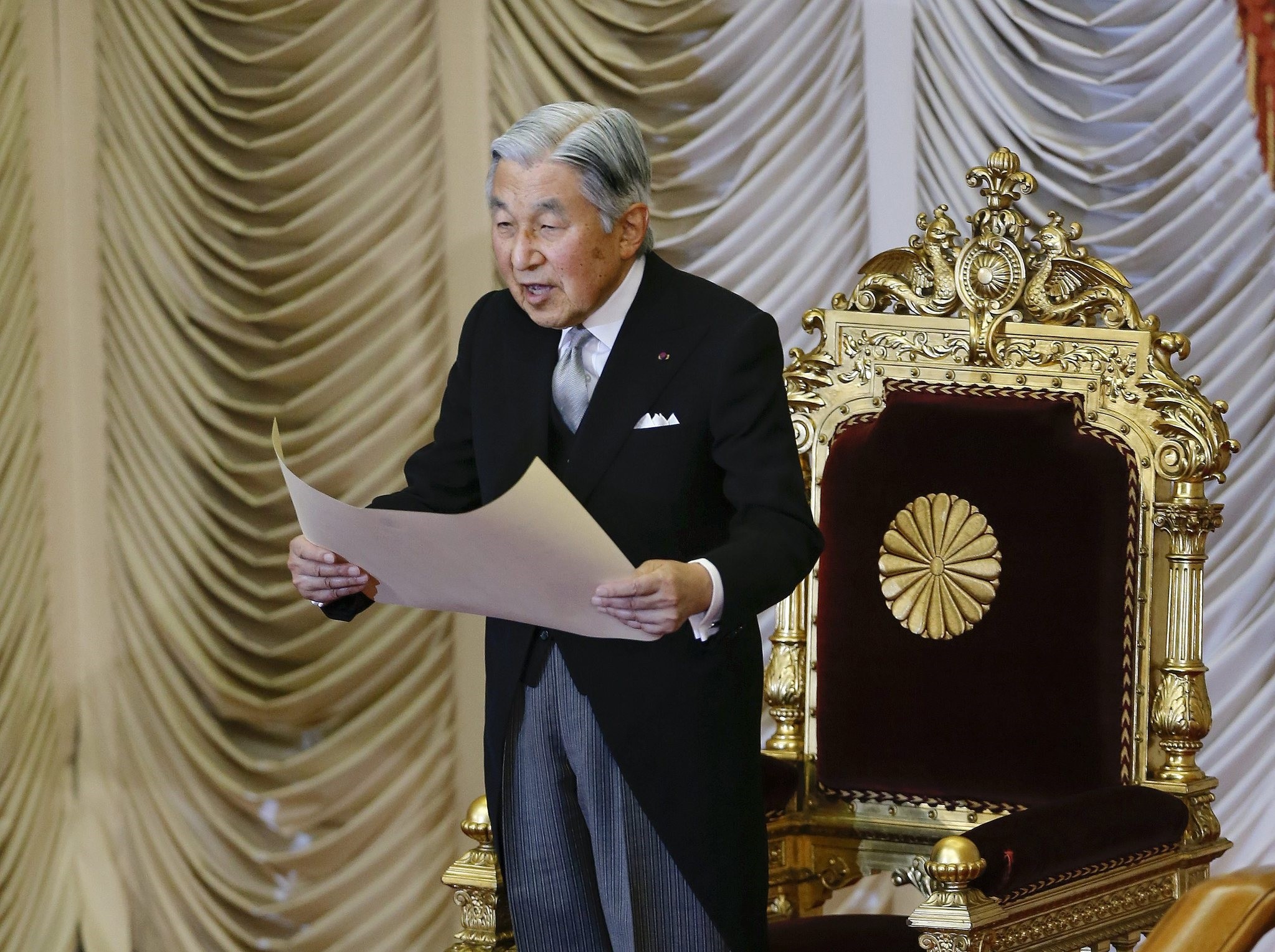 The Japanese emperor, in a rare address to the public, signaled yesterday his apparent wish to abdicate in what would be the first abdication from the Chrysanthemum Throne in two centuries

Emperor Akihito said Monday his advancing age and weakening health mean he may no longer be able to carry out his duties, setting the stage for Japan to prepare for a historic abdication.

"There are times when I feel various constraints such as in my physical fitness," the 82-year-old said in a national address. "As we are in the midst of a rapidly ageing society, I would like to talk to you today about what would be a desirable role of the emperor in a time when the emperor, too, becomes advanced in age," he said.

Speculation about Akihito's future emerged last month with reports he had told confidantes that he would like to step down in a few years, in what would be the first abdication from the Chrysanthemum Throne in two centuries.

"I am worried that it may become difficult for me to carry out my duties as the symbol of the state with my whole being as I have done until now," he said, wearing a dark suit and sitting at a table in the pre-recorded video.

Akihito spoke obliquely - never mentioning the word abdication and stressing he is legally prevented from commenting on the imperial system - but analysts and media said his intention was clear. "His majesty the emperor hints at abdication," read a two-page extra edition by the top-selling Yomiuri Shimbun daily.

The comments will now allow the government to begin creating the legal mechanism for a royal departure, which currently does not exist.

Prime Minister Shinzo Abe, in a swift response, said the government would take his remarks "seriously." "Considering the emperor's duties, as well as his age and the burden (of the job), we have to firmly look at what we can do," he said.

Tomitaro Hashimoto, an assistant professor at Reitaku University, said while the emperor did not use the word abdication, "his message clearly called on the public to concretely consider the way for that in the future." "Legally, he can't request a revision of law," said Hashimoto, an expert on the imperial system. "That's why he can't ask directly."

Any eventual move by Akihito to step down, which would see him replaced by his eldest son Crown Prince Naruhito, appears to have wide support. A survey by the Asahi Shimbun daily published Monday showed that 84 percent of people surveyed backed the idea.

Akihito has had surgery for prostate cancer and heart problems, both of which he alluded to in his address, though he stressed that he currently enjoys good health. Public reaction to the speech was sympathetic. "Since his majesty is getting so old, I was worried about his health, but he made his intention clear and the abdication issue came up," said 20-year-old Ryota Utsumi. "It gives me a sense of relief," added Utsumi, who watched the address on a big screen in a busy Tokyo shopping area.

It was only the second time Akihito had spoken directly to the nation. The first was in the days after the March 2011 triple earthquake, tsunami and nuclear disaster as he sought to calm a nation undergoing its worst crisis since the war.

Japan's imperial house is said to be the world's oldest hereditary monarchy, and according to legend stretches back some 2,600 years in an unbroken line. It is deeply ingrained in the nation's native Shinto religion.

The speech came in a historically sensitive month. The country commemorated the US atomic bombing of Hiroshima on Saturday and does so again on Tuesday for Nagasaki.

And next Monday Japan pauses to recall the anniversary of its defeat in World War II under Akihito's father Hirohito, an annual event at which the emperor delivers a speech. At last year's event Akihito expressed "deep remorse" over World War II. He has keenly embraced the role of symbol of the state imposed after the conflict ended. Previous emperors including his father had been treated as semi-divine. Akihito is credited with seeking reconciliation both at home and abroad over the legacy of the war fought in his father's name. He has ventured to a number of locales that saw intense fighting, including Okinawa at home and Saipan, Palau and the Philippines abroad, offering prayers for the souls of all the dead and not just Japanese. His life has also been characterized by a more personal openness previously unknown among Japanese royals. His wife Empress Michiko was a commoner when they met and they chose to raise their children themselves, forgoing the traditional use of nannies.