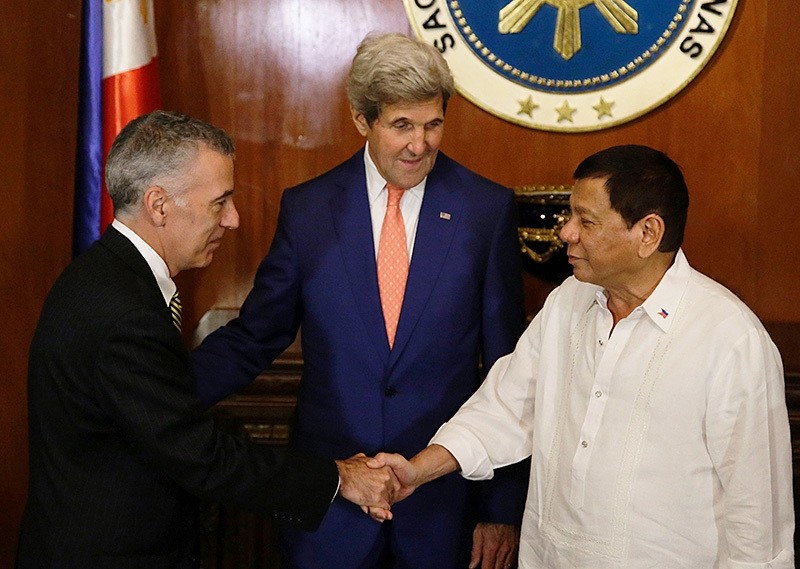 The Philippines' firebrand President Rodrigo Duterte has sparked a fresh diplomatic row with his colourful language, calling the US ambassador "gay" in comments that prompted Washington to summon Manila's envoy to complain.

In the latest of series of tirades, Duterte used a local Tagalog language homophobic slur to express his displeasure with US Ambassador Philip Goldberg in televised comments made Friday.

"As you know, I'm fighting with (US Secretary of State John Kerry's) ambassador. His gay ambassador, the son of a whore. He pissed me off," Duterte said.

Duterte, 71, surged to power with a landslide in May following an incendiary campaign in which he gleefully used foul language to disrespect authority figures, from his local political rivals to the pope.

He first came into conflict with US envoy Goldberg on the campaign trail, after he said he wanted to rape a "beautiful" Australian missionary who was sexually assaulted and murdered in a 1989 prison riot in Davao, the city he ran for two decades.

Goldberg and the Australian Ambassador both strongly criticised these comments.

"He meddled during the elections, giving statements here and there. He was not supposed to do that," Duterte said Friday.

The US State Department said that the Filipino charge d'affaires, Patrick Chuasoto, had been summoned Monday to discuss Duterte's comments.

"We had that conversation," department spokeswoman Elizabeth Trudeau said.

"I think what we were seeking is perhaps a better understanding of why that statement was made," she added.

Philippine foreign affairs spokesman Charles Jose confirmed the meeting but said Manila's envoy had been "invited to the State Department to discuss the entire breadth of Philippines-US relations."

A former US colony, the Philippines and the United States have long shared a military treaty.