Uzbek President Karimov has died, who will be next? 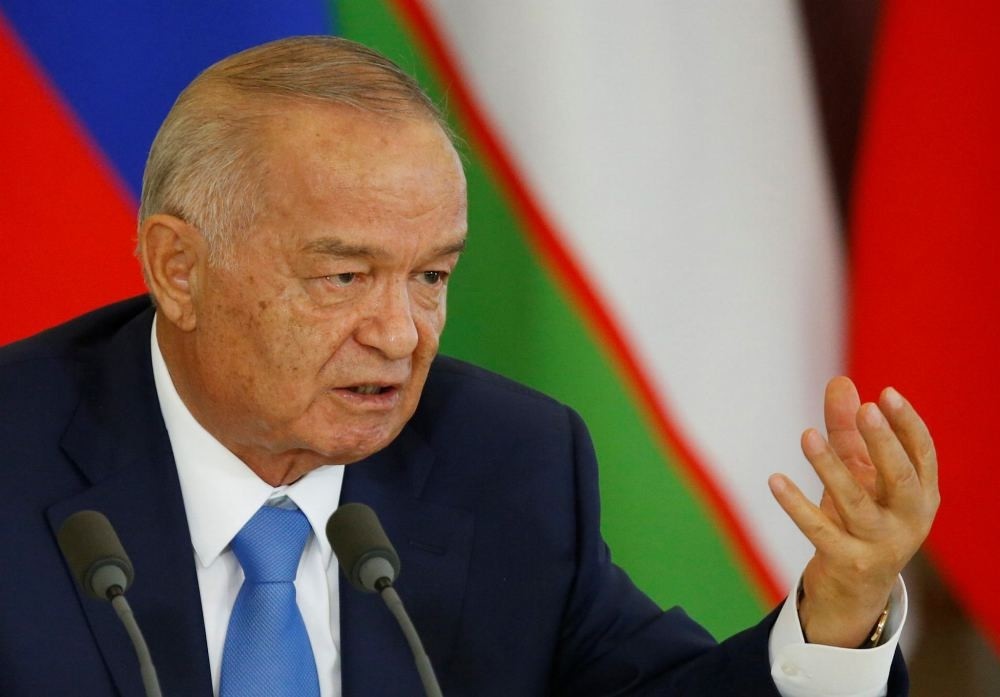 Uzbek President Islam Karimov is on stable condition but remains in intensive care after suffering a brain hemmorhage on Aug. 27.
by Cihangir Yıldırım Sep 01, 2016 12:00 am

With the death of Uzbek President Islam Karimov due to a brain hemorrhage, the names of current Prime Minister Mirziyoyev and Deputy Azimov have come to the fore amid a rise in questions on succession in one of the world's most autocratic and closed countries

Uzbek President Islam Karimov, who suffered a brain a stroke recently, died in hospital, Reuters reported on Friday citing three diplomatic sources. The Uzbek government said that ailing President Islam Karimov is in critical condition, following a week of speculation that the country's president of nearly 27 years could be at death's door on Friday.

After his death, some of the names being placed on the country's agenda include Prime Minister Shavkat Mirziyoyev, Deputy Prime Minister Rustam Azimov and National Security Service Chief Rustam Inoyatov.

Prime Minister Mirziyoyev, 58, who has overseen the government since 2003, is a more likely consensus candidate than the others. Previously, the prime minister served as governor of the Jizzak region from 1996 to 2001 before serving as governor of Samarkand from 2001 to 2003. His candidacy for premiership by Karimov was approved by the Uzbek Parliament in 2003. The only official statement regarding Karimov's hospitalization came from the Cabinet of Ministers, which Mirziyoyev heads. If the prime minister were to become president, his government could be more repressive and subject to widespread criticism, according to Uzbek observers.

Another favorite candidate who could take Karimov's place is the country's first Deputy Prime Minister and Finance Minister Rustam Azimov, 56. Azimov is a native of the Uzbek capital of Tashkent and has served in the national government since 1998. Azimov was the head of Uzbekistan's National Bank for Foreign Activities in 1992, a year after the country's declaration of independence. Some exiled Uzbek opposition figures claimed that Azimov works closely with Karimov's daughter, Gulnara Karimova, and allegedly Azimov helps Karimova funnel money into foreign banks and conduct international deals. Some exiled opposition figures claimed that Azimov has been put under house arrest but Uzbek officials have denied this. Uzbek observers see Azimov as more sophisticated than Uzbek Prime Minister Mirziyoyev and emphasized his experience in dealing with Western countries.

Another name on the agenda is Rustom Inoyatov, 72, who has served as the head of the National Security Service of Uzbekistan (SNB) since 1995. Also hailing from Tashkent, he has been the target of claims raised by Radio Free Europe that allege the Tashkent Bombing, an apparent attempt to assassinate President Karimov, was carried out by the SNB under Inoyatov's orders in 1999. Although the Uzbek government blamed figures from the Islamic opposition, including the Islamic Movement of Uzbekistan (IMU), the attacks were not clarified due to tight media control across the country. President Karimov and the SNB declared that Islamic figures were responsible for the attack just two hours after the bombings. The attacks were followed by numerous arrests and crackdowns on religious communities in Uzbekistan. Uzbek observers see Inoyatov as a kingmaker – not a king – and give him a lower chance for candidacy in comparison to other figures. Without Inoyatov's support it would be nearly impossible for anyone to become the next president of Uzbekistan.

The president's elder daughter, Gulnara Karimova (known simply by her first name), is a flamboyant figure formerly seen as a potential successor, who has suffered a spectacular fall from grace since she openly criticized officials and her own family members. Gulnara is also under investigation in Uzbekistan on charges of many cases of corruption, including claims that she allegedly took more than $1 billion in bribes from Scandinavian and Russian telecom companies wanting a piece of the Uzbek market. She has also held positions in several diplomatic posts and built a sprawling business empire with interests in almost every branch of the economy in resource-rich Uzbekistan. Gulnara served as counselor at Uzbekistan's Mission to the U.N., and she became the permanent representative of Uzbekistan to the U.N. in Geneva. She is currently under house arrest.

Islam Karimov, a former communist official who is known for his repressive and dictatorial policies, tolerates no political opposition and cracks down on civil and human rights groups as well as independent media outlets. His government has frequently been accused of human rights abuses and a conviction has triggered a string of arrests, interrogations and further convictions of family members, neighbors, friends and business partners of Karimov. Suspected Muslims are routinely extradited or kidnapped by Uzbek security agents from Russia and other former-Soviet states, even though some have changed their citizenship and asked for asylum. According to Human Rights' Watch (HRW), Uzbek prison authorities routinely beat prisoners and use extreme forms of torture, including electric shock, asphyxiation and sexual humiliation, to extract information and confessions from inmates.

Muslim prisoners have even been tortured for praying and at least 23 people were tortured to death in prison in 2014, according to an HRW report in 2014. Another forensic report released by the British Embassy alleges that two prisoners were boiled to death. The U.N. Committee Against Torture has said that torture is carried out "systematically" by law enforcement officers in Uzbekistan's police stations, prisons and detention facilities run by the National Security Services (SNB). According to the Initiative Group of Independent Human Rights Defenders (IGHRD), at least 12,800 people have been imprisoned since 2002 in Uzbekistan on trumped-up charges, with many facing torture. The regime's crackdown on Muslims, considered radical by opposition figures and businessmen, makes Uzbekistan one of the world's most repressive countries. Uzbekistan was included in Freedom House's "The Worst of the Worst: The World's Most Repressive Societies" in 2015. The International Helsinki Federation for Human Rights (IHF) and HRW asked the U.N. Human Rights Council in Geneva to continue monitoring human rights in Uzbekistan, but the U.N. council is considering ending their observation.