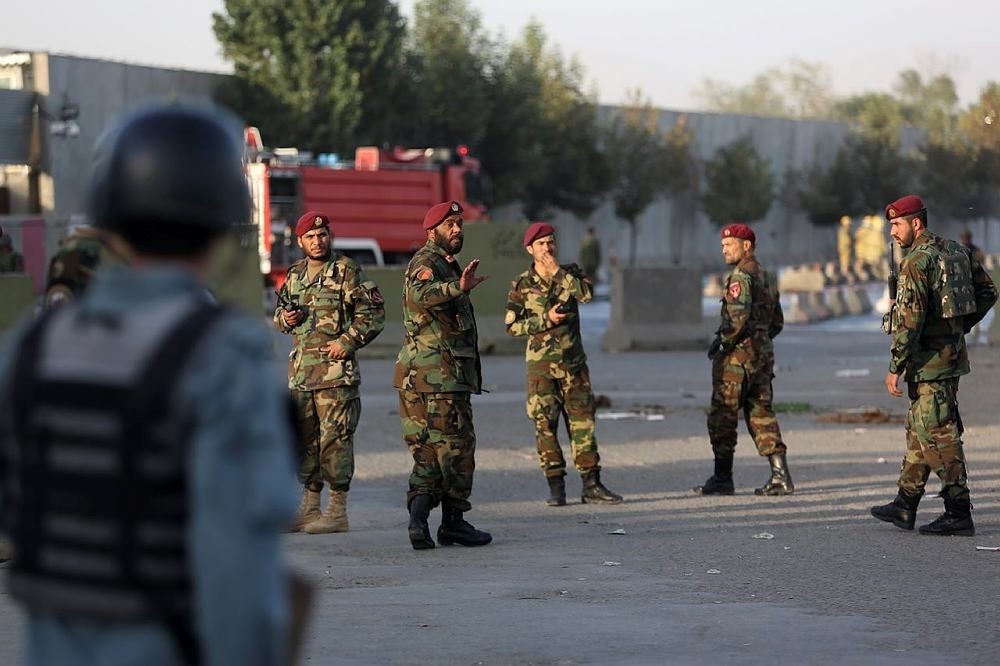 At least 35 people including six Afghan security forces were killed in twin bombings near the Presidential Administrative Office and Defense Ministry in Kabul on Monday, ministry spokesman Mohammad Radmanesh said, adding 103 people were also wounded in the attack.

Security forces rushed to the scene after an initial explosion at the end of office hours. This was followed by another blast when a suicide bomber blew himself up among the crowd that had gathered to assist the injured.

Among those killed was General Abdul Raziq, a senior Afghan army official and the chief of police for district two of Kabul city. "Gen. Raziq succumbed to his wounds in a hospital," Radmanesh said. "He was assisting with the wounded from the initial blast when the second suicide bombing occurred," he added.

The incident occurred in one of the most crowded areas of the capital where the Presidential Administrative Office, Ministry of Defense and district police headquarters are located, all within close proximity of each other.

The Taliban claimed responsibility for the attack, adding that it had killed tens of soldiers and officers in its recent effort to take chunks out of the security elite in Kabul.

Later in the evening, three attackers barricaded themselves inside an office of the aid group Care International in central Kabul. Afghan security forces ended the 11-hour standoff on Tuesday, killing the last gunman holding out.

After hours of standoff, interrupted occasionally by sporadic gunfire, Interior Ministry spokesman Sediq Sediqqi said Afghan special forces had killed all those involved in the attack in the Share Naw area of Kabul. There was no immediate claim of responsibility for the attack.

Initial casualty reports suggested one person had been killed and six injured while more than 31 people were evacuated.

The attacks highlighted the precarious security in the capital just a month before a conference in Brussels where international donors are expected to pledge continued financial support to Afghanistan.

"We strongly condemn the attacks in Afghanistan and extend our condolences to the Afghan government and the families of those killed, and wish a speedy recovery to the injured," the ministry said in a statement.

The statement added the determination of the Afghan government and Afghan people, which have stepped up their efforts against terrorism with the support of the international community, cannot be crippled by these terrorist attacks.

"Turkey will continue remaining in solidarity with fellow Afghanistan."

Sixteen people were killed late last month and 39 others wounded in another Taliban attack on the American University of Afghanistan.

In April, 64 people were killed and more than 300 others were wounded after the Taliban attacked an organization providing security for the Afghan elite.