Philippines leader calls US President Obama 'son of a whore' 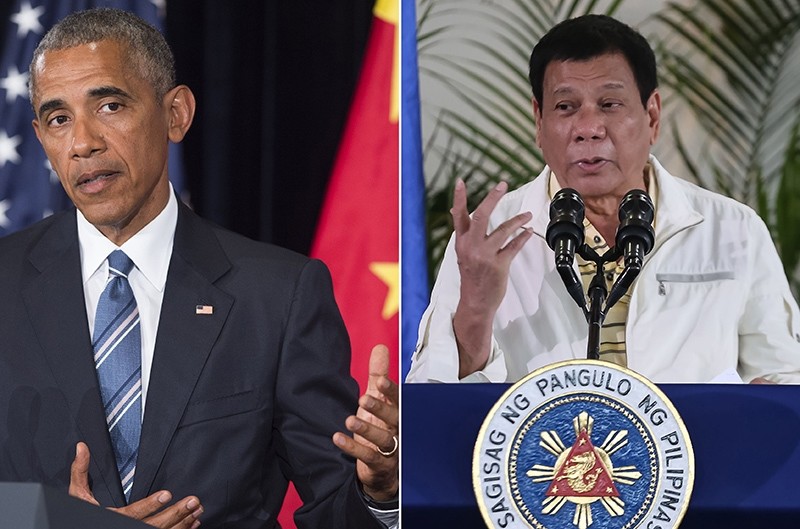 Philippine President Rodrigo Duterte called Barack Obama a "son of a whore" on Monday as he vowed not to be lectured by the US leader on human rights when they meet in Laos.

The acid-tongued Duterte bristled at warnings he would face questioning by the US president over a war against drugs in the Philippines that has claimed more than 2,400 lives in just over two months.

"You must be respectful. Do not just throw away questions and statements. Son of a whore, I will curse you in that forum," Duterte told a news conference shortly before flying to Laos to attend a summit.

"We will be wallowing in the mud like pigs if you do that to me."

Duterte was due to hold a bilateral meeting with Obama on Tuesday afternoon on the sidelines of a gathering of global leaders hosted by the Association of Southeast Asian Nations (ASEAN) in Vientiane, the Lao capital.

But shortly after Duterte spoke, Obama appeared to cast doubt on whether such a meeting could take place.

Calling Duterte "a colourful guy", the US president said was asking his staff to find out whether a meeting would be useful.

"I always want to make sure if I'm having a meeting that it's actually productive and we're getting something done," he told reporters.

Duterte, 71, was elected in May after a promise to wage an unprecedented war on illegal drugs that would see tens of thousands of suspects killed.

Official figures released Sunday show that, since he took office on June 30, over 2,400 people have been killed in police anti-drug operations and by suspected vigilantes.

Speaking on the sidelines of the G20 summit in the Chinese city of Hangzhou, Obama said Washington recognised that drugs were a significant problem for the Philippines. But he insisted that he would not shy away from raising concerns about the way the issue was being handled under the new administration.

"The issue of how we approach fighting crime and drug trafficking is a serious one for all of us. We've got to do it the right way," he said.

"Undoubtedly, if and when we have a meeting, this is something that's going to be brought up. And my expectation, my hope is that it could be dealt with constructively."

And he vowed Monday the bloodbath would continue as he pursued his goal of eradicating illegal narcotics in the Philippines.

Duterte insisted he would not take orders from the United States, a former colonial ruler of the Philippines, and did not care about how he was perceived.

"I don't give a shit about anybody observing my behaviour," he said.

Duterte has quickly earned a reputation for making offensive comments about his critics, or others he does not like.

He has also branded Pope Francis and the US ambassador to Manila sons of whores.

And before the United Nations criticised him, he told the global body to "Fuck you".