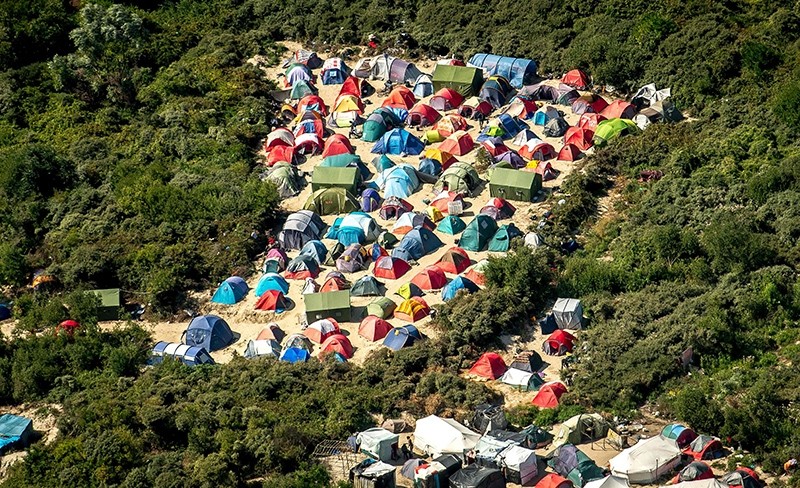 Two convoys of trucks and tractors slowed traffic to a crawl on the main approach road to Calais on Monday in a protest against the impact of growing numbers of migrants disrupting the French port.

Local authorities are urging travelers to avoid the area in hopes of limiting disruption from the Monday morning blockade, aimed at paralyzing traffic on the route used to access the Eurotunnel and port.

Answering an appeal from drivers and farmers unions, the vehicles set off from different assembly points towards Calais at around 8 AM (0600 GMT). Calais residents would also form a human chain along the port road, said protest organisers.

The interior minister promised Friday to close the Calais camp, but protesters want him to set a date.

The camp, currently home to at least 7,000 migrants from the Mideast and Africa trying to reach Britain, has epitomized the challenges of Europe's migrant crisis. Authorities have tightened security and closed half of the camp, but the migrant population has reached record highs.

"We have to do this. We have to escalate things, because for months now the situation has been getting worse and worse," said David Sagnard, president of FNTR national truck drivers' federation, as the convoys, each with about 40 vehicles, set off.

"Before, it was just attempts to get on trucks. Now there is looting and wilful destruction, tarpaulins are slashed, goods stolen or destroyed ... Drivers go to work with fear in their bellies and the economic consequences are severe," he said.

Calais is one of the flashpoints of Europe's migrant crisis, resurgent in recent weeks as more people arrive on the continent's southern shores.

The site has also become the focus of political debate in both France and Britain.

Fears of growing numbers of migrants, partly fuelled by scenes from Calais, were a key issue influencing Britain's recent vote to quit the European Union.

Some French opposition politicians have also called for the ditching of an agreement under which border controls take place on the French side of the sea, saying Britain should handle the problem.

In February and March this year, French authorities dismantled the southern half of Calais' so-called "jungle" migrant camp and dispersed some of its inhabitants.