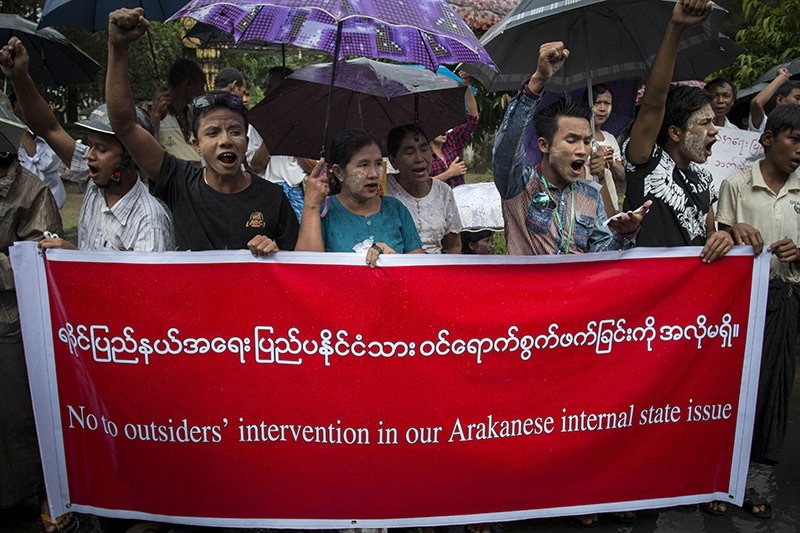 More than 1,000 hardliner Buddhists in a Myanmar state wracked by religious and ethnic strife protested Tuesday's arrival of former U.N. Secretary-General Kofi Annan, saying the Ghanaian is meddling in the country's affairs by leading a government-appointed commission to find solutions to the conflict.

"We came here because we don't want that foreigner coming to our state," said May Phyu, a local Rakhine Buddhist resident. "I don't know exactly what this group is and what they are doing, but I came here to protest as I don't like them to come here.

"I cannot accept them talking about the Rakhine and kalar case in our state," said protester Soe Thein. "Kalar" is a derogatory word used in Myanmar to refer to Muslims.

Many Buddhists in Rakhine and across Myanmar consider Rohingya to be Bangladeshis living in the country illegally, though the ethnic group has been in Myanmar for generations. Hundreds of Rohingya were killed and tens of thousands forced to flee their homes in 2012 unrest in Rakhine state, and many continue to be confined to squalid camps there.

"We are here to help provide ideas and advice," Annan said at the Rakhine state government office, where he met government and police officials, community leaders and members of nongovernmental organizations.

"To build the future, the two major communities have to move beyond decades of mistrust and find ways to embrace, share values of justice, fairness and equity," he said. "Ultimately, the people of Rakhine state must charge their own way forward."

Before Myanmar leader Aung San Suu Kyi's government created the commission, her international reputation as a Nobel Peace Prize-winning democracy icon had been diminished by what some have viewed as her inaction on the Rohingya issue. Her government still does not even use the word "Rohingya."

"You will see for yourself all the problems on the ground now," Suu Kyi, officially Myanmar state counselor and foreign minister, told Annan and other commission members at a news conference Monday. "You will be able to assess for yourself the roots of the problems itself, not in one day, not in one week. But I am confident that you will get there, that you will find the answers because you are truly intent on looking for them."

Annan, who has vowed to be impartial, met local Rakhine leaders and civil society groups in Sittwe shortly after his arrival.

Recognizing the highly-charged nature of the divisions in the state, he said his advisory commission would listen to all sides.

"This first visit is an opportunity to listen and learn from you, the local people," he said, as protesters continued to chant slogans outside the building where he made his brief remarks.

The Ghanaian diplomat is also expected to meet Muslim leaders and visit a camp where tens of thousands of Rohingya languish in poverty.

Annan is also scheduled to meet with President Htin Kyaw and military chief Min Aung Hlaing in capital Naypyidaw on the morning Sept. 8.

During their six-day Rakhine trip, the commission will visit the Rohingya camps and meet members of political and religious groups. But the Arakan National Party said it will not meet or work with the commission.

"Rakhine state is in Myanmar and our country has its own sovereignty and there is no way we can accept a commission that is formed by foreigners," ANP official Aung Than Wai said Tuesday.

The near one-million-strong Rohingya are largely denied citizenship and the government does not recognize them as an official ethnic minority.

Their appalling living conditions, including severe restrictions on movement, have pushed tens of thousands of them to flee, many via treacherous sea journey south towards Malaysia.

"We want him to come," said Hla Kyaw, a Rohingya man from The Chaung, a village outside Sittwe where many displaced Muslim families live in tents.

"If he comes, we will raise the issue of our citizenship status and our plight of staying in IDP (internally displaced persons) camps for four years," he added.

Last week sitting UN chief Ban Ki-Moon called on Myanmar to grant citizenship to the group and respect their right to self-identify as Rohingya.

But that question of identity remains incendiary for Buddhist hardliners.