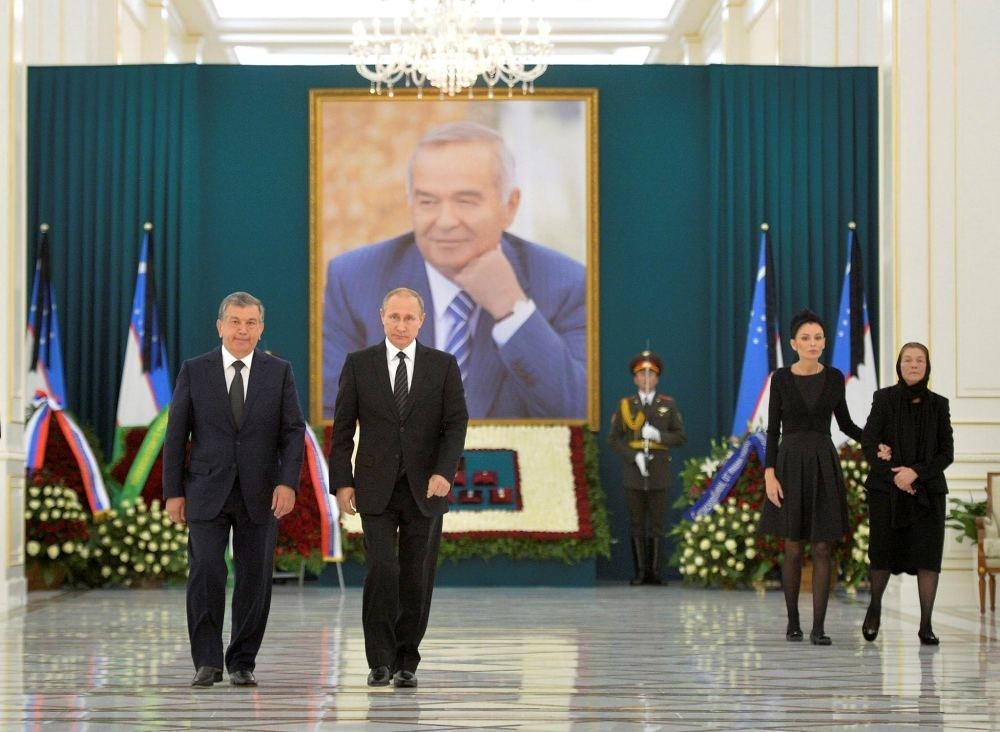 Russian President Vladimir Putin walks with Uzbek interim President Shavkat Mirziyoyev as he takes part in a wreath-laying ceremony in memory of Islam Karimov in Samarkand, Uzbekistan, Sept. 6.
by Daily Sabah with Wires Sep 09, 2016 12:00 am

Mirziyoyev, who was the official mourner-in-chief at Karimov's funeral and met Russian President Vladimir Putin this week, is widely expected to become the president of Uzbekistan. Under the Uzbek constitution, a presidential election must now be held within three months. Central Asia pundits say they do not expect any drastic policy changes if Mirziyoyev, a former regional governor, is duly elected president of the mainly Muslim nation of 32 million people that borders Afghanistan. Karimov's other successor were Deputy Prime Minister Rustam Azimov and country's National Security Service chief Rustam Inoyatov.

Three days before the announcement of the interim President, Russian President Vladimir Putin pledged his support to the man emerging as the likely next leader of Uzbekistan. During his visit to Uzbekistan in order to pay his respects to President Islam Karimov, Russia Putin was shown on state television embracing Prime Minister Shavkat Mirziyoyev, the favorite to succeed the authoritarian leader. The way Putin's visit was stage-managed pointed strongly to Mirziyoyev having already taken on the mantle of his successor.

Mirziyoyev carried out the role of Putin's principal host. The two were shown chatting at the graveside, and embracing warmly at Samarkand airport. Putin also met Karimov's widow, Tatiana, and his younger daughter, Lola Karimova-Tillyaeva. Mirziyoyev, in turn, told Putin his visit "says a lot". "We will continue to develop that bridge which you had been building together with Islam Abduganiyevich for so many years in order not to break it, but to further solidify it," he said.

The visit by Putin highlighted the competition among world powers for influence in resource-rich and strategically located Central Asia, the region in which Uzbekistan is located. Hours before Putin's arrival, Daniel Rosenblum, Deputy Assistant Secretary for Central Asia at the U.S. Department of State, told reporters in Tashkent he had met Uzbek Foreign Minister Abdulaziz Komilov the previous evening.

Uzbek President Islam Karimov, who has ruled the country with iron-fist since the collapse of Soviet Union in 1991, passed away on Sept. 2 after being intensive care for cerebral hemorrhage. His death reflects the first transfer of power in the Central's Asia's most populous nation for nearly 27 years. During his long rule of power, Karimov saw himself as the protector of his Central Asian nation against the threat of militants. To his critics, he was a brutal dictator who used torture to stay in power.

Under his rule, Uzbekistan, a country of 32 million people straddling the ancient Silk Road that links Asia and Europe, became one of the world's most isolated and authoritarian nations. Uzbekistan's relations with the United States and the European Union were frozen after his troops brutally suppressed a popular uprising in the eastern town of Andizhan in May 2005. Hundreds of civilians were killed, according to reports by witnesses and human rights groups. Karimov shut down a U.S. military air base in Uzbekistan, established after the 9/11 attacks by al-Qaida on the United States. The West imposed a set of sanctions on Uzbekistan and slapped a visa ban on senior Uzbek officials, prompting Karimov to seek improved ties with Soviet-era overlord Russia. But as the West slowly softened its stance on Uzbekistan, a producer of cotton, gold and natural gas, Karimov provided a vital transit route for cargo supplies for the U.S.-led war in neighboring Afghanistan.
RELATED TOPICS