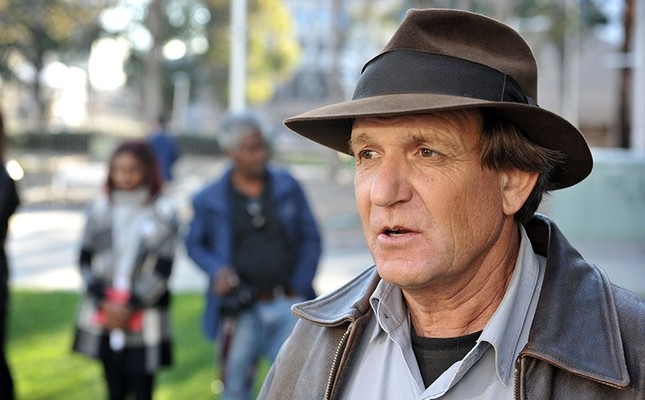 US amateur investigator Blaine Gibson speaks to the media after a meeting with the Australian Transport and Safety Bureau and the Joint Agency Coordination Centre in Canberra on September 12, 2016. (AFP Photo)
by Sep 12, 2016 12:00 am
An American amateur investigator handed possible debris from missing flight MH370 to Australian officials Monday and said several pieces were blackened by flames, raising the prospect of a flash fire onboard.

Mystery has surrounded the fate of Malaysia Airlines flight MH370 since it disappeared on March 8, 2014, carrying 239 passengers and crew on a routine flight from Kuala Lumpur to Beijing.

The Boeing 777 is believed to have crashed in the southern Indian Ocean after inexplicably veering off course, but its final resting place has not been found despite an intense underwater search off Australia's far west coast.

The Australian Transport Safety Bureau (ATSB), which is coordinating the search, said Blaine Gibson had handed over unspecified debris on Monday.

"We are seeking advice from the Malaysian authorities regarding how they would like to proceed," an ATSB spokesman told AFP.

Gibson, a lawyer from Seattle who has travelled the world trying to solve the MH370 mystery, told local reporters the debris which had washed up in Madagascar included what appeared to be an internal panel.

He has handed his findings to authorities in the past and said he had brought the recently found pieces to Australia for forensic investigation.

"The top layer of paint has been singed, scorched black," he told Channel 7 of one piece. "It also shows some signs of melting... as you see when something is exposed to fire.

"It appears to be from the interior of the plane but not the main cabin, perhaps the cargo hold, perhaps the avionics bay."

Gibson told the Australian Broadcasting Corporation that the pieces could be a "real game changer" if they were found to belong to MH370.

Gibson has said he is paying his own travel costs and searching for the missing aircraft "just out of personal interest".

The debris was handed over as eight relatives of those onboard the flight had a private visit with ATSB officials.

The relatives from China, Malaysia and Indonesia had earlier been shown around one of the search vessels in Western Australia.

Canberra has been leading the massive search for MH370 within the 120,000-square-kilometre (46,000-square-mile) search zone set to be fully scoured by December.

But the underwater hunt has so far failed to find a single piece of debris from the plane, fuelling speculation that the crash site may be outside the current search zone.

The zone was defined under the "most likely" scenario that no one was at the controls as the plane ran out of fuel.

The first piece of debris found from MH370 -- a two-metre wing part known as a flaperon -- washed up on the French Indian Ocean island of Reunion in July 2015.

Since then a range of debris linked to the flight has been found along western Indian Ocean shorelines.