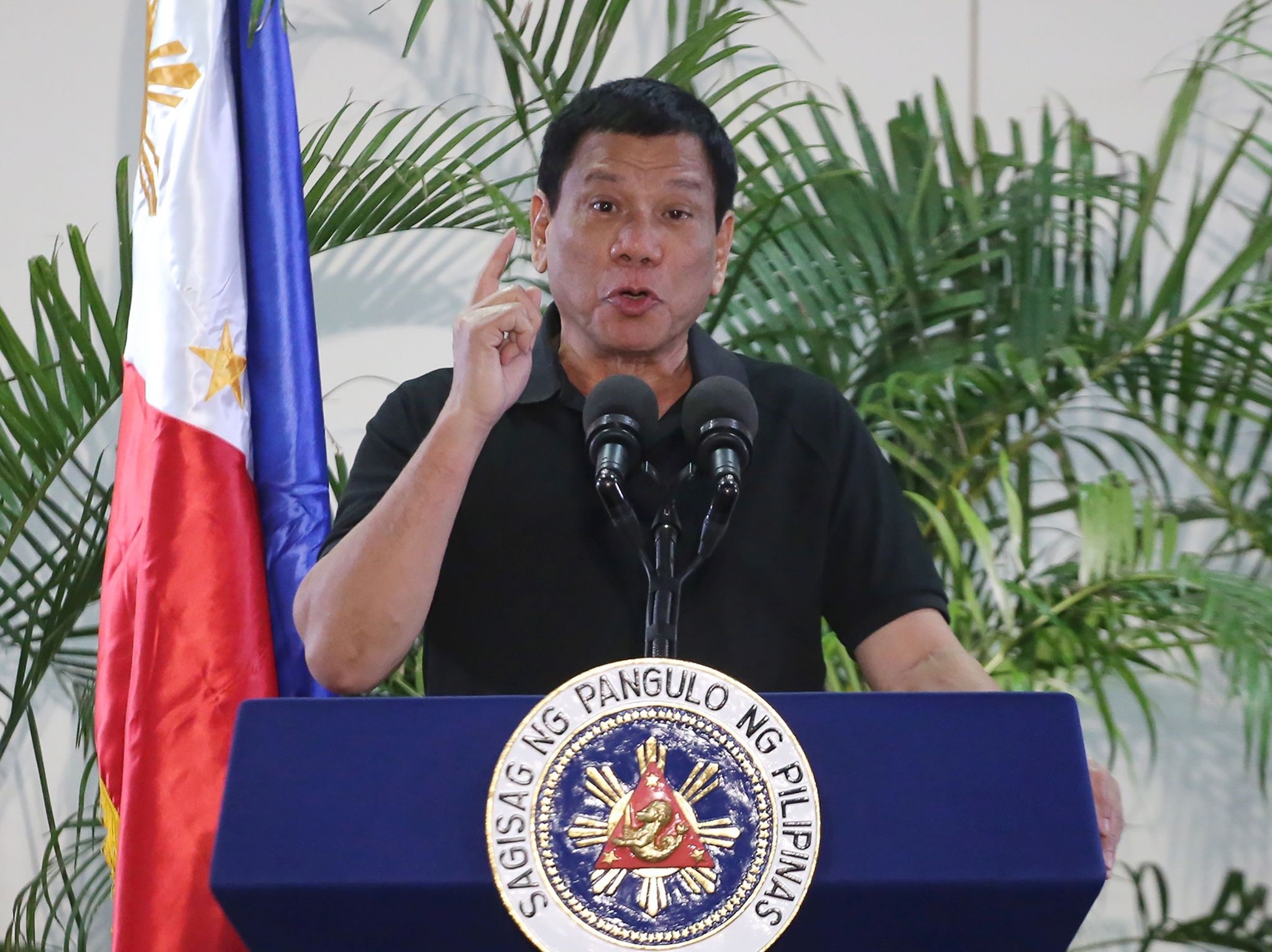 Philippines President Rodrigo Duterte delivers a speech at the Davao international airport terminal building early on September 30, 2016, shortly after arriving from an official visit to Vietnam. (AFP Photo)
by Sep 30, 2016 12:00 am

Philippines President Rodrigo Duterte appeared to liken himself to Nazi leader Adolf Hitler on Friday and said he would "be happy" to exterminate three million drug users and peddlers in the country.

His comments triggered shock and anger among Jewish groups in the United States, which could add to pressure on the U.S. government to take a tougher line with the Philippines leader.

Duterte recently insulted President Barack Obama and in a number of remarks he has undermined the previously close relationship between Manila and Washington.

In a rambling speech on his arrival in Davao City after a visit to Vietnam, Duterte told reporters that he had been "portrayed to be a cousin of Hitler" by critics.

Noting that Hitler had murdered millions of Jews, Duterte said, "There are three million drug addicts (in the Philippines). I'd be happy to slaughter them."

"If Germany had Hitler, the Philippines would have ...," he said, pausing and pointing to himself.

"You know my victims. I would like (them) to be all criminals to finish the problem of my country and save the next generation from perdition."

Duterte was voted to power in a May election on the back of a vow to end drugs and corruption in the country of 100 million people. He took office on June 30 and over 3,100 people have been killed since then, mostly alleged drug users and dealers, in police operations and vigilante killings.

"Duterte owes the victims (of the Holocaust) an apology for his disgusting rhetoric," Cooper said.

The Anti-Defamation League, an international Jewish group based in the United States, said Duterte's comments were "shocking for their tone-deafness".

"The comparison of drug users and dealers to Holocaust victims is inappropriate and deeply offensive," said Todd Gutnick, the group's director of communications. "It is baffling why any leader would want to model himself after such a monster."

United Nations spokesman Stephane Dujarric said any use of "the Holocaust and the suffering of the Holocaust in comparison to anything else, frankly, is inappropriate and needs to be rejected." He said Secretary-General Ban Ki-moon had made clear that the fight against illegal drugs must be done "in accordance with human rights standards."

State Department spokeswoman Anna Richey-Allen reiterated U.S. concern about "reports of extrajudicial killings by or at the behest of government authorities" in the Philippines, but offered no response to Duterte's Hitler comments.

A White House official stuck to a strategy of stressing long-standing ties with Manila, saying, "We continue to focus on our broad relationship with the Philippines and will work together in the many areas of mutual interest."

Two days before the Philippines election, outgoing President Benigno Aquino had warned that Duterte's rising popularity was akin to that of Hitler in the 1920s and 1930s.

Duterte has been scathing about criticism of his anti-drugs campaign and has insulted the United Nations and the European Union, as well as Obama, at various times in recent weeks.

On Friday, reacting to critical comments on his war on drugs by U.S. Senators Patrick Leahy and Benjamin Cardin, Duterte said: "Do not pretend to be the moral conscience of the world. Do not be the policeman because you do not have the eligibility to do that in my country."

He also reiterated there will be no annual war games between the Philippines and the United States until the end of his six-year term, placing the longstanding alliance under a cloud of doubt. It also may make Washington's strategy of rebalancing its military focus towards Asia in the face of an increasingly assertive China much more difficult to achieve.

A senior U.S. defence official, also speaking earlier, told reporters that the United States had a long enduring relationship with the Philippines regardless of who was president.

Murray Hiebert, a Southeast Asia expert at the Center for International and Strategic Studies think tank in Washington, said Obama was "taking the long view" in dealing with Duterte. Obama leaves office in January.

Malcolm Cook, a senior fellow at Singapore's ISEAS Yusof Ishak Institute, said the U.S-Philippines alliance was not necessarily at risk, but Washington could seek to focus on ties elsewhere in the region.

"We are all in some sense becoming, by necessity, desensitised to Duterte's language," he said.