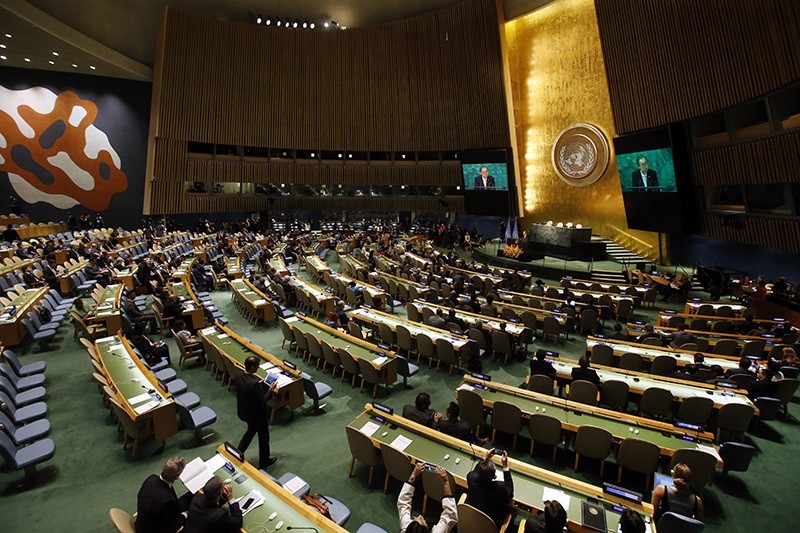 UN Secretary General Ban Ki-moon addresses a high-level event on the entry into force of the Paris Agreement on climate change during the 71st session of the U.N. General Assembly (AP Photo)
by Oct 02, 2016 12:00 am
India has said it would be ratifying the Paris climate agreement on Sunday and would push strongly for the protection of the rights of developing nations at the Marrakesh Climate Change Conference in November.

India had taken time to ratify the deal as it wanted to assess the impact of the agreement on domestic laws and take into account the opinions of different stakeholders, India's Forest and Environment Minister Anil Kumar Dave said.

"We had to make sure that when we move forward towards execution of the agreement, our interests are protected," Dave said. "By our we mean all developing countries of which India has assumed a leadership role," the minister added.

Dave was briefing reporters Saturday after Indian President Pranab Mukherjee gave his assent to the ratification. "It took us till [the] end [of] September to complete these tasks," Dave said.

Dave said that at Morocco, where the next session of the UN-sponsored climate change talks are to be held, India would strongly raise the issues of finance and technology transfer to developing nations to help them combat climate change.

The next session of the United Nations-sponsored Conference of the Parties (COP 22) is scheduled for November 7-18 in Marrakesh, Morocco.
Last Update: Oct 02, 2016 10:48 am
RELATED TOPICS