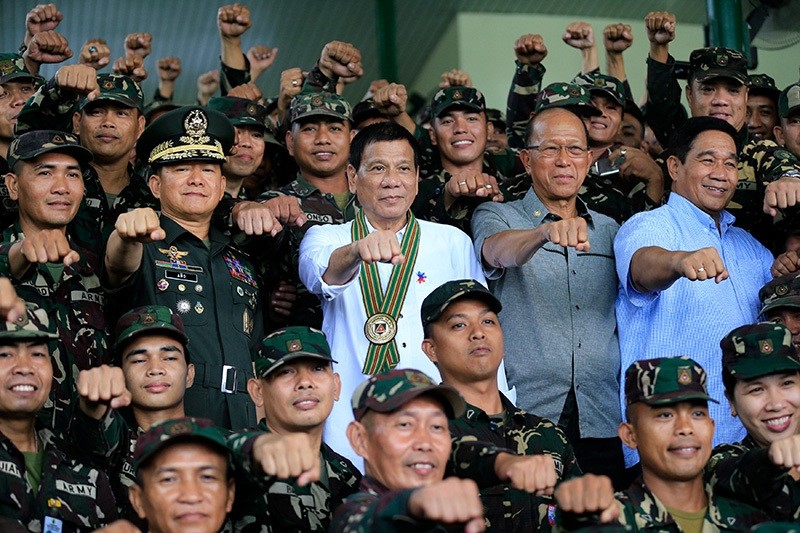 Philippines President Rodrigo Duterte (C) clenches fist with members of the Philippine Army during his visit at the army headquarters in Taguig city, metro Manila, Philippines October 4, 2016. (Reuters Photo)
by Oct 04, 2016 12:00 am

The Philippines and the United States launched war games on Tuesday against the backdrop of the unusual threat of American forces being ejected from the Southeast Asian nation, as its firebrand leader pivots to China.

President Rodrigo Duterte has sustained a verbal assault on the United States, the Philippines' former colonial ruler and mutual defense partner, since he took office on June 30 in response to criticism of his deadly war on crime.

Duterte told President Barack Obama "you can go to hell" in his latest tirade against the U.S. over its criticism of his deadly anti-drug campaign. He also lashed out anew at the European Union in a speech Tuesday saying the 28-nation bloc, which has also criticized his brutal crackdown, "better choose purgatory, hell is filled up."

Duterte has in recent days warned the war games will be the last of his six-year term, and threatened to scrap a defense pact implemented by his predecessor that was meant to see more US troops in the Philippines to counter Chinese expansion in the South China Sea.

"Better think twice now because I will be asking you to leave the Philippines altogether," Duterte said on Sunday in his latest outburst against the Americans, full of typical invective.

"The Americans, I don't like them... they are reprimanding me in public. So I say: 'Screw you, fuck you'," he said, while signaling again that he wanted to forge closer alliances with China and Russia.

Last week Duterte, 71, also claimed the CIA was plotting to assassinate him.

This came after he branded Barack Obama a "son of a whore" in response to being told the US president planned to raise human rights concerns over his drug war.

Duterte has vowed to eradicate illegal drugs in the Philippines, warning the nation is in danger of becoming a narco-state.

His crime war has seen more than 3,000 people killed, with the United Nations, the European Union and rights groups raising concerns about alleged extrajudicial killings and a breakdown in the rule of law.

Duterte has insisted he is not doing anything illegal, yet at the same time said he would be "happy to slaughter" three million drug users.

He also likened his crime war to Nazi leader Adolf Hitler's effort to exterminate Jews, but following an outcry apologized for referring to the Holocaust.

A total of around two thousand troops from the two sides are taking part in the war games, including in waters close to flashpoint areas of the South China Sea.

China claims nearly all of the sea, even waters close to the Philippines and other Southeast Asian nations, and has in recent years built artificial islands in the disputed areas, capable of hosting military bases.

To counter China, the Philippines' previous president, Benigno Aquino, sought to draw the United States closer. This included the signing of the Enhanced Defense Cooperation Agreement that Duterte now wants to scrap.

Duterte appears intent on adopting the opposite tactic, saying recently he hopes to travel to China and meet with President Xi Jinping.

However Duterte has declined to use the verdict to pressure China.

He has also said there will be no joint patrols with the United States in the sea.

Still Duterte's comments have not filtered down into government policy, and it remains unclear to what extent he is prepared to damage ties with the United States.

"I am confident that we will continue to build our partnership and capabilities together," the 3rd US Marine Expeditionary Force deputy commander, Brigadier General John Jansen, said at the opening ceremony in Manila.

The US Embassy in Manila urged the Philippines on Tuesday to live up to previous agreements.

"We will continue to honor our alliance commitments, and we expect the Philippines to do the same," embassy spokeswoman Molly Koscina told AFP.

Philippine defense department spokesman Arsenio Andolong told AFP on Monday the military relationship with the US "has not changed as of today".