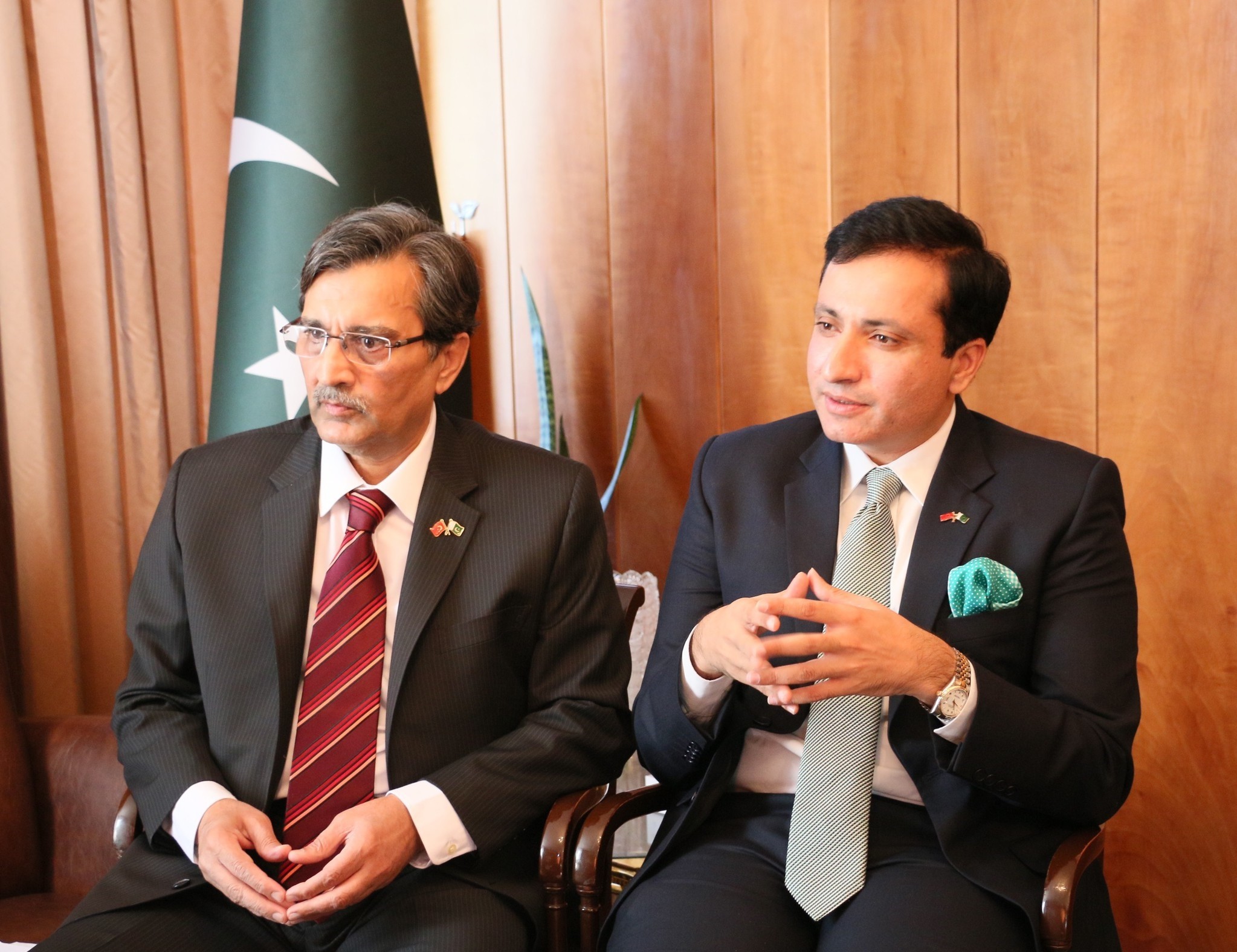 Special Envoys of the Prime Minister of Islamic Republic of Pakistan and members of Pakistanu2019s National Assembly Mohammad Pervaiz Malik and Mohsin Shah Nawaz Ranjha.
by Merve Aydoğan Oct 12, 2016 12:00 am

In an exclusive interview, the Pakistani prime minister's special envoys highlight the gross violations of human rights in Indian-occupied Jammu and Kashmir, stressing that a U.N. resolution should be made 'in accordance with the will of the Kashmiri people' to end one of the world's oldest disputes

In late September, tensions between Pakistan and India over the Indian-occupied Kashmir (IOK) region escalated once more. In an exclusive interview with Daily Sabah, the Special envoys of the prime minister of the Islamic Republic of Pakistan and members of Pakistan's National Assembly, Mohammad Pervaiz Malik and Mohsin Shah Nawaz Ranjha, stressed that the Kashmir dispute can be solved at the United Nations level "through the democratic method of a free and impartial plebiscite conducted under the auspices of the United Nations."

The Pakistani prime minister's special envoys stressed that a U.N. resolution should be compatible with "the will of the Kashmiri people."

"Our position on the settlement of the Jammu and Kashmir dispute is consistent with the U.N. Security Council Resolutions. Sadly, India continues to shy away from this reality, and is instead dragging the entire region down the precipice of conflict. The international community, especially the U.N. Security Council, has the moral responsibility to call on India to accept this solution to end one of the longest disputes of modern times."

"It is interesting to note that it was India that took this dispute to the U.N. Security Council, which, through its numerous resolutions, declared that the final disposition of the State of Jammu and Kashmir would be made in accordance with the will of the people, expressed through the democratic method of a free and impartial plebiscite, conducted under the auspices of the U.N. Unfortunately, India has refused to implement the U.N. Security Council resolutions for over 68 years."

In order to attain peace in the region, the Pakistan prime minister addressed the U.N. General Assembly last month, stating that "peace and normalization between Pakistan and India could not be achieved without a resolution of the Kashmir dispute" and reiterating Pakistan's offer to India to enter into "a serious and sustained dialogue for the peaceful resolution of all outstanding disputes, especially Jammu and Kashmir."

Pakistan has also urged the international community to "fulfill its moral and legal obligation" by giving Kashmiris the chance to realize their inalienable right to self-determination in accordance with the Security Council resolutions. In a bid to highlight the human rights violations in the Kashmir region, Pakistan's Prime Minister Nawaz Sharif nominated 22 parliamentarians as special envoys to be dispatched to world capitals.

The Pakistani government has aimed to "arrange medical treatment of those who have been crippled or have lost their eyesight due to the use of pellet guns; and conduct a fair, independent and transparent inquiry under the U.N. auspices to hold the perpetrators of these heinous acts responsible.""We are also calling for the immediate release of all Kashmiri political prisoners; an end to the curfew that has virtually imprisoned the Kashmiri people in the IOK; freedom for Kashmiris to demonstrate peacefully; abrogation of India's draconian measures in IOK; and removal of the foreign travel ban on IOK leaders."

The envoys condemned the "arbitrary use of force" by India during the latest protest in July, saying that, "More than 110 innocent Kashmiri protestors lost their lives, and more than 12,000 were injured, many in critical condition. In gross contravention of all norms of international law and international humanitarian laws, the Indian police resorted to the use of live ammunition and pellet guns to quell peaceful protests by unarmed civilians, resulting in the death of dozens of Kashmiris, and causing lifelong and debilitating injuries to hundreds of others. More than 700 people suffered severe eye injuries due to the use of pellet guns by the Indian occupation forces and more than 150 have become permanently blind."

Considering Pakistan-Turkey relations, the Pakistani envoys stressed Turkey's importance in de-escalating the tension and solving the ongoing dispute. "Turkey is an important regional and international power, that has over the years played a critical role in international peace and stability. It has always supported Pakistan's principled position on the Jammu and Kashmir dispute. It is an important member of the Organization of Islamic Cooperation (OIC) and plays an active role within the OIC Contact Group on Jammu and Kashmir to highlight the human rights violations in IOK and support the realization of the right to self-determination of the people of Jammu and Kashmir. Turkey has been playing, and we have no doubt, will continue to play its role towards resolution of this dispute at all international forums as well as through its diplomatic outreach."
RELATED TOPICS