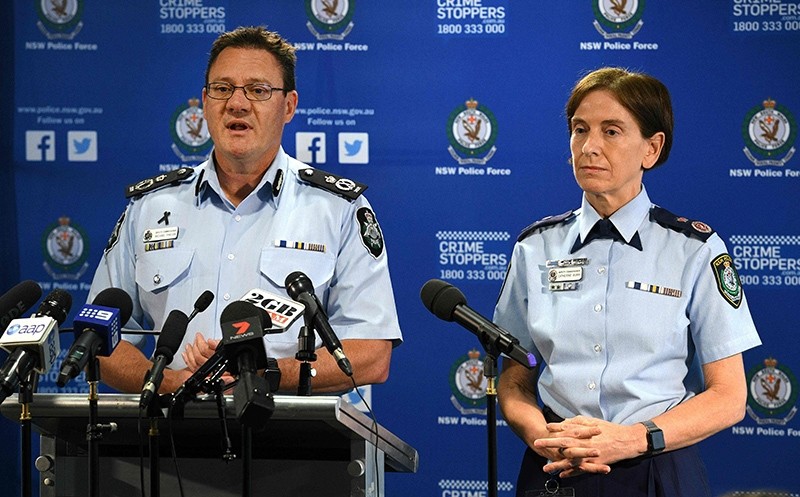 Two 16-year-old boys were charged Thursday with planning an imminent terror attack after being arrested with "bayonet-type" knives in Sydney, with police saying the pair were inspired by the Daish terorrist group.

The boys, who were not named, were seized in the city's southwest after buying the weapons in a shop.

They face life imprisonment if convicted on charges of "acts done in preparation, or planning, terrorist acts", and membership of a terror organization.

Police reportedly also found a note in which they allegedly pledged allegiance to the Daish terrorist organization.

The two allegedly purchased the knives from a gun shop before catching a bus to a nearby location, where they were arrested by police.

Police were unable to say what their intended target was but said they believed an attack was imminent.

"Had we not been in the right place at the right time ... certainly somebody, potentially today ... or another day imminently, would be without their life," Australian Federal Police deputy commissioner Michael Phelan said.

The boys were charged with preparing for or planning to conduct a terrorist act and if convicted the maximum penalty they could face is life imprisonment, police said.

They were also charged with attempting to join the Daish terrorist organization and were refused bail due to the seriousness of their offences.

One of the boys is believed to be the son of a convicted terrorist who is in jail, local media reported, and police said the pair had "connections with people who are radicalized and who are of concern to us."

Burn said the age of the boys was also worrying.

"The fact we are putting two teenagers before the court on such serious charges reflects the ongoing threat we face," Burn told reporters in Sydney.

"Fortunately, the excellent cooperation between state and federal agencies has prevented a very disturbing crime. The need for ongoing vigilance has never been greater."

Australian Justice Minister Michael Keenan said in a statement that since the national terrorism threat level was raised on 12 September 2014, there have been four attacks and 11 major counter-terrorism disruption operations in Australia,

"There has been an ongoing and disturbing trend of not only more Australians, but increasingly, younger Australians subscribing to terrorist ideologies," he said.

"Both of these youths have previously come to police attention."

In September a 22-year-old Sydney man, inspired by Daish, stabbed an elderly man multiple times and then tried to attack a police officer in the south-western Sydney suburb of Minto.

Earlier that month, Daish issued a directive for its followers to conduct "lone wolf attacks" targeting iconic Australian attractions such as the Opera House and Bondi Beach.

"Stab them, shoot them, poison them, and run them down with your vehicles. Kill them wherever you find them," the directive said.

The Australian government has become increasingly concerned about homegrown terrorism and the terror threat level was raised in September 2014.

Canberra is also worried about its citizens fighting with terrorist organisations such as Daish in Iraq and Syria and helping radicalize others.