Philippines realigns with China with President Duterte saying 'US has lost' 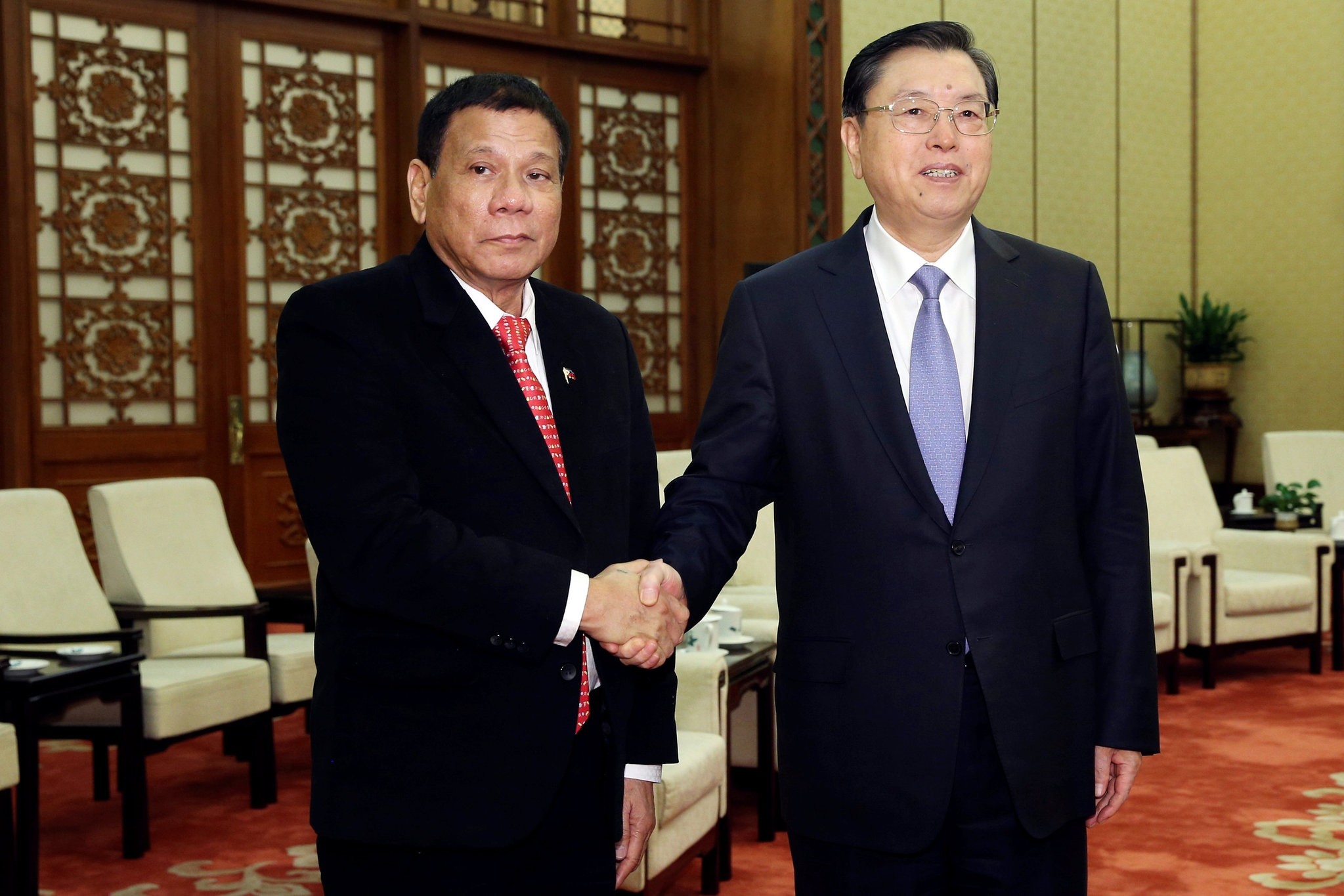 Philippines President Rodrigo Duterte (L) shakes hands with Zhang Dejiang, Chairman of the Standing Committee of the National People's Congress of China ahead of a meeting at the Great Hall of the People in Beijing, China, 20.10.2016. (Reuters Photo)
by Anadolu Agency Oct 21, 2016 12:00 am

After months of allegations and apologies, the Philippines president appears to have followed through on his threat to cut age-old ties with the United States.

Following a bilateral meeting with his Chinese counterpart, Xi Jinping, on Thursday, Rodrigo Duterte declared in Beijing's Great Hall of the People that the Philippines would split from its one time colonial master and realign with China.

"In this venue, I announce my separation from the United States, both in military, not social… and economic," the Manila Bulletin quoted Duterte as saying in impromptu remarks at the Philippine-China Trade and Investment Forum.

The president said he intends to "realign" with China and Russia and would meet with President Vladimir Putin and tell him that "there are [now] three of us against the world."

Duterte underlined that it was already "checkmate" for the U.S. as he had publicly rebuked the country for its unfair treatment of the Philippines.

He added that criticism levelled at his administration for alleged extrajudicial killings linked to his campaign against illegal drugs had caused him particular annoyance.

The Philippine Daily Inquirer said the presidential statement had come after a seemingly fruitful meeting with Xi, where several agreements were forged.

In Washington, State Department spokesman John Kirby said Duterte's remarks were "inexplicably at odds with the very close relationship" between the two countries.

"We are going to be seeking an explanation of exactly what the president meant when he talked about separation from us," Kirby said. "It's not clear to us exactly what that means and all its ramifications."

He added that the assistant secretary Daniel Russel would travel to the Philippine capital, Manila, this weekend and meet with Filipino officials.

China and the Philippines have agreed to sign $14.5 in deals during Duterte's state visit and China has also lifted an advisory to its citizens against travel to the Philippines.

On Wednesday, Duterte announced it was "time to say goodbye" to the U.S., saying he was fed up with what he called the "Western agenda" and accused the US of only maintaining links for its own benefit.

"So time to say goodbye, my friend," he said.

"What kept us from China was not our own making. I will charter a new course."

He added that he would no longer even travel to America, as he would just be insulted there.

And then in an echo of a previous comment, he once again referred to U.S. President Barack Obama as a "son of a whore".

Duterte arrived in China on Tuesday and he leaves Friday.

The trip is his first official visit to a foreign country outside of regional block the Association of Southeast Asian Nations (ASEAN) since he took office.