At least 60 killed in attack on Pakistan police training college 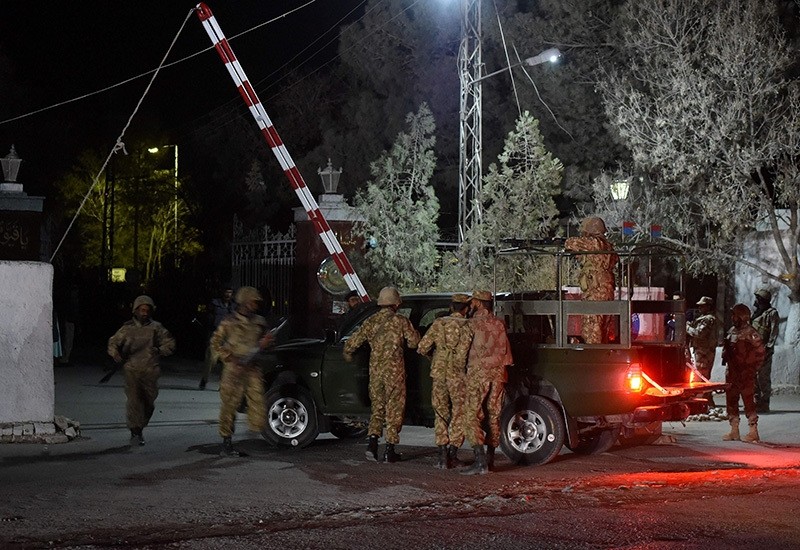 Dozens of people have been killed in an attack on a police training college outside Quetta in north-western Pakistan, a local police official confirmed Tuesday. The Daesh terrorist organization claimed responsibility for the deadly attack later on.

"At least 60 people are dead and more than 120 are injured," said Quetta police official, Muhammad Khan.

Balochistan Home Minister Safraz Bugti said Tuesday morning the security operation to clear the attackers from the academy had ended.

"Two suicide attackers blew themselves up, which resulted in casualties, while the third one was shot dead by our troops," local military official Major General Sher Afgan said, in comments published by the Dawn newspaper.

Major General Sher Afgan, chief of the paramilitary Frontier Corps in Balochistan, which led the counter-operation, said "the attack was over in around three hours after we arrived".

He added that communications intercepts showed the militants belonged to the Al-Alimi faction of the Lashkar-e-Jhangvi militant group - which is affiliated with the Pakistani Taliban.

The attackers took 250 people hostage who were later freed once the facility was cleared, he added.

Quetta is the provincial capital of Balochistan. Baloch nationalists have been fighting government forces for well over a decade for greater control over local mineral resources. Some of the hardliners among them demand the province's separation from Pakistan.

In August, a suicide bomber killed more than 70 people - most of whom were lawyers who had gathered to mourn the death of a colleague - at a hospital in Quetta.

Monday night's attack also came a day after separatist gunmen for the Baloch Liberation Army on a motorcycle shot dead two coast guards and a civilian and wounded a shopkeeper in a remote southwest coastal town in the same province.

Pakistan has improved its security situation in recent years, but terrorist groups continue to pose a threat and stage attacks in the mainly Muslim nation of 190 million.

Daesh has sought to make inroads over the past year, hoping to exploit Pakistan's sectarian divisions.

Monday night's assault on the police college was the deadliest in Pakistan since a suicide bomber killed 70 people in an attack on mourners gathered at a Quetta hospital in August. That attack was claimed by Daesh, and also by a Pakistani Taliban faction, Jamaat-ur-Ahrar.

The military had dismissed previous Daesh claims of responsibility as "propaganda", and last month said it had crushed the Middle East-based group's attempt to expand in Pakistan.

A photograph of the three alleged attackers released by Daesh showed one with a striking resemblance to the picture of a dead gunman taken by a policeman inside the college, and shared with Reuters.

Analysts say Daesh clearly has a presence in Pakistan and there is growing evidence that some local groups are working with it. "The problem with this government is that it seems to be in a complete state of denial," said Zahid Hussain, an Islamabad-based security analyst.

The White House condemned Monday's attack, and said the United States would support Pakistan in its fight against terrorism.