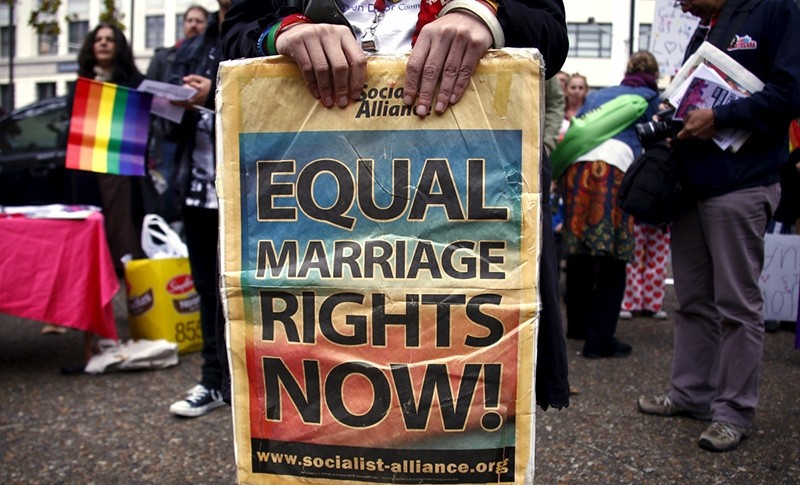 | Reuters Photo
by Nov 07, 2016 12:00 am
Australia's bid to hold a national vote on whether to legalize same-sex marriage was defeated on Monday in the upper house of parliament, or Senate, potentially delaying legal unions for years.

The proposal to hold the vote, or plebiscite, in February next year was voted down in the Senate by 33 votes to 29.

The bill required the support of some opposition lawmakers because Turnbull's Liberal-National coalition has only a one-vote majority in the lower house of parliament and does not have a majority in the upper house.

The rejection is a blow to Turnbull, who has seen his popularity wane amid frustration that he has failed to live up to his progressive reputation.

Australian Attorney-General George Brandis had warned that a defeat would result in delaying same sex marriage in Australia for years to come.

In opposing the vote, the opposition Labor Party said it would have resulted in harmful debate against the gay and lesbian community and instead sought a direct vote in Parliament.

"Now that the plebiscite legislation is dead, we again call marriage equality supporters across all political parties to work together to find a pathway," said Alex Greenwich, co-chair of rights group Australian Marriage Equality.

"It's time our parliamentarians found a fair and dignified pathway that ensures every Australian is treated equally."

There have only been three plebiscites in Australian history, two relating to conscription during World War I, and one to choose a national song in 1977.

Same-sex marriage is supported by 61 percent of Australians, a Gallup poll in August found.

Several independent MPs had already ruled out supporting the national plebiscite on same-sex marriage. A rejection by the centre-left Labor party, which wants same-sex marriages legalized by parliament, ended any hope the plebiscite bill could pass.

"It is at least insensitive to the LGBT community ... and at best, it will result in divisive hurtful campaigning with no guarantee of progressing marriage equality," she added.