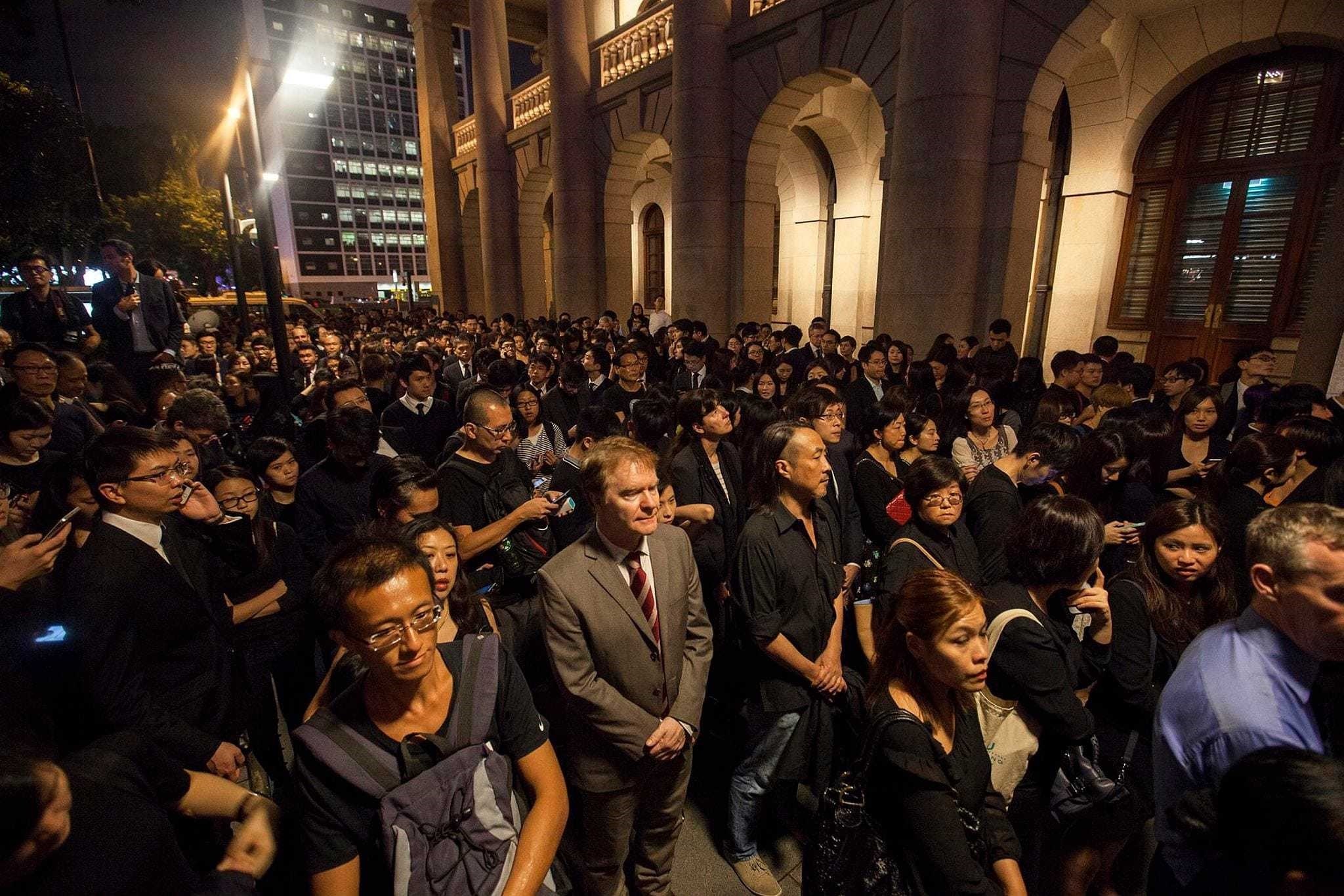 Members of Hong Kongu2019s legal community and law students from the University of Hong Kong gather outside the cityu2019s Court of Final Appeal during a silent protest against China on Nov. 8.
by Nov 09, 2016 12:00 am
Hundreds of Hong Kong lawyers dressed in black marched through the heart of the city in silence yesterday to condemn a move by China that effectively bars two elected pro-independence lawmakers from taking their seats in the legislature.

The former British colony returned to China in 1997 under a "one country, two systems" agreement that ensured its freedoms, including a separate legal system. But Beijing has ultimate control and some Hong Kong people are concerned it is increasingly interfering to head off dissent.

Local and foreign lawyers walked from the High Court to the Court of Final Appeal, underscoring growing concern among Hong Kong's legal elite with how Beijing has handled affairs in the "special administrative region" of Communist Party-ruled China.

The demonstration follows a decision by China's parliament to interpret Hong Kong's mini-constitution, or Basic Law, to effectively bar the independence lawmakers from taking their oaths of office.

"We want to express that interpretation is not the norm of the Hong Kong legal system," said legislator and barrister Dennis Kwok, who organized the rally. "We will not accept interpretation becoming the norm."

As the lawyers marched, about a dozen pro-Beijing protesters taunted them, some shouting obscenities through loudspeakers. One Beijing loyalist held up a placard that read: "Rioters mess up Hong Kong."

Beijing's ruling on Monday that oaths for Hong Kong lawmakers must be taken accurately, sincerely and solemnly for them to be valid, just as a local judicial review of the case was under way, rattled many in the legal profession, political circles and beyond.

The High Court is set to decide if pro-independence lawmakers Baggio Leung, 30, and Yau Wai-Ching, 25, may be disqualified after they displayed a "Hong Kong is not China" banner during a swearing-in ceremony in October which resulted in their oaths being invalidated.

Hong Kong has thrived as a financial and legal center thanks in part to its independent rule of law, which many now perceive to be under threat.

The Hong Kong Bar Association, which represents more than 1,000 barristers, expressed regret over the interpretation, saying it would "do more harm than good" and gave the impression that Beijing was effectively legislating for Hong Kong. The march was only the fourth such protest by the city's lawyers since 1997.

The last march, in June 2014, was in response to a white paper by China's cabinet that declared "loving the country" was a basic political requirement for all Hong Kong administrators, including judges and judicial personnel.

Hong Kong was also rocked by months of street protests calling for democracy in 2014 and more recently by calls for independence.