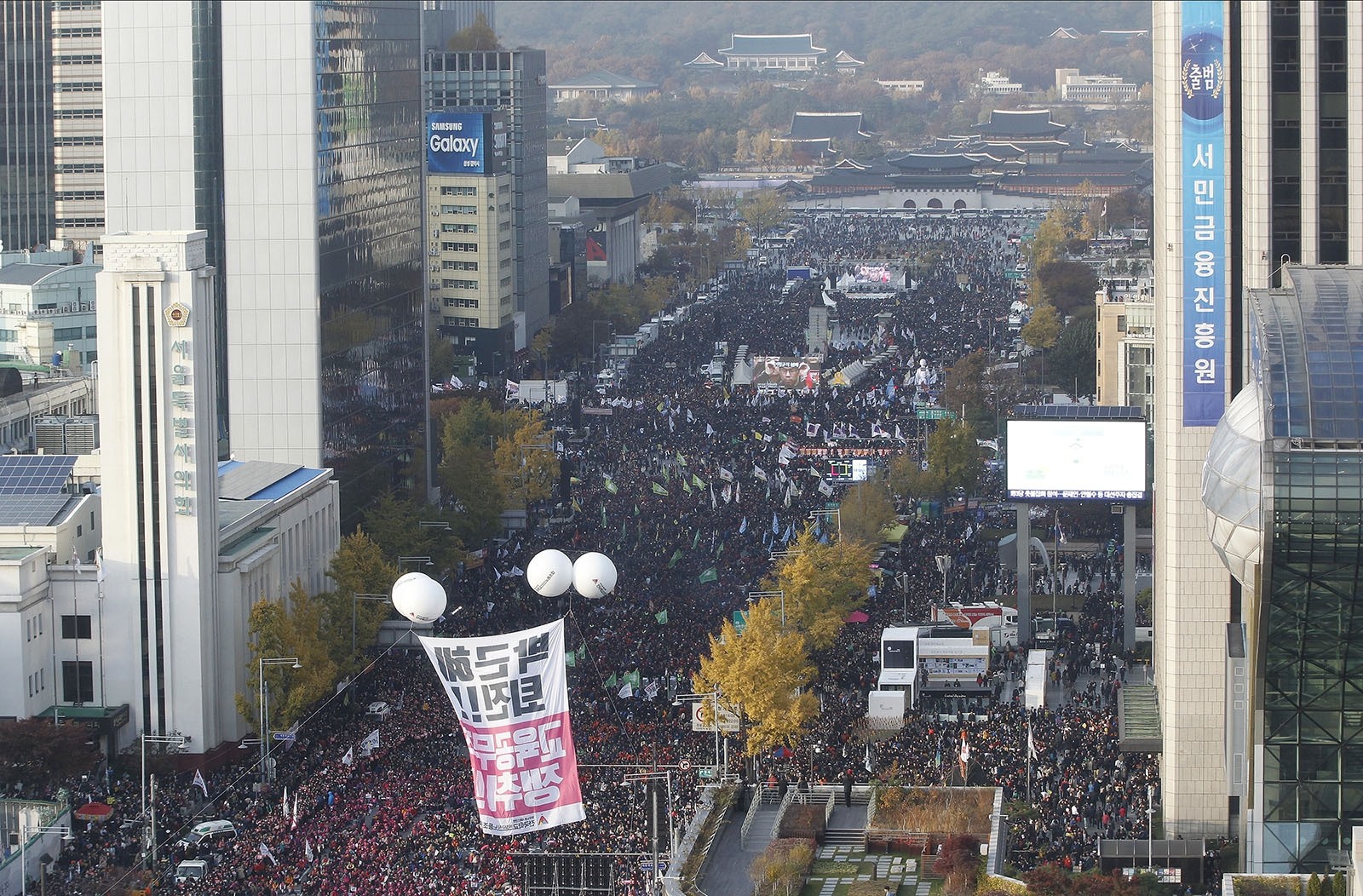 Hundreds of thousands of men, women and children joined one of the largest anti-government protests seen in Seoul for decades on Saturday, demanding President Park Geun-Hye's resignation over a snowballing corruption scandal.

Police had planned for 170,000 people, but organisers said they expected a final turnout of up to one million for what was the third in a series of weekly mass protests that have left Park fighting for her political survival.

On the back of official appeals for calm, police deployed around 25,000 officers, many of them in full riot gear, while police buses and trucks blocked every access road -- major or minor -- around the presidential Blue House.

As with the previous protests, the huge crowds were extremely mixed, with high school children rubbing shoulders with retirees and young couples marching with babies or young children.

The steady beat of drums and chanted slogans made for a raucous but largely peaceful atmosphere, with banners everywhere mocking Park and calling for her to step down immediately

In a televised news conference on Friday, Deputy Prime Minister Lee Joon-Sik had voiced concerns at the possibility of "illegal collective action or violence" and urged the protestors to respect police barriers.

The scandal engulfing Park is focused on a close personal friend, Choi Soon-Sil, who is currently under arrest on charges of fraud and abuse of power.

Prosecutors are investigating allegations that Choi, 60, leveraged their personal relationship to coerce donations from large companies like Samsung to non-profit foundations which she set up and used for personal gain.

She is also accused of interfering in government affairs, despite holding no official position.

Lurid reports of the unhealthy influence Choi wielded over Park have seen the president's approval ratings plunge to record lows.

"We are feeling the weight of the serious public mood," presidential spokesman Jung Youn-Kuk acknowledged Friday.

In an effort to soothe public anger, Park has issued several apologies, reshuffled top officials and even agreed to relinquish some of her extensive executive powers, but the popular calls for her to step down have been relentless.

"It was our wedding anniversary yesterday but we cancelled our anniversary trip and came to Seoul because we thought it was more important for our daughter," said Cho Joo-Pyo, who was at the rally with his wife and their two-year-old.

Cho's family had travelled from Jeonju, around 200 kilometres (120 miles) south of Seoul -- one of tens of thousands who took trains or buses from towns and cities across the country to demonstrate.

One group of 1,000 protestors even flew in from the popular southern resort island of Jeju.

"I'm here to demand Park Geun-Hye's resignation. Her apologies are meaningless. She needs to step down," said 66-year-old Cho Ki-Mang.

It was set to be one of the biggest anti-government rallies since the pro-democracy protests of the late 1980s and early 1990s.

A protest in June 2008 against then-president Lee Myung-Bak's decision to lift an import ban on US beef drew 80,000 people according to police, while organisers claimed 700,000 took part.

Most experts believe Park, who has just over a year left of her single five-year term, will be able to ride out the crisis and remain in office, albeit with her authority and ability to govern seriously undermined.

Opposition lawmakers have largely avoided direct resignation calls and appear more interested in extracting further concessions from Park in terms of devolving power to the legislature.

The candlelight rally began at 4:00 pm (0700 GMT) at Seoul City hall, with a plan to march along four different routes towards the Blue House.

A last minute court order removed some of the police road blocks, but the protestors were to be kept more than a kilometre away from Park's official residence.