Millions in India flock to banks to swap their currency notes 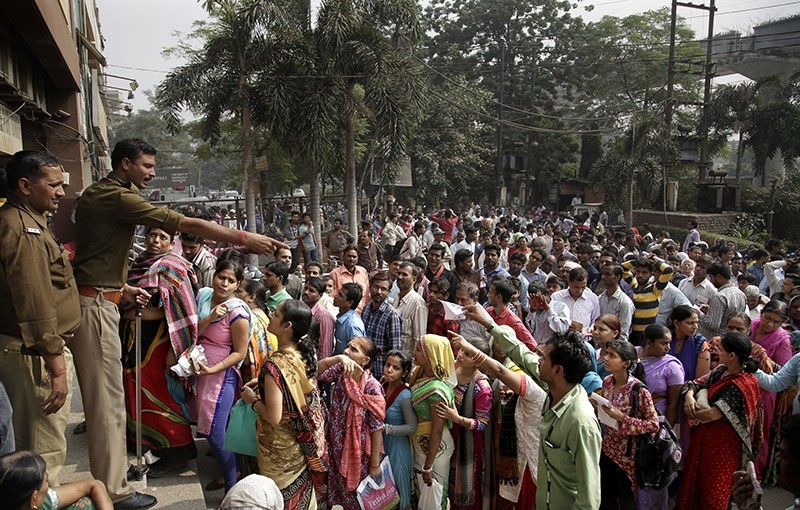 An Indian policeman asks people to wait patiently in queues to exchange or deposit discontinued currency notes, outside a bank in in New Delhi, India, Friday, Nov. 11, 2016. (AP Photo)
by Associated Press Nov 12, 2016 12:00 am

Chaotic scenes played out across India on Saturday, with long lines growing even longer and scuffles breaking out, as millions of anxious people tried to change old currency notes that became worthless days earlier when the government demonetized high-value bills.

In New Delhi, the capital, angry scuffles broke out after ATMs ran out of bills. Minor stampedes occurred at two banks in the city's old quarter when thousands of people waiting in line surged forward.

Paramilitary troops posted at banks in some of the most congested areas of the city walked among the crowds urging people to stay calm. Frustrations grew as reports came in that some banks had run out of new currency notes.

On Tuesday, India's government made a surprise announcement that all 500- and 1,000-rupee notes had no cash value, in an effort to tackle corruption and tax evasion.

"I am so angry at the lack of planning on the part of the government before taking such an enormous step," said Raju Sundaram, an office executive, waiting outside a bank in the south Delhi neighborhood of Saket.

Sundaram, who had been in a slow-moving line for four hours, said it was the third consecutive day he was lining up outside his bank. "On Thursday and Friday, they ran out of cash before my turn," he said, as he clutched a bunch of identity papers and a bottle of water.

But there were problems because more than half of India's more than 200,000 ATMs had not been reconfigured to dispense the new 2,000-rupee notes introduced by the government, according to Finance Minister Arun Jaitely. He said it would take two to three weeks for all the ATMs in the country to be recalibrated to handle the new notes.

"We knew at the outset that the replacement of this much currency cannot happen overnight. It is a massive operation, and it has only begun," Jaitely told reporters Saturday.

He said the changes in the cash dispensers could not have been done earlier because the government wanted to maintain secrecy about the demonetization.

Meanwhile, anger was mounting as people, frustrated with the delays and long hours spent in serpentine lines, lost their cool, lashing out at the government and bank employees.

"If it's bad outside the bank, it's complete chaos inside," said Suniti Kumar, a housewife, as she elbowed her way out of a bank through a restive crowd.

Many banks ran out of currency notes, and overworked bank staff who have been working long hours, or in shifts, appeared helpless.

"This is a hugely disruptive step," said a bank teller in Delhi's shopping hub of Connaught Place, as he stepped outside for a cigarette. "It required a lot more planning, but that didn't happen." He spoke on condition of anonymity because he was not authorized to speak to the media.

Delhi police said they received more than 3,000 emergency calls reporting fights and scuffles in the city Friday as people crowded outside banks, waiting to exchange notes or withdraw money.

On Saturday, nearly 200 calls had been received in the first four hours since the banks opened at 9 a.m. local time, according to police.

In the southern city of Kollam, furious crowds smashed glass panes and vandalized a bank after the manager announced to waiting clients that the bank had run out of new bills.