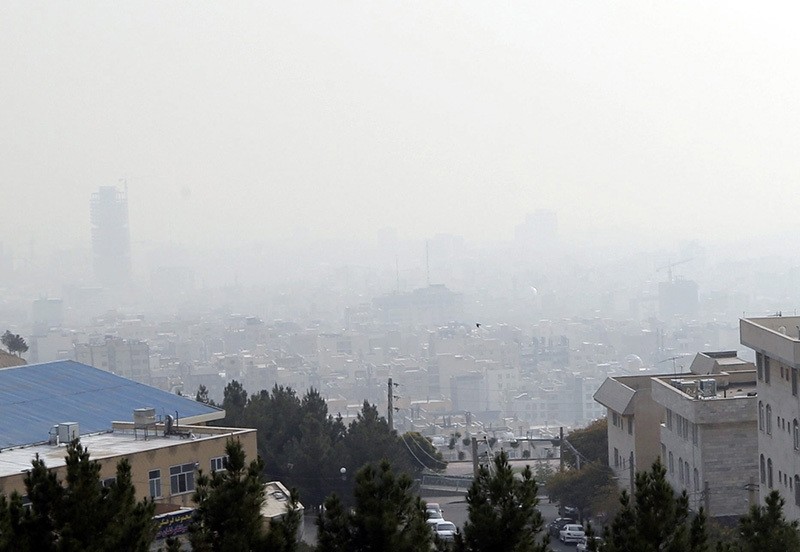 Smog obscures buildings in Tehran, Iran, 13 November 2016. Media reported about Tehran's air pollution, prompting the government to declare a one-day holiday schools in Tehran also they have warned elderly people to not go out for days. (EPA Photo)
by Nov 14, 2016 12:00 am

Tehran officials shut schools on Monday as the first of the winter season's heavy pollution hit the Iranian capital.

A blanket of choking brown-white smog descended on the city on Sunday, blocking out the view of the mountains that line its northern edge and leading many of its 14 million residents to retreat indoors or don face masks in the street.

The level of the deadliest PM2.5 particles hit 156 on Monday -- more than three times the level considered safe by the World Health Organization.

"Kindergartens and primary schools are closed on Monday in Tehran and most of the cities of the province," the Ministry of Education announced, according to official agency Irna.

Officials extended traffic restrictions that alternate cars with odd and even license plates in two central parts of the city, and deployed ambulances to wait in the busiest and dirtiest areas.

Tehran mayor Mohammad Bagher Ghalibaf rode the metro to work on Sunday in a bid to encourage people to use public transport.

Despite having around 100 stations, Ghalibaf says the metro is not sufficiently funded by the central government, and Tehran has some of the world's worst traffic congestion.

Residents were advised to stay indoors unless absolutely necessary, with warnings that pollution is particularly dangerous for the elderly, pregnant, children and those with existing respiratory and heart conditions.

The pollution has been building for six consecutive days and is expected to continue until Wednesday when forecasters hope winds will move the stagnant air, an official told state television.

Sand and cement factories around Tehran have been temporarily shut.

Every year, Tehran suffers some of the worst pollution in the world when cold weather traps the vast levels of exhaust from the city's 10 million ageing cars and motorbikes.

Two permanent zones of traffic restrictions introduced in 1979 and 2005 have failed to rectify the sprawling city's poor air quality. Local carmakers have shown little interest in introducing cleaner engines, while foreign firms have been kept out by international sanctions.

In 2014, almost 400 people were hospitalized with heart and respiratory problems caused by heavy pollution in Tehran, with nearly 1,500 others requiring treatment.

The health ministry estimated that pollution contributed to the premature deaths of 4,500 people in Tehran in 2012 and about 80,000 across the country.