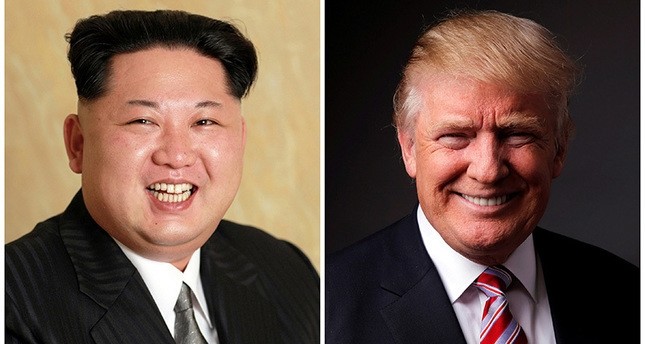 North Korean Supreme Leader Kim Jong-un (L) and U.S. President-Elect Donald Trump
by Nov 18, 2016 12:00 am
If a U.S. administration of Donald Trump withdraws troops and equipment from South Korea and secures a peace treaty ending war on the peninsula, it could lead to normalising relations with North Korea, a Pyongyang envoy told Reuters on Thursday.

But for now North Korea will pursue its policy of "simultaneous development" of both its nuclear programme and the economy, So Se Pyong, North Korea's Ambassador to the U.N. in Geneva said. "It will be continued."

So spoke in an interview at the diplomatic mission of the Democratic People's Republic of Korea (DPRK) in Geneva, as North Korean officials began "unofficial and informal discussions" with U.S. academics and former U.S. officials in the Swiss city.

"The (DPRK) delegation is here now. But as you know, it is a 'Track 2'," he said, referring to the latest informal meeting in a series this year. The two countries have had no official dialogue since Kim Jong Un assumed power in 2011.

Choe Son Hui, North Korea's negotiator for the stalled talks on its nuclear programme, leads the four-person team, he said.

North Korea has carried out repeated nuclear and missile tests in defiance of U.N. Security Council resolutions and sanctions.

Trump told Reuters in an interview in May he was willing to talk to Kim Jong Un to try to stop Pyongyang's nuclear programme - a major shift in U.S. policy toward the isolated nation - but has also called for China to do more to rein in its ally.

So, asked about North Korea's views on resuming dialogue, following Trump's remarks, replied: "The meeting is up to the decision of my Supreme Leader."

"If he (Trump) really gives up the hostile policy towards DPRK, withdrawing all the military equipment from South Korea, including the U.S. troops and coming to conclude the peace treaty, then I think it might be an opportunity to discuss the relations as we did in the 1990s."

There are about 28,500 U.S. troops based in South Korea helping to defend the country against nuclear-armed North Korea, which has remained in a technical state of war with the South since the 1950-53 Korean conflict.

The Obama administration's lack of engagement had allowed Pyongyang to develop its nuclear programme and "lighten the weapon warheads", said So.

Trump pledged his commitment to defending South Korea under an existing security alliance during a phone call with South Korean President Park Geun-hye, her office said a week ago.

So denounced a draft resolution approved in a U.N. General Assembly committee last week condemning "widespread and gross violations of human rights" in his country. He expected the text to go before the General Assembly next month.

So, asked whether North Korea feared the Security Council could take up the issue and try to refer alleged human rights violations to the International Criminal Court, replied:

"They know that without the full approval of Security Council, it cannot be done. They also know that some countries will exercise their vote, the veto. Not only China but also Russia."