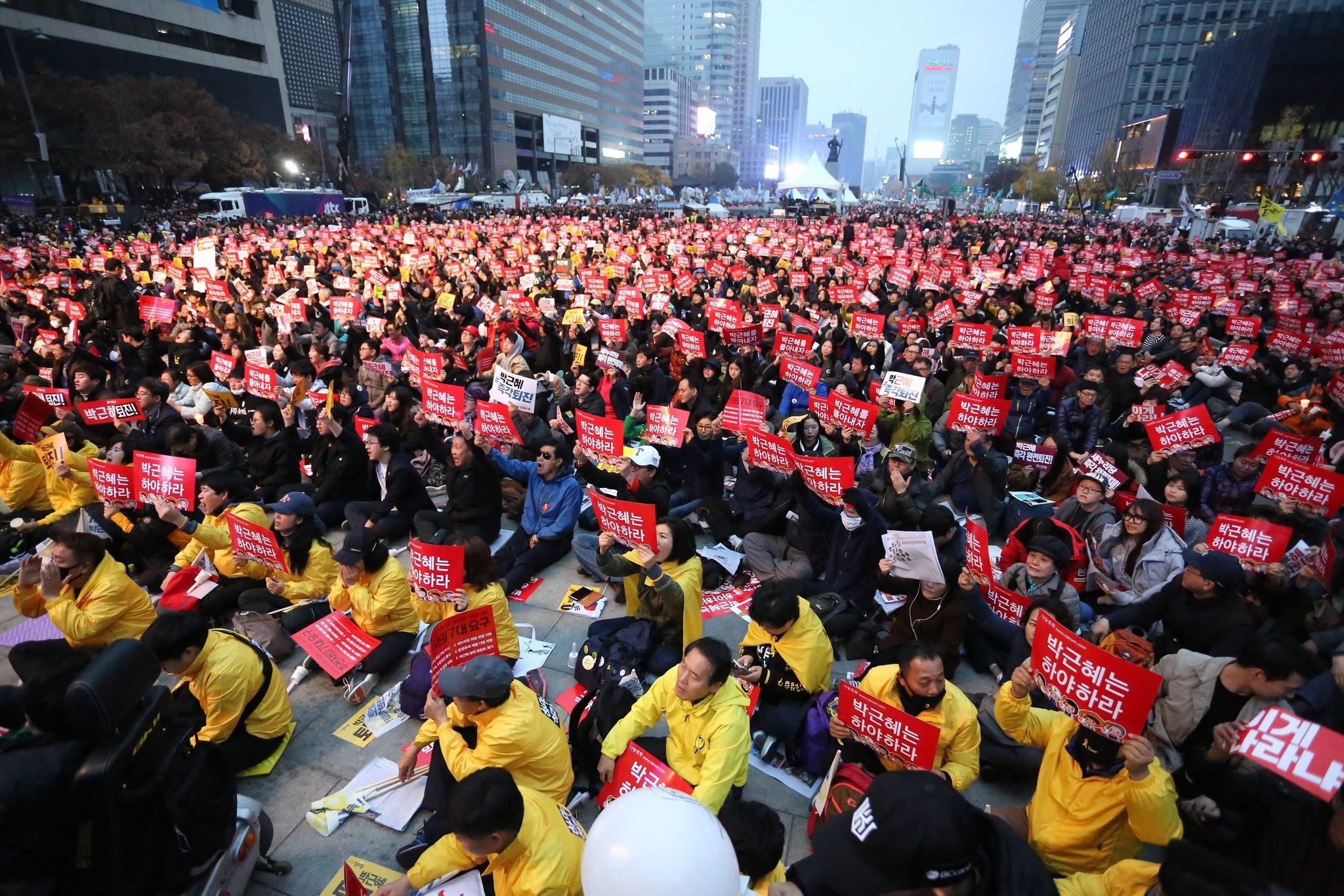 South Koreans shout slogans as they carry placards reading 'Park Geun-Hye Out' during a rally against South Korean President Park Geun-Hye on a main street in Seoul, 19 Nov. 2016. (EPA Photo)
by Nov 19, 2016 12:00 am

Hundreds of thousands of demonstrators took to the streets of Seoul on Saturday in the fourth straight weekend of protest against embattled President Park Geun-hye.

Park is resisting calls to step down amid an ongoing political crisis in which she is alleged to have let an old friend meddle in state affairs.

The scandal has rocked Park's presidency and united Koreans in disapproval, culminating in a protest last weekend that saw a million people march on Seoul by some estimates.

Saturday's protest was smaller as protest groups also organized demonstrations in regional capitals. Police said at least 155,000 people had packed into a central Seoul square early on Saturday evening for a candle-lit rally. Organizers said the number was 500,000.

Park has pledged to cooperate in an investigation into the scandal. Prosecutors are expected to bring indictments against Choi Soon-sil, Park's friend at the center of the crisis, and two former presidential aides tomorrow.

Not all Koreans are calling for the president to resign, however. A short drive away from the main protest, a group of conservative protesters gathered outside Seoul station in defense of the president.

"Sixteen million people elected this president to office. It does not make sense to simply ask for her withdrawal," said Geum Sang-chul, a 78-year-old pensioner and member of the Korean Veterans Association. Geum had joined a group of counter-protesters that police estimated at about 11,000-strong, while organizers said the number was higher.

"We can not give into the pro-North Korea supporters," said Geum, using a derogatory term that Korean conservatives have for the more progressive wing of Korean politics.

Park's approval ratings have been at a record-low 5 percent for the last three weeks because of the scandal over her friend.

Many of her remaining supporters, some of whom refer to themselves as "the five percent", are loyal to Park's father, Park Chung-hee, a military strongman who ruled South Korea for 18 years until he was assassinated by his spy chief in 1979.

Park Geun-hye's popularity and election as president stemmed in part from the symbolic connection to her father, who is still revered by older generations.

All hospitals in eastern Aleppo out of action: health directorate

"If they really care about the country, they should consider the country's image," said Lee Sang-soon, a 66-year-old pensioner. "I am troubled by how the country is portrayed abroad by these protests."

But Park remains highly unpopular across the country. Tens of thousands of people also gathered for dozens of demonstrations in regional cities on Saturday night, Yonhap news reported.