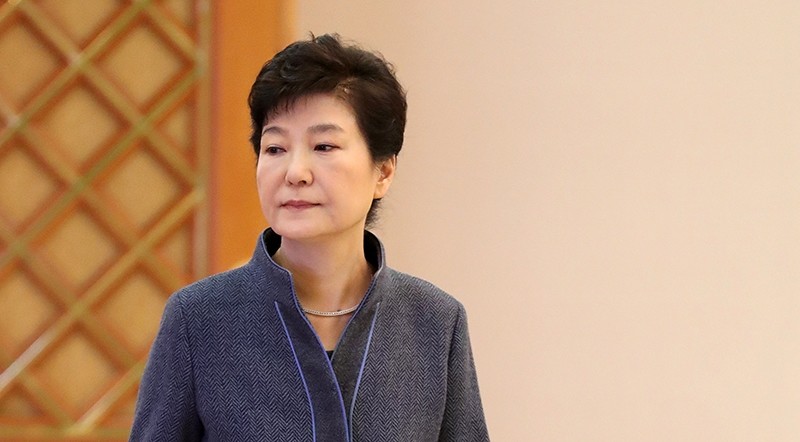 South Korean prosecutors are now formally treating President Park Geun-hye as a suspect in a snowballing corruption scandal that has dragged her approval rating down to a record-low five percent and prompted weeks of mass protests.

Park's status shifted Sunday when prosecutors publicly accused her for the first time of colluding with her confidante Choi Soon-sil and two former aides in a number of cases of alleged wrongdoing.

The announcement came as Choi and ex-senior secretaries An Chong-bum and Jeong Ho-seong were indicted for their suspected roles in crimes including forcing conglomerates to donate money for illicit gain and giving away state secrets.

"The prosecution's announcement of its investigation result is very regrettable," a presidential official was quoted as saying by Yonhap News Agency.

Certainly, the interim findings will have done little for Park's popularity a day after hundreds of thousands of protesters gathered in Seoul and cities nationwide to demand her resignation for a fourth consecutive weekend.

The president stands accused of being complicit in Choi and An's suspected efforts to draw business donations worth tens of millions of dollars.

Public anger has additionally been provoked by claims that Choi ensured preferential education treatment for her daughter and even wielded an undue influence over state affairs despite being a private citizen.

Park apologized late last month and again Nov. 4 for sending speech drafts to be checked by old acquaintance Choi, but she insisted that her motives for fundraising were "pure" and agreed to become the first sitting South Korean president to be questioned by prosecutors.

Political opponents accused her of putting off an interrogation last week, although Park's lawyer insists she will meet investigators in the coming days -- even though she is protected from criminal prosecution by her position.

The legal barrier to indicting the president herself has fueled opposition calls for her resignation, but there are signs they could seriously consider impeachment proceedings as the South Korean parliament moves ahead with an independent investigation to gather evidence.