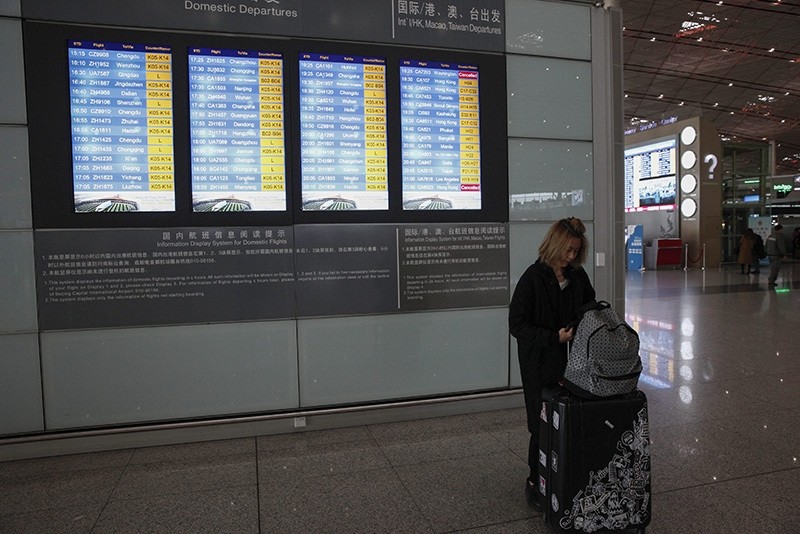 A woman attends to her luggage as flight details are posted on an electronic screen at the Beijing Capital International Airport in Beijing, China, Nov. 21, 2016. (EPA Photo)
by Dec 01, 2016 12:00 am

A Chinese pilot has been suspended, his airline said, after social media footage showed he told passengers to deplane and protest against a flight delay, the latest outburst over the country's notorious air transport services.

The flight, operated by Lucky Air, was scheduled to leave the tourist destination of Xishuangbanna for the southern city of Kunming at midnight on Monday.

Thirty minutes after the scheduled departure, the captain told passengers that a plane operated by a larger carrier had jumped the queue and caused the delay, according to a passenger who posted a video on China's Twitter-like Weibo.

"I am very angry. Please get off the plane. We won't depart for now. Let's put some pressure on the airport, go and vent for me," the passenger on the video quoted the pilot as saying.

Passengers got off and started yelling on the tarmac: "Explain the queue-jumping! A plane scheduled behind us took off first!"

China leads the world in flight delays, with the average flight delayed 21 minutes last year, according to the country's Civil Aviation Administration.

Much of the country's airspace is under military control, restricting availability for civilian flights.

Sometime later the Lucky Air pilot asked the passengers to return to the plane for take-off. "I hope you can cooperate and do me a favor," he said over the intercom. "Thank you very much. I am so sorry for holding you up until this late."

But some passengers refused to do as they were requested.

The plane finally departed around 3 a.m.

Lucky Air said in a statement that the pilot had been suspended, adding the delay was caused by a "misunderstanding during communication between the crew and the airport".

"The captain's misconduct wrongfully led some of the passengers onto the tarmac and caused the delay of the flight," the statement said.