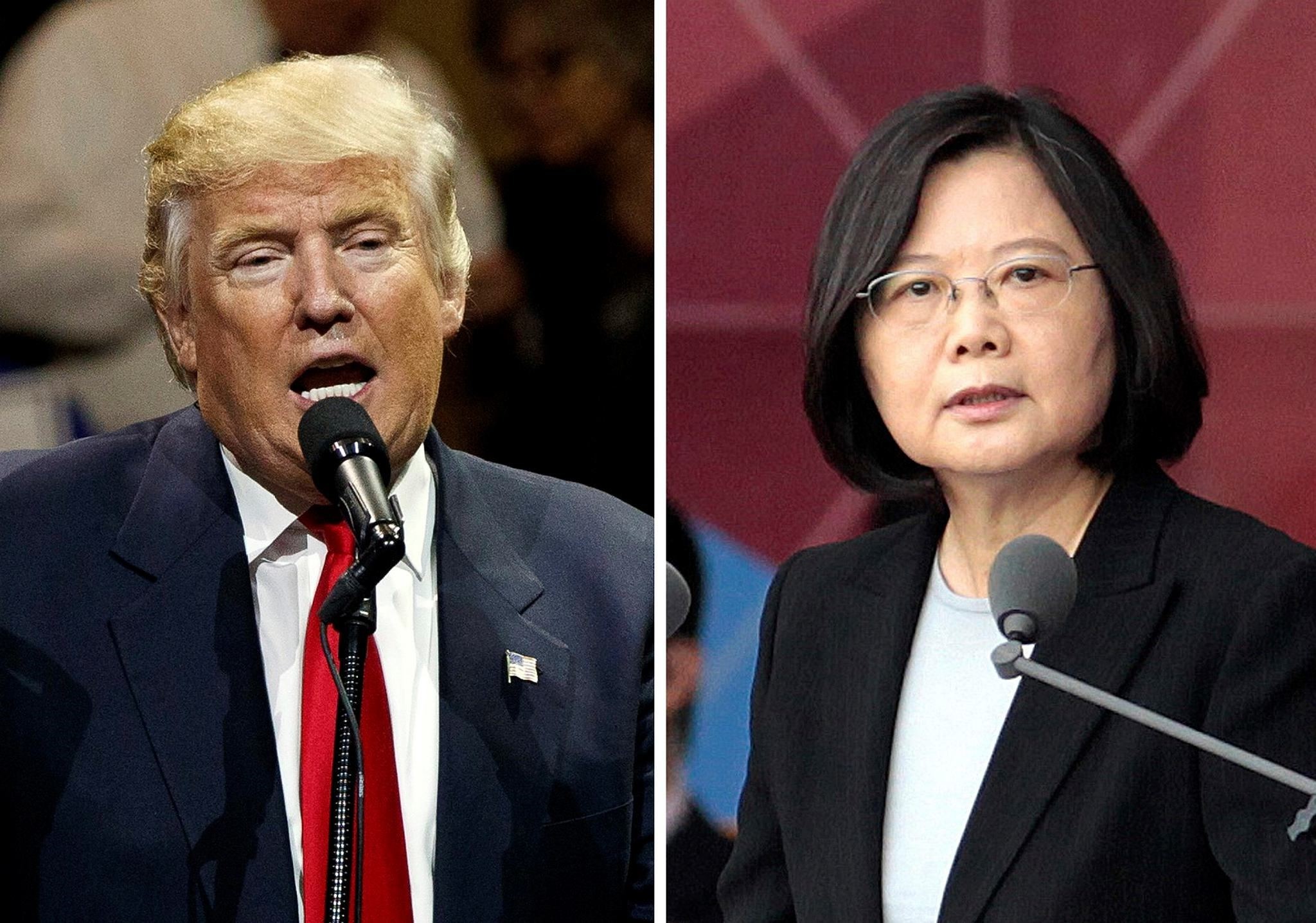 In a break with decades-long diplomatic tradition, President-elect Donald Trump spoke directly with the president of Taiwan, a move that drew an irritated response from China on Saturday and looked set to cast uncertainty over U.S. policy toward Asia.

It is perhaps unprecedented for a U.S. president or president-elect to speak directly with a leader of Taiwan, a self-governing island the U.S. broke diplomatic ties within 1979. China said it lodged a stern complaint with the U.S. and reiterated its commitment to seeking "reunification" with the self-governed democratic island, which it considers a renegade province.

In initial comments apparently meant to downplay the significance of the call, Chinese Foreign Minister Wang Yi said Saturday that the contact between Taiwanese President Tsai Ing-wen and Trump was "just a small trick by Taiwan" that he believed would not change U.S. policy toward China, according to Hong Kong's Phoenix TV.

"The one-China policy is the cornerstone of the healthy development of China-U.S. relations and we hope this political foundation will not be interfered with or damaged," Wang was quoted as saying.

Taiwan's official Central News Agency said Edwin Feulner, former president of the Heritage Foundation, a Washington-based conservative think tank, was a "crucial figure" in setting up communication channels between the sides, leading to the call. Feulner could not immediately be reached to comment on the report, which cited anonymous sources.

Feulner had met with Tsai in October when he led a delegation from the think tank on a trip to Taiwan, according to a release at the time from Taiwan's presidential office. That release says Tsai called Feulner a "longtime friend to Taiwan" and conveyed her gratitude to his foundation for its support.

Washington has pursued a so-called "one China" policy since 1979, when it shifted diplomatic recognition of China from the government in Taiwan to the communist government on the mainland. Under that policy, the U.S. recognizes Beijing as representing China but retains unofficial ties with Taiwan.

After the phone conversation, Trump tweeted that Tsai "CALLED ME." He also groused about the reaction to the call: "Interesting how the U.S. sells Taiwan billions of dollars of military equipment but I should not accept a congratulatory call."

The call also has drawn attention to Taiwanese media reports that the Trump Organization is interested in investing in the Taiwanese city of Taoyuan, near Taipei.

The city's mayor, Cheng Wen-tsan, said in a statement on the city government's website last month that a representative of the Trump Organization had visited the city and expressed interest in investing in hotels near the airport. The statement said the visit was too brief for both sides to get into details.

The Trump Organization has denied it has any projects planned in Taiwan.

The Taiwanese presidential office said Trump and Tsai discussed issues affecting Asia and the future of U.S. relations with Taiwan. "The (Taiwanese) president is looking forward to strengthening bilateral interactions and contacts as well as setting up closer cooperative relations," the statement said.

Tsai also told Trump that she hoped the U.S. would support Taiwan in its participation in international affairs, the office said, in an apparent reference to China's efforts to isolate Taiwan from global institutions such as the United Nations.

Taiwan's presidential office spokesman Alex Huang said separately that Taiwan's relations with China and "healthy" Taiwan-U.S. relations can proceed in parallel. "There is no conflict (in that)," he told reporters in Taipei.

"It must be pointed out that there is only one China in the world and Taiwan is an inseparable part of Chinese territory," Geng Shuang, a ministry spokesman, said in a statement. "The government of the People's Republic of China is the sole legitimate government representing China."

The call is the starkest example yet of how Trump has flouted diplomatic conventions since he won the Nov. 8 election. He has apparently undertaken calls with foreign leaders without guidance customarily lent by the State Department, which oversees U.S. diplomacy.

"President-elect Trump is just shooting from the hip, trying to take phone calls of congratulatory messages from leaders around the world without consideration for the implications," said Bonnie Glaser, senior adviser for Asia at the Center for Strategic and International Studies in Washington.

China is likely to be trying to identify whether this signals any intent on the part of Trump to alter long-standing U.S. policy toward Taiwan, Glaser said.

"They will hope that this is a misstep, but I think privately, they will definitely seek to educate this incoming president and ensure that he understands the sensitivity of Taiwan," she said.

Last month, Trump had a call with Chinese President Xi Jinping during which Trump's office described him as saying he believed the two would have "one of the strongest relationships for both countries."

Tsai was elected in January and took office in May. The traditional independence-leaning policies of her party have strained relations with Beijing.

The call with Trump could "convince people in Taiwan that the island can establish good relations with the U.S. and encourage (Tsai) to continue to resist pressure from Beijing," Shi said.

Over the decades, the status of Taiwan has been one of the most sensitive issues in U.S.-China relations. China regards Taiwan as part of its territory to be retaken by force, if necessary, if it seeks independence. It would regard any recognition of a Taiwanese leader as a head of state as unacceptable.

Taiwan split from the Chinese mainland amid civil war in 1949. The U.S. policy acknowledges the Chinese view over sovereignty, but considers Taiwan's status as unsettled. The U.S. has legal commitments to help Taiwan maintain the ability to defend itself.

Ned Price, a spokesman for the White House National Security Council, said Trump's conversation does not signal any change to long-standing U.S. policy on cross-strait issues.

In Beijing, a U.S. business group urged the new U.S. administration to respect the status quo.

"The new administration needs to get up to speed quickly on the historical tensions and complex dynamics of the region," said James Zimmerman, chairman of the American Chamber of Commerce in China.