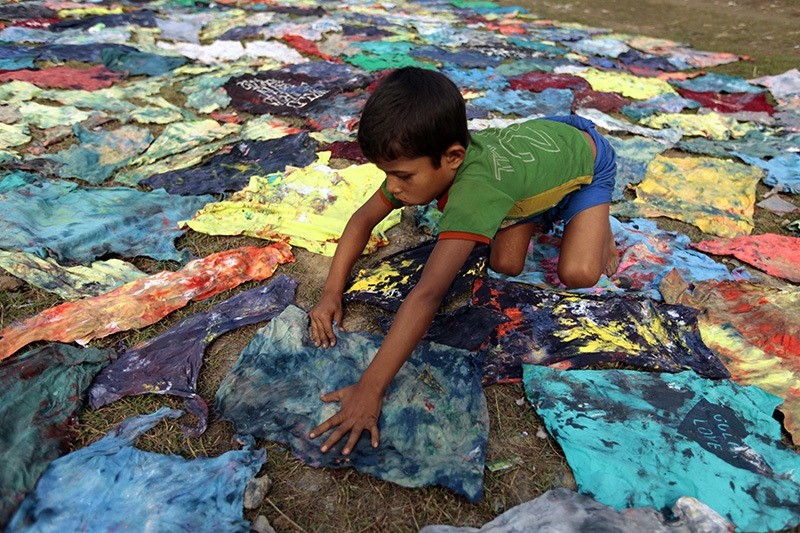 In this Dec. 22, 2012 file photo, a Bangladeshi child works at a clothes-dyeing factory in Narayanganj, outskirts of Dhaka, Bangladesh (AP Photo)
by Associated Press Dec 07, 2016 12:00 am

Thousands of Bangladeshi children who live in the capital's slums are working illegally for an average of 64 hours a week, with many employed by the garment industry making clothing for top global brands, according to a report released Wednesday.

The report by the London-based Overseas Development Institute found that 15 percent of children aged 6-14 were not attending school so they could work full time.

At the age of 10, about 8 percent of slum-dwelling children had jobs, the report said. By the time they reached 14, almost half were already working.

The report was based on a survey of 2,700 slum households in Dhaka, the capital.

Authorities did not immediately respond for requests for comment.

In Bangladesh, it is illegal for children under 14 to work. It is also illegal to ask anyone to do "hazardous work" for more than 42 hours a week.

But child labor persists, as some factories do not require ID cards from their workers or do not understand that employing children is against the law.

Children would like to go to school, the report's co-author Maria Quattri said in a statement, "but poverty was driving parents to find jobs for their children, even though they could see that it would jeopardize their long-term future."

Bangladesh's garment industry, the world's second largest after China, provides an economic lifeline for the impoverished country, accounting for some $25 billion in annual exports.

It also employs around 4 million workers, most of them women. Industry insiders say factories struggle to keep employees from moving to jobs elsewhere.

But child labor is not confined to Dhaka's slums. Crushing poverty leads children across Bangladesh to take jobs to help their families.

Out of an estimated 4.7 million child laborers nationwide, the vast majority live in rural areas, working on farms or in homes as domestic servants, according to government statistics and UNICEF.