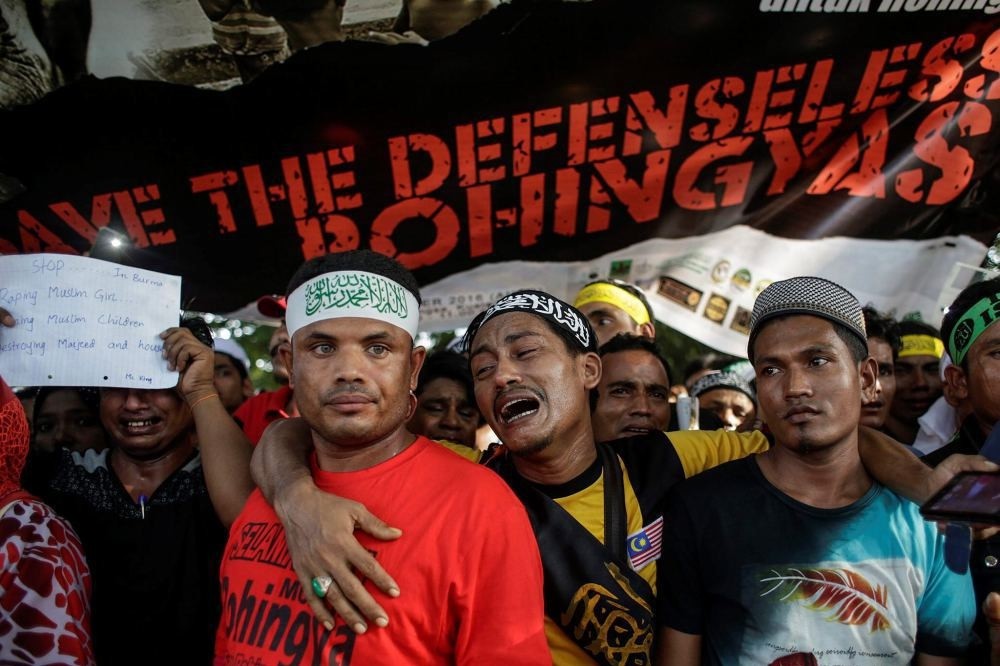 Rohingya Muslims react during a protest condemning Myanmaru2019s government violence on Rohingya people in Rakhine State, in Kuala Lumpur, Malaysia, Dec. 4.
by Dec 08, 2016 12:00 am
Myanmar has stopped workers going to Malaysia after Malaysia's leader criticized its treatment of Muslims, while Indonesia joined a growing chorus of concern about the fate of Myanmar's stateless Rohingya Muslims.

Violence in Myanmar's Rakhine State, home to many Rohingyas, has become the biggest challenge facing Aung San Suu Kyi's eight-month-old government and has sparked international criticism that the Nobel Peace Prize winner has done too little to help the Muslim minority.

At least 86 people have been killed and about 30,000 displaced in a Myanmar army crackdown in Rakhine State, launched after attacks on police posts near the Bangladesh border on Oct. 9 in which nine policemen were killed.

The prime minister of mostly Muslim Malaysia, Najib Razak, on the weekend described the violence as "genocide" and called for foreign intervention.

Myanmar on Tuesday summoned Malaysia's ambassador over what it described as Najib's "unverified and unsubstantiated allegations".

The deputy permanent secretary of Myanmar's Labor Ministry, Maung Maung Kyaw, said Myanmar workers had been temporarily stopped form going to Malaysia because of security worries. He declined to comment when asked if the ban was in response to Najib's criticism, saying only it was "because of the ongoing situation".

Labor-short Malaysia hosts about 147,000 Myanmar migrant workers, according to latest data available from Myanmar. A "sizeable number" of undocumented workers from Myanmar are also in Malaysia, Myanmar officials say.

Buddhist-majority Myanmar has long discriminated against the stateless Rohingya and the recent crisis has galvanized protests in Muslim countries around the region, including Malaysia. Indonesia's foreign minister Retno Marsudi said on Wednesday she had expressed her concern to Aung San Suu Kyi over the treatment of Rohingya Muslims.

Myanmar authorities have rejected accusations from residents and rights groups that soldiers have raped Rohingya women, burnt homes and killed civilians during the latest crackdown.

Ethnic Rakhine Buddhists and the Rohingya Muslims have lived separately in Rakhine State since clashes in 2012 in which more than 100 people were killed. There are more than 135,000 Myanmar refugees living in Malaysia, including about 55,000 Rohingyas, according to the U.N. refugee agency UNHCR.