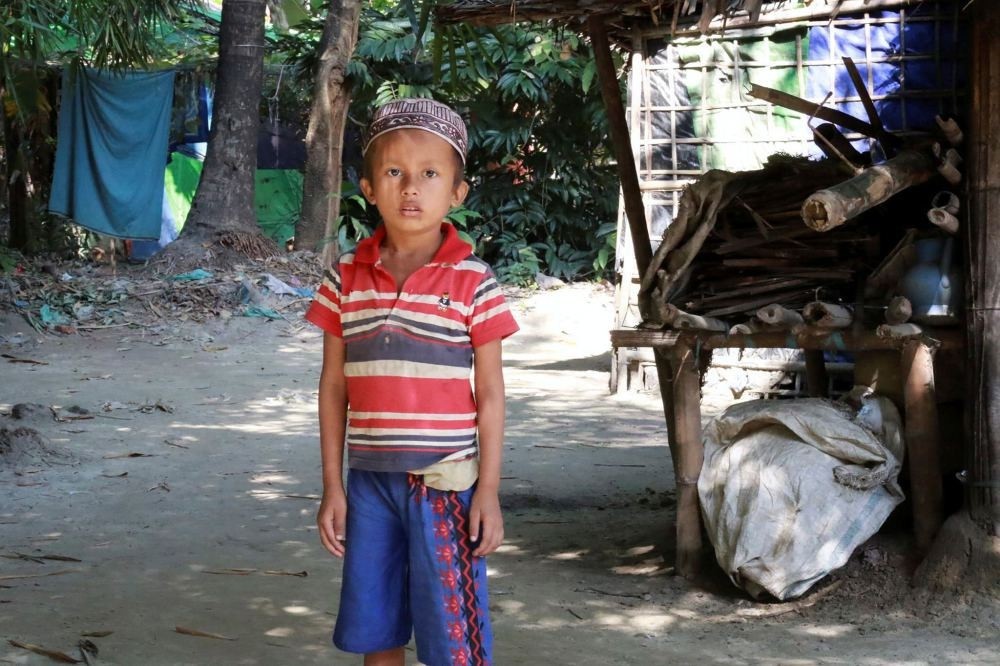 A Muslim boy stands in front of a house in Maungdaw, a town located in Myanmar's strife-torn Rakhine State near the Bangladesh border on Dec. 2.
by Compiled from Wire Services Dec 15, 2016 12:00 am

Myanmar's military burned down at least 1,500 houses belonging to the Rohingya minority in the conflict-torn Rakhine State, driving thousands of ethnic Rohingya from their homes, Human Rights Watch reports

An international rights group claimed that new satellite imagery and interviews with refugees show the military was responsible for the mass destruction of Rohingya villages in a conflict-torn area near Myanmar's border with Bangladesh.

Myanmar's government has claimed that villagers burned down their own homes to evoke international sympathy, prior to troops entering in search of people suspected of attacking police outposts, and stolen weapons.

New York-based Human Rights Watch (HRW) said in a statement Tuesday that at least 1,500 buildings have been destroyed by soldiers in the Maungdaw district of Rakhine State during military operations following the Oct. 9. attacks in which nine police officers were killed.

"The new findings refute the Burmese military and government's claims that Rohingya militants were responsible for burning down their own villages," said Brad Adams, Asia director at Human Rights Watch. "The satellite imagery and eyewitness interviews clearly point the finger at the military for setting these buildings ablaze."

It underlined that images and interviews "firmly" place responsibility for the torching with the military. It added that the government's denial that the military are using arson as a tactic lacked credibility. "Government officials have been caught out by this satellite imagery, and it's time they recognize their continued denials lack credibility," said Adams.

At least 94 people, 17 soldiers and 76 alleged "attackers" (including six who reportedly died during interrogation) have been killed while some 575 suspects have been detained in military operations since Oct. 9.

Rohingya advocacy groups however claim around 400 Rohingya described by the United Nations as among the most persecuted groups worldwide, were subsequently killed in the military operations in the north of the Rakhine.

The violence, the burning of Rohingya property and alleged rapes have sparked international criticism of both Myanmar's military and Suu Kyi's National League for Democracy government.

In response to growing international and regional concerns, the government last week established a commission led by Vice-President Myint Swe, a former military general to investigate the attacks and allegations against the military.

With the area presently under military curfew, and access to the region blocked to aid agencies and independent journalists, HRW has called for the United Nations to assist in the probe as it says the commission's composition and mandate raise serious doubts that it will conduct a thorough and impartial investigation. "Blocking access and an impartial examination of the situation will not help people who are now at grave risk," it underlined.

The vice-president-led commission will submit its findings and suggestions by the beginning of February to the president's office. The commission is a separate entity to the Advisory Commission on Rakhine, which is headed by former U.N. Secretary-General Kofi Annan and was set up to advise the government on resolving conflicts in the state. The Rohingyas are being subjected to abuses of their fundamental rights. Myanmar's Nationality Law, approved in 1982, denies Rohingya citizenship and, according to the law, foreigners cannot become naturalized citizens of Myanmar unless they can prove a close familial connection to the country.

Rohingyas are not recognized among the 134 official ethnicities in Myanmar because authorities see them as illegal immigrants from neighboring Bangladesh. They are subjected to forced labor, have no landownership rights and are heavily restricted by the government. They are denied the permission to leave the camps that were built for them, have no source of income and have to rely on the World Food Program to survive. The U.N. considers Rohingyas to be one of the most persecuted minorities in the world.

Since 2012, the unrest in Myanmar has cost many Rohingyas their lives. Roughly 140,000 Rohingyas who are stateless have been placed into camps for internally displaced people due to the increasing violence they face, the U.N. High Commissioner for Refugees (UNHCR) said. The Rohingyas are a Muslim ethnic group living mainly in Myanmar who are believed to have descended from Muslim traders who settled in Myanmar more than 1,000 years ago. As of 2016, approximately 1.3 million Rohingyas live in Myanmar and about 300,000 to 500,000 live in Bangladesh.
Last Update: Dec 15, 2016 1:36 am
RELATED TOPICS