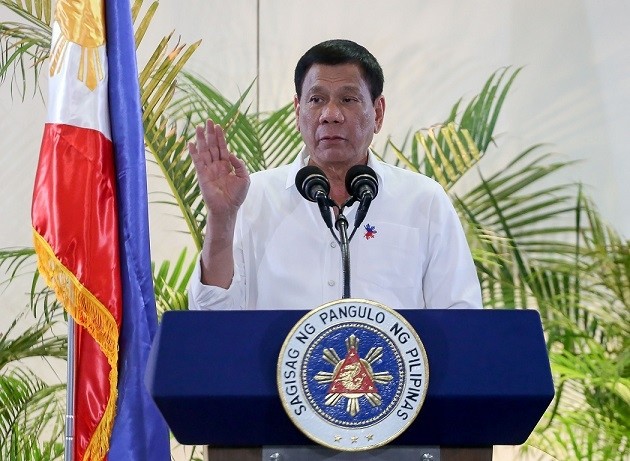 President Rodrigo Duterte threatened Saturday to abrogate an agreement that allows United States troops to visit the Philippines after a U.S. agency deferred a decision on an aid package citing concerns over the rule of law in the Southeast Asian country.

"Bye-bye America, and work on the protocols that would eventually move you out from the Philippines," he was quoted by local media as saying after returning from a trip to Cambodia and Singapore.

"You know, America, you might also be put on notice. Prepare to leave the Philippines. Prepare for the eventual repeal or the abrogation of the Visiting Forces Agreement [VFA]," he added.

On Thursday, the Millennium Challenge Corporation (MCC) Board released a statement saying that a vote on the latest grant of aid to the Philippines was deferred "subject to a further review of concerns around rule of law and civil liberties".

The move came at a time when rights groups, the United Nations and the U.S. have expressed concern over alleged extrajudicial killings under Duterte's campaign against illegal drugs, which has seen the death of thousands of suspects since July.

Since winning the May 9 election, Duterte has declared that his administration would pursue an independent foreign policy and repeatedly called for U.S. troops to be withdrawn from the country.

The VFA allows the U.S. to station around a hundred troops in the southern region of Mindanao to help fight militants, and to retain custody of accused personnel during judicial proceedings.

Duterte declared Saturday that he was putting the U.S. "on notice" that he would "decide any day soon" on what to do with the VFA.

He added that he would base his decision on the incoming administration of U.S. President-elect Donald Trump, who expressed support for Duterte's anti-drug drive during a phone conversation earlier this month.

"In deference, I'll just wait. I will let [U.S. President Barack] Obama fade away. If he disappears, then I will begin to reassess," Duterte underlined.

Saying that the Philippines Supreme Court had characterized the VFA as an executive agreement rather than a treaty, Duterte added, "tit for tat... it ain't a one way street."

Duterte had previously also called for the scrapping of the Enhanced Defense Cooperation Agreement -- which was signed in 2014, ratified by the Philippines Congress in July, and allows U.S. military forces to operate from five bases in the Philippines.

It announced last year that the Philippines was unanimously re-selected to receive a second grant.

On Friday, Philippine Foreign Affairs Secretary Perfecto Yasay Jr. criticized the deferment saying that the U.S. started mentioning the possible withholding of aid after Duterte took office and declared he would pursue an independent foreign policy.

During the Singapore visit, Yasay told reporters that need-based aid should come "without any conditions" and called on the U.S. to treat the Philippines "with mutual respect and treat us as a sovereign equal".

GMA quoted him as saying, "if we will be given this assistance under the Millennium Challenge Corporation, we first have to bow down to the impositions of conditions that they are making and this is something that we feel is not conducive to strengthening our relationship with friends, especially traditional allies, especially close friends."