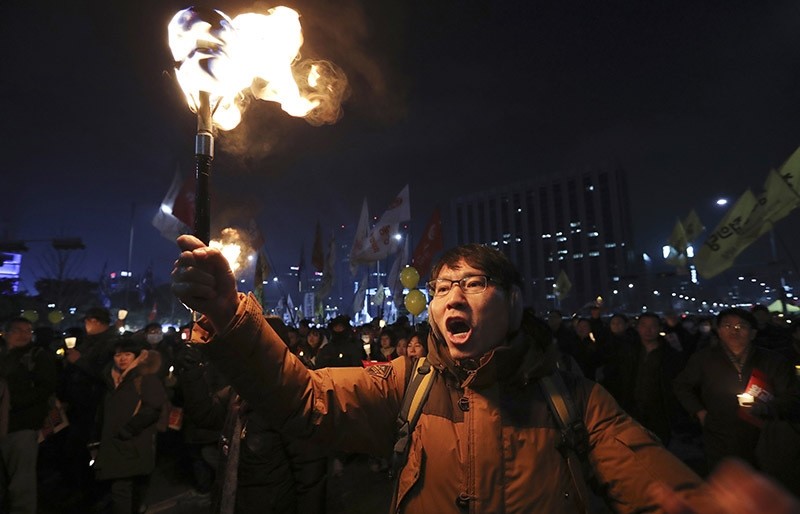 A protester carries a torch with other protesters after a rally against the impeached South Korean President Park Geun-hye in downtown Seoul, South Korea, Saturday, Dec. 17, 2016. (AP Photo)
by Associated Press Dec 17, 2016 12:00 am

The historically large weekend protests over an explosive corruption scandal pushed South Korea's opposition-controlled parliament to vote this month to impeach Park. The impeachment suspended Park's powers until the Constitutional Court decides whether she should permanently step down or be reinstated.

While polls measure Park's popularity in the low single digits, her impeachment has become a rallying point for her conservative supporters, who turned out in the tens of thousands on Saturday.

They waved the country's national flag and shouted for Park's "illegal" impeachment to be "nullified," and the "rotten" parliament to be dissolved.

Despite thick lines of police officers separating them, there was some yelling and shoving between the two groups, with one Park supporter hitting an anti-Park protester with the pole of her flag. There were no immediate reports of serious violence or injuries.

Huge throngs of anti-Park protesters later walked toward the presidential offices and residence, known as the Blue House, carrying candles and signs and demanding that Park immediately quit.

Other groups marched toward the office of Prime Minister Hwang Kyo-ahn, who assumed the role as government caretaker after Park was impeached on Dec. 9, and toward the Constitutional Court.

"I can't stand Park for even another day. Nobody wants her, but she's stubbornly sticking around, using taxpayer money like it's her money," said Kim Eun-young, who participated in her third weekend protest.

Prosecutors accuse Park of colluding with a longtime confidante to extort money and favors from companies and allowing her to manipulate state affairs.

The court has up to six months to decide on Park's case. If she is formally removed from office, the country will hold a presidential election within 60 days.

Park has apologized for putting trust into her jailed friend, Choi Soon-sil, whose criminal trial begins on Monday, but has denied any legal wrongdoing.

On Friday, lawmakers attempted to inspect records at the president's office, but were denied entry. The lawmakers had planned to look into allegations that Blue House security officials allowed Choi and her key associates to easily move in and out of the presidential offices and residence.

Park's lawyer, Lee Joong-hwan, said the court should restore Park's powers because there is insufficient evidence to justify her unseating. He and other members of Park's legal team submitted a statement to the court explaining why the case should be decided in the president's favor.