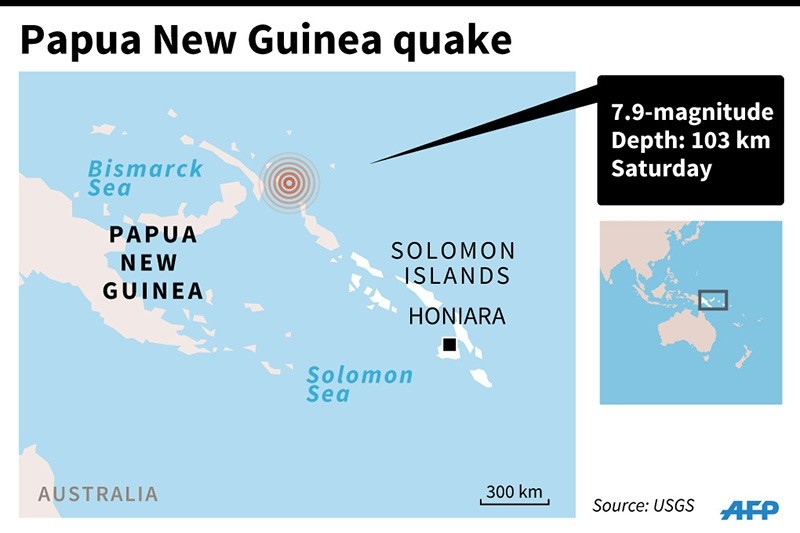 Tsunami warnings were issued for several nations on Saturday after a major 7.9-magnitude earthquake struck off Papua New Guinea, the Pacific Tsunami Warning Centre and the U.S. Geological Survey said.

The quake was originally recorded at 8.0 before being revised down to 7.9.

"Overall, the population in this region resides in structures that are vulnerable to earthquake shaking...some casualties and damage are possible," the USGS said on its website as it issued a yellow alert for shaking-related fatalities and losses.

But Geoscience Australia seismologist Dan Jaksa downplayed the severity of the quake, noting its depth made the likelihood of a tsunami "low".

"This region of PNG is also pretty remote and very, very sparsely populated," he added.

"There would definitely have been shaking, in fact we logged it as shaking felt as much as 3,400 kilometres away, which would include population centres like Rabaul (on Papua New Guinea's New Britain island).

"But it was far enough away for the shaking to not be strong."

New Zealand's Ministry of Civil Defence briefly issued a tsunami warning for all of the country's coast but cancelled the alert after analysing additional data.

Earthquakes are common near Papua New Guinea, which lies on the 4,000-kilometre-long Pacific Australia plate, which forms part of the "Ring of Fire", a hotspot for seismic activity due to friction between tectonic plates.

In 2013 the neighbouring Solomon Islands were hit by a devastating tsunami after an 8.0-magnitude earthquake rattled the region. That tsunami left at least 10 people dead, destroyed hundreds of homes and left thousands of people homeless.