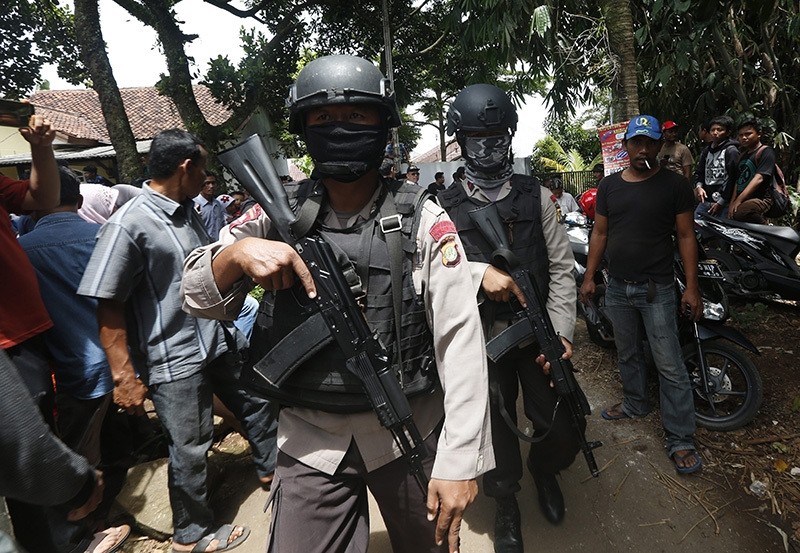 Indonesian police said three suspected terrorists who were planning a holiday season suicide bombing were killed in a raid Wednesday on the outskirts of Jakarta in the second imminent attack to be foiled in less than two weeks.

A residential neighborhood has been evacuated after several bombs were found in a house used by the men. Jakarta police chief Mochamad Iriawan said explosive experts had defused two bombs and were still in the house.

The men planned to stage their attack on Christmas Day or New Year's Eve, Iriawan said in a televised interview from the neighborhood. They were to stab police officers in order to attract a crowd and then detonate bombs, he said.

The three men were killed in a gun battle with the police's anti-terror squad after refusing an appeal from authorities to surrender and come out of the house in a leafy residential compound in Tangerang, a Jakarta satellite city.

National Police spokesman Rikwanto said the men threw explosives and fired guns at police. A fourth man, who was arrested in the neighborhood, had led police to the house used by the terrorists.

"Every year, Christmas and New Year's events are the target of terrorists to carry out amaliyah," Rikwanto told a press conference, using an Arabic term that's a byword for suicide bombing in militant circles.

Indonesia, the world's most populous Muslim nation, has carried out a sustained crackdown on terrorists since the Bali bombings that killed 202 people. But a new threat has emerged in the past several years from militants who have switched allegiance to the Daesh terrorists group and from new recruits. An attack in the capital Jakarta in January by Daesh sympathizers killed eight people, including the attackers.

Police said the holiday season plot was uncovered during the interrogation of militants arrested Dec. 10 on the outskirts of Jakarta who were planning a suicide bomb attack on a guard-changing ceremony at the presidential palace the next day.

Police have said that foiled plot, in which a woman was to be the suicide bomber, was orchestrated by Bahrun Naim, an Indonesian with the Daesh group in Syria. They also say Naim was behind a bomb lab that was raided last month in West Java and contained enough explosive materials to make bombs three times more powerful than those used in the 2002 Bali bombings.

The Australian government's advice to travelers, updated Wednesday, said the terrorist threat level in Indonesia remains high. It notes that authorities have arrested people who were allegedly in the advanced states of attack planning.

Awi Setiyono, a police spokesman, said that one of the slain militants, who he named as Omen, was a convicted murderer who was radicalized in prison by a militant who had plotted an attack against the Myanmar embassy in Jakarta in 2013.

The two other slain men were members of Jemaah Anshorut Daulah, a terrorist group led by Aman Abdurrahman.