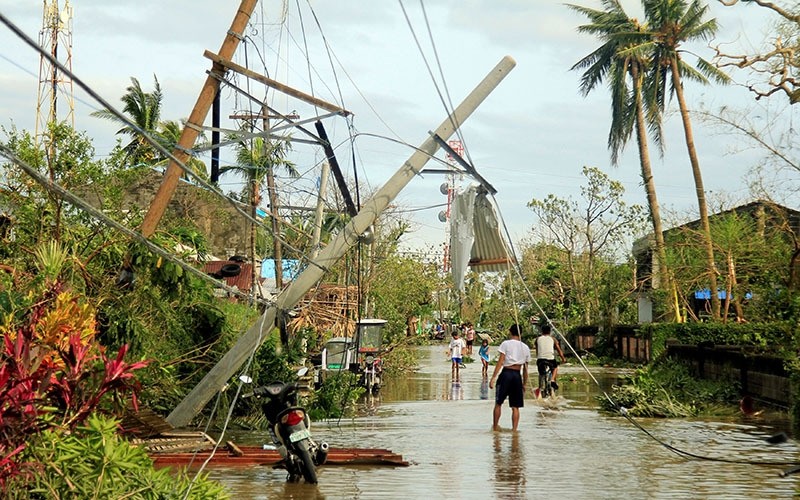 At least six people were killed and more than 380,000 were evacuated, officials said Monday, as Typhoon Nock-Ten brought howling winds and heavy rains to the Philippines.

The typhoon that hit the Philippines on Christmas day and the day after leaves trees toppled, houses destroyed and crops damaged. More than 300 flights were delayed or re-scheduled and ferries were barred from sailing, stranding more than 12,000 holiday travelers.

Six people died from drowning or by being pinned by fallen trees, poles and a collapsed concrete wall in the provinces of Quezon and Albay, southeast of Manila, after the typhoon made landfall in Catanduanes province Sunday night, officials said.

The military reported that two of its camps were totally destroyed and several outposts were damaged in two affected provinces.

After weakening on landfall, the typhoon had sustained winds of up to 120 kilometers (74 miles) per hour and gusts of 180 kph (111 mph) when it blew into the South China Sea after battering the congested provinces of Batangas and Cavite, south of Manila, government forecasters said.

A cargo ship with about two dozen crewmen radioed for help as their vessel started to list off Batangas. It later ran aground and turned on its sided in Mabini town, the coast guard said.

As of Monday morning there were 383,097 people in evacuation centres, the National Disaster Risk Reduction and Management Council said.

The storm was one of the strongest to hit the Philippines since Typhoon Haiyan left more than 7,300 people dead or missing and displaced over 5 million in 2014. But officials in some provinces found it difficult to convince people to abandon their Christmas celebrations and head for the shelters before the storm hit. Some officials said they had to impose forced evacuations.

About 20 typhoons and storms lash the Philippines each year. In the past 65 years, seven typhoons have struck the country on Christmas Day, according to the government's weather agency.