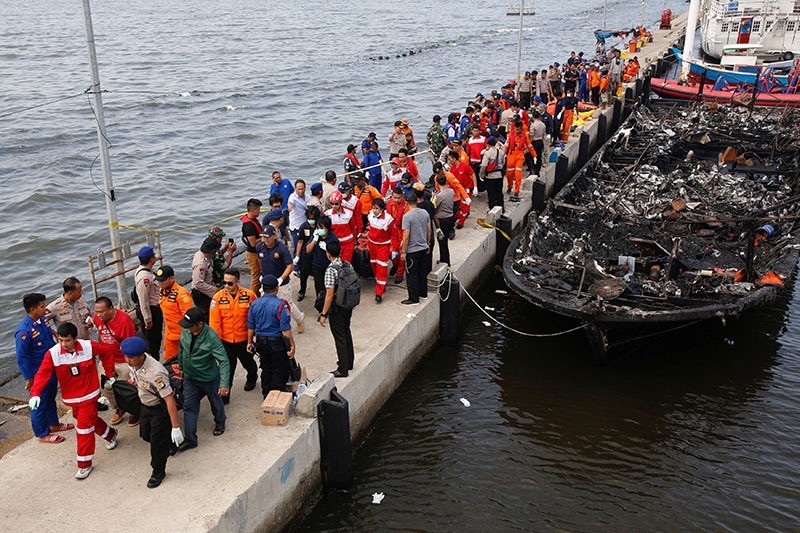 Security forces, Red Cross and rescue workers carry body bags with the remains of victims after a fire ripped through a boat carrying tourists. (Reuters Photo)
by Anadolu Agency Jan 01, 2017 12:00 am

At least 23 people have been confirmed dead after a fire broke out on a large boat carrying tourists to islands north of the Indonesian capital, while 17 others remain missing and more than 200 have been rescued.

A National Disaster Management Agency spokesman said Sunday afternoon that three of the fatalities had earlier been taken to a nearby hospital, while "20 dead victims were found inside the Zahro Express ship after the boat was transported to the Muara Angke port" in Jakarta.

Sutopo Purwo Nugroho said in a statement that there were around 210 survivors -- 17 of who sustained injuries -- but 17 people remained missing.

He had earlier told Anadolu Agency that the tourist ship departed from Jakarta in the morning en route to Tidung Island in Thousand Islands Regency.

The head of North Jakarta's fire department, Satriadi Gunawan, said his officers received a report on the incident at 08.46 a.m. (0146GMT) and immediately dispatched teams to the site.

The flames engulfing the ship were reportedly later extinguished and the vessel brought to the Muara Angke port in Jakarta.

Three crew members were taken to a local police station for questioning.

According to Gunawan, the fire may have been caused by an electrical short circuit but an investigation remains ongoing.

"The point of the fire comes from the front section of the bottom of the boat, and then spreads to the back," he said.

He also accused the captain of jumping overboard and leaving behind the passengers when the fire broke out.

The head of the Jakarta Transportation Department said the body would investigate an apparent discrepancy between the number of passengers listed on the manifest and those on board the boat at the time of the accident.

"It may be an inaccurate passenger manifest," Andriansyah -- who like many Indonesians uses one name -- said, adding that the vessel only had a capacity of 259 passengers.

Sailing permits issued by the harbormaster, however, show the vessel was registered as carrying 100 people.

Indonesia's waterways serve as a widespread form of transportation in some areas of the archipelago, where accidents resulting from overcrowded boats and lax safety standards are common.