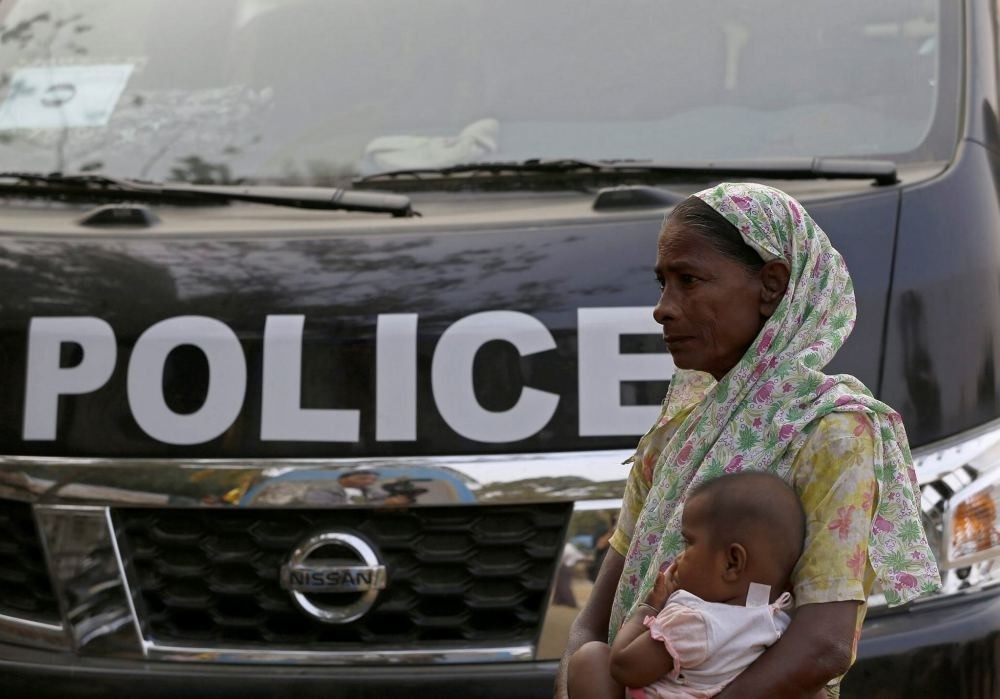 A Muslim woman carries her child as she stands near a police vehicle at the NgaKhuYa village near the Maungdaw town of Bangladesh-Myanmar border, Rakhine State, western Myanmar.
by Compiled from Wire Services Jan 03, 2017 12:00 am

The Myanmar government pledged to investigate human rights abuses committed by security forces against the Muslim Rohingya minority who have long been subjected to violence including rape, killings and the burning of more than 1,000 homes

Myanmar authorities opened an investigation into the abuse of Rohingya Muslims by security forces after a video showing police officers beating and kicking villagers went viral over the weekend, state media reported Monday.

The selfie-style film was shot by a member of the border guard police on November 5 during "clearance operations" in Kotankauk village, northern Rakhine state, the state counsellor's office said in a press release cited in state media.

Three officers responsible for beating villagers were identified and more were under investigation, the press release said.

"Now, according to the initial reports, three police officers were detained," Zaw Htay, chief government spokesperson, told dpa. "We have rules and regulations for police ... They will be punished according to that police law."

Myanmar security forces have been accused of extreme violence during security sweeps of villages throughout northern Rakhine, near the country's western border, following deadly attacks on police in October. Thousands of Rohingya have since fled across the border into Bangladesh.

Buddhist-majority Myanmar has long discriminated against the stateless Rohingya, who rights groups say are among the most persecuted peoples in the world.

More than 120,000 have been trapped in squalid displacement camps since violence erupted in 2012 in Rakhine, where they are denied citizenship, access to healthcare and education.

"We are frustrated that she has not taken any initiative to ensure full and equal citizenship rights of the Rohingyas," the group wrote.

Under Myanmar's junta-era constitution Suu Kyi's civilian administration has limited power over the army, which maintains control of the defense, home and border ministries.

Rohingyas are not recognized among the 134 official ethnicities in Myanmar because authorities see them as illegal immigrants from neighboring Bangladesh. They are subjected to forced labor, have no land rights and are heavily restricted by the government. They have no permission to leave the camps built for them, have no source of income and have to rely on the World Food Program to survive. The Rohingyas are a Muslim ethnic group living mainly in Myanmar. Rohingyas are thought to be descended from Muslim traders who settled there more than 1,000 years ago. As of 2016, approximately 1.3 million Rohingyas live in Myanmar, and about 300,000 to 500,000 live in Bangladesh.
Last Update: Jan 03, 2017 1:14 am
RELATED TOPICS