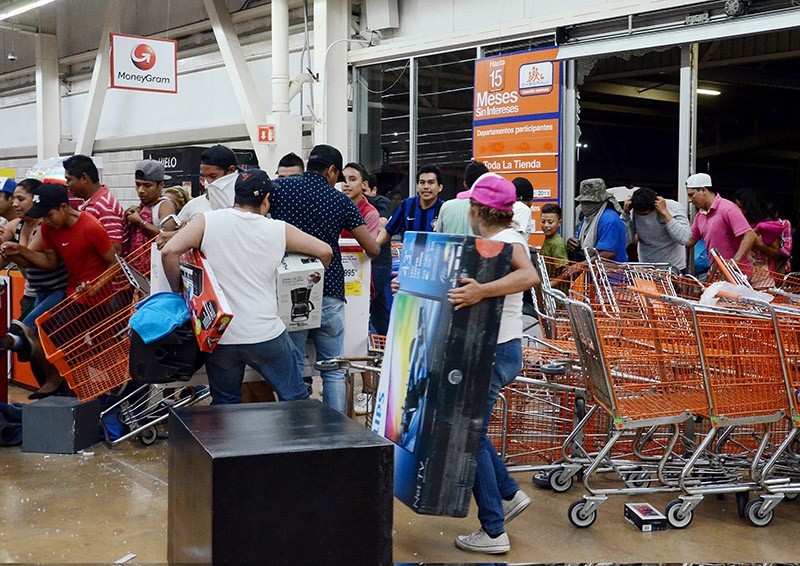 Protests over a sharp gasoline price hike erupted into looting of gas stations and stores in various parts of Mexico on Wednesday, with dozens of businesses reportedly sacked.

The National Association of Self-Service and Department Stores of Mexico said in a statement that 79 stores had been looted and 170 were closed or blockaded in central Mexico, including the capital.

The unrest "resulting in the theft of merchandise put at risk the lives of clients and workers in the stores, primarily in Mexico State, Michoacan, Hidalgo and Mexico City," the statement said.

In the Gulf coast city of Veracruz, 50 establishments including convenience stores, supermarkets and big-box outlets suffered looting, according to a preliminary count by the local chamber of commerce.

Extra police patrols were deployed, and at least 14 people were detained, the state government reported. At one supermarket officers fired into the air to disperse the multitudes.

Earlier in the day, President Enrique Pena Nieto took to the airwaves to defend his unpopular gasoline deregulation measure that resulted in price hikes of up to 20 percent over the weekend.

The increases took effect as the government ends regulated prices for gasoline and diesel, which it says represented subsidies that unduly benefited wealthier Mexicans.

The change boosted the average price for a liter of premium gasoline to 17.79 pesos (about 90 cents). That makes 4 liters, or about a gallon, equal to nearly as much as Mexico's just raised minimum wage for a day's work — 80 pesos (about $4).

Pena Nieto said he would try to help groups hit hard by the increases, in an apparent reference to bus, truck and taxi drivers.

"I understand the anger and irritation felt by the general public," Pena Nieto said, saying that "this is an action that nobody would want to take."

"If this decision had not been taken, the effects and consequences would have been far more painful," he added.

The farm activist group El Barzon said that even with tax breaks or government support for truck drivers, "the wave of anger and discontent among Mexicans cannot be held back."

The state-owned oil company Pemex said Tuesday that blockades of fuel terminals in the states of Chihuahua, Morelos and Durango had caused a "critical situation" in distributing fuel to gas stations there.

It said that if the blockades continued, it could interrupt operations at airports in Chihuahua and Baja California.

The country's industrial chamber, known as Concamin, said that "impeding production and commerce is not the best way to handle the increase in fuel prices."