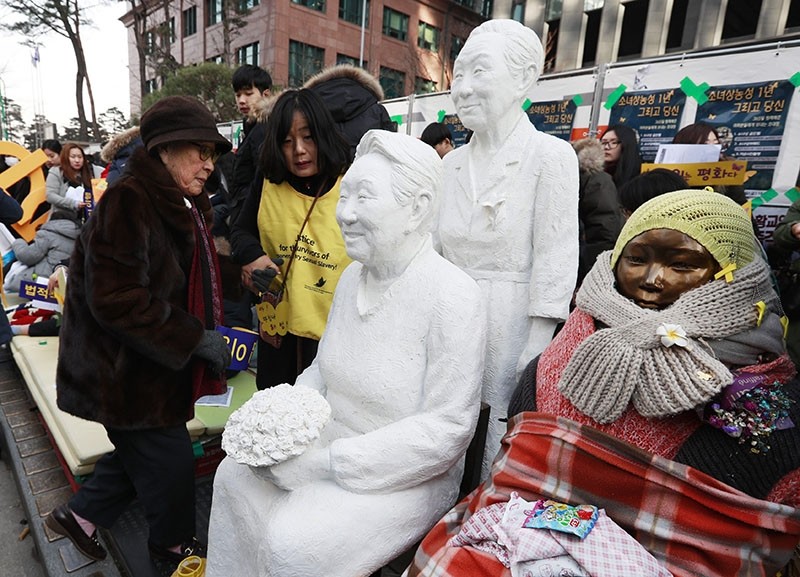 A file photo dated 04 January 2017 shows Kim Bok-dong (L), former 'comfort woman', approaching a statue of her during the weekly rally in front of the Japanese Embassy in Seoul, South Korea. (EPA Photo)
by Compiled from Wire Services Jan 06, 2017 12:00 am

Japan announced Friday that it would recall its ambassador to South Korea and suspend economic talks in response to the placing of a "comfort-woman" statue representing wartime sex slaves in front of its consulate in the Korean port city of Busan.

Both Ambassador Yasumasa Nagamine in Seoul and the consul-general in Busan will be temporarily recalled, Japanese Chief Cabinet Secretary Yoshihide Suga told reporters after a Cabinet meeting.

Suga called the placing of the statue "extremely regrettable," since Japan and South Korea had reached what was supposed to be a final agreement to resolve long-standing differences over the issue in late 2015.

He said that Japan would suspend some ongoing negotiations with South Korea, including a proposed currency swap arrangement for times of financial crisis

The South Korean Foreign Ministry called Japan's decision to recall its ambassador "very regrettable," adding that both countries should work toward advancing bilateral relations based on trust "even when there are difficult problems."

Mainstream historians say up to 200,000 women, mostly from Korea but also other parts of Asia including China, were forced to work in Japanese military brothels during World War II.

The plight of the women is a hugely emotional issue that has marred relations between the two Asian neighbours for decades and which, for many South Koreans, symbolises the abuses of Japan's 1910-45 colonial rule over the Korean peninsula.

The statue is a copy of one that sits across the road from the Japanese embassy in Seoul and that for more than five years has been a rallying point for supporters of the few surviving South Korean former sex slaves.

The statue in Busan was initially removed by local authorities after South Korean activists placed it in front of the Japanese consulate in the southern port city last week.

But they did not stop it being put back after Japan's hawkish defence minister Tomomi Inada offered prayers at a controversial war shrine in Tokyo the next day.