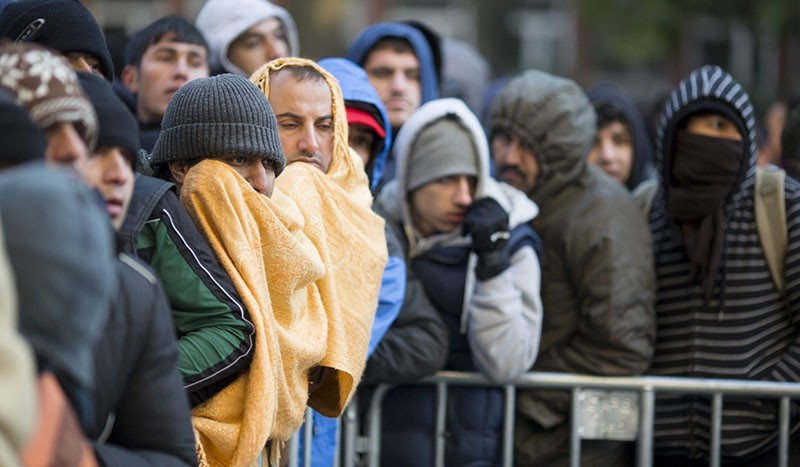 Refugees, migrants try to keep warm as they wait for registration and allocation of a sleeping place on the premises of the State Office of Health and Welfare in Berlin, Germany, 12 October 2015. (EPA Photo)
by Compiled from Wire Services Jan 12, 2017 12:00 am

Germany will begin returning asylum seekers to Greece from mid-March, an interior ministry spokesman told the AFP on Thursday, essentially lifting a five-year suspension on such transfers because of the poor conditions there.

Under the EU's so-called Dublin rules, would-be refugees must file for asylum in the first member-state of the bloc they enter, often the Mediterranean nations of Greece and Italy. If asylum seekers have traveled on to other EU nations, they are to be returned to their first port of call. But that requirement had been halted for Greece, which together with Italy has been the main point of entry for the more than one million migrants who have entered the bloc since 2015, fleeing war and poverty in the Middle East and Africa.

A German interior ministry spokesman told the AFP that Germany would reinstate the Dublin rules in two months' time and return newly arrived asylum seekers to their first EU port of call. "In line with the recommendation from the European Commission, Germany believes that such transfers will be possible from March 15," said the spokesman, Tobias Plate.

The EU recommended on Dec. 8 that member states resume sending asylum seekers back to Greece from March next year, after such transfers were halted in 2011.

Athens has criticized the EU's assessment, with Migration Minister Yannis Mouzalas saying that the current legal framework was "unable to respond to the historic migration flows and leaves the burden to the member states that migrants first arrive in".

German refugee relief group Pro Asyl has also raised concerns, warning that the measure would put the asylum system in Greece, a country still recovering from a deep debt and economic crisis, under further pressure.

Germany's 2015 decision to open its doors to Syrian refugees, and to effectively suspend the Dublin rules for them, brought 890,000 asylum seekers in that year alone. But the move by Chancellor Angela Merkel has proved controversial, and the government has since sought to bring numbers down.

Meanwhile, Europe's recent cold spell left refugees and migrants in dire conditions and governments must do more to help them rather than push them back from their borders and subject them to violence, the U.N. refugee agency UNHCR said on Friday.

"Children are particularly prone to respiratory illnesses at a time like this. It's about saving lives, not about red tape and keeping to bureaucratic arrangements," Sarah Crowe, a spokeswoman for the U.N. children's agency UNICEF said at a briefing in Geneva. "The dire situation right now is Greece."

UNHCR spokeswoman Cecile Pouilly cited five deaths so far from cold weather and said that about 1,000 people, including children, were in unheated tents and dormitories on the Greek island of Samos, calling for them to be transferred to shelter on the mainland.

Hundreds of others had been moved to better accommodation on the islands of Lesbos and Chios in the past few days.

In Serbia, about 80 percent of the 7,300 refugees, asylum seekers and migrants are staying in heated government shelters, but 1,200 men are sleeping rough in informal sites in Belgrade.

"Given the harsh winter conditions, we are particularly concerned by reports that authorities in all countries along the Western Balkan's route continue to push back refugees and migrants from inside their territory to neighboring countries," Pouilly said.

Some refugees and migrants said police subjected them to violence and many said their phones were confiscated or destroyed, preventing them from calling for help, she said. "Some even reported items of clothing being confiscated, thus further exposing them to the harsh winter conditions," she said. "These practices are simply unacceptable and must be stopped."

Joel Millman, spokesman for the International Organization for Migration (IOM), said migrant movements across the Mediterranean had "started out in a big way" in 2017, and that the death toll for the year was already 27. The World Meteorological Organization said a movement of cold Siberian air into southeastern Europe had driven temperatures in Greece, Italy, Turkey and Romania to 5-10 degrees Celsius lower than normal. Such cold outbreaks happen about once in 35 years on average, the WMO said.