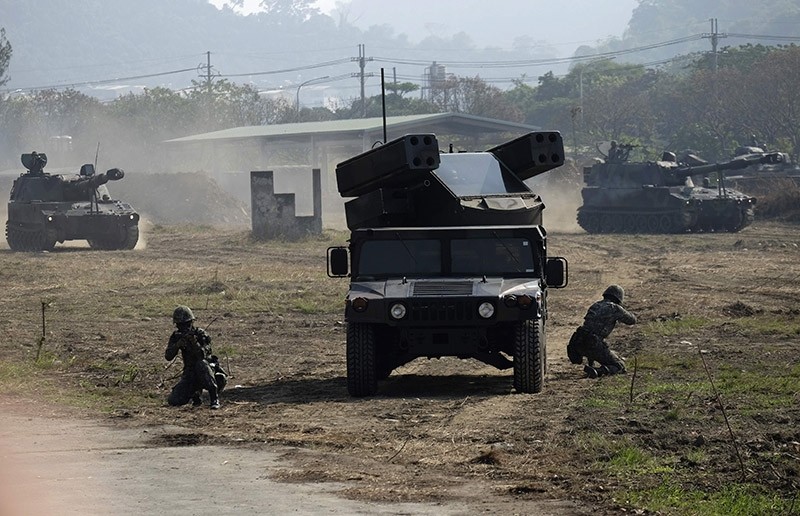 Soldiers hold positions next to a US-made Avenger air defence missile system launcher during an annual military drill in Taichung, central Taiwan on Jan. 17, 2017. (AFP Photo)
by Jan 18, 2017 12:00 am

Taiwan began two days of military drills Tuesday simulating an attack by China as the government sought to reassure the public in the face of deteriorating relations with Beijing.

"The military has active measures to deal with the situation in the Taiwan Strait and the South China Sea so the public can rest assured. We will enhance training 365 days a year," defence spokesman Chen Chung-chi said.

Beijing considers Taiwan to be a breakaway province and part of "one China" to be brought back within its fold, by force if necessary.

China has stepped up drills in recent weeks after being angered by an unprecedented call between Taiwan's Beijing-sceptic President Tsai Ing-wen and United States president-elect Donald Trump.

The US switched its diplomatic recognition of China from Taipei to Beijing in 1979.

Trump has also riled Beijing by suggesting the "one China" policy could become a bargaining chip in negotiations over trade practises.

The US is Taiwan's most powerful ally and arms supplier.

Tuesday's drill mimicked an attack by China in a scenario where its war vessels have crossed over the middle line of the Taiwan Strait.

Soldiers held positions next to a US-made Avenger air defence missile system during the drill in central Taichung city as special forces moved in formation through woods and a tank set off smoke bombs and crushed a car.

It comes after Beijing's only aircraft carrier sailed through the strait last week in what was seen as a show of strength.

The Liaoning did not enter Taiwanese waters but went into an area covered by its air defence zone.

Chinese military aircraft also passed near Taiwan on December 10 for the second time in less than a month.

In addition to the drills, the air force confirmed Tuesday an upgrade of Taiwan's 143 F-16s was under way, with materials supplied by US aerospace company Lockheed Martin which manufactured the jets.

"Taiwan is the first country in the world to upgrade the F-16 A/B fighters to F-16 V. We are enhancing our aerial capabilities to ensure national security," an air force official told AFP.

The government-funded project, codenamed "Phoenix Rising" has a budget of Tw$110 billion ($3.47 billion) and aims to be complete within the next six years.

Defence minister Feng Shih-kuan has said the F-16 V could match China's Chengdu J-20 stealth fighter, although Chinese media have dismissed this as an "illusion."

The jets will be equipped with radar to detect stealth aircraft, as well as more advanced avionics and missiles, according to local media.

Minister Feng recently warned of growing threats from China and called for increased vigilance, urging the island's youth to join the military.