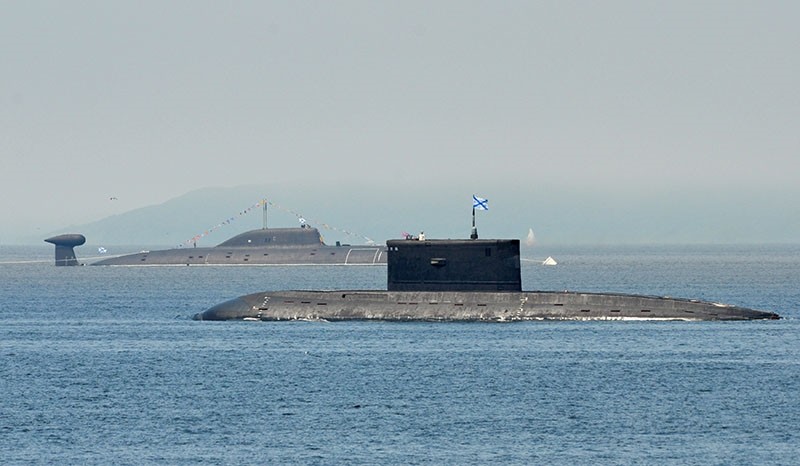 Russian submarines sail during a rehearsal for the Navy Day parade in the far eastern port of Vladivostok, Russia, July 30, 2016. (Reuters Photo)
by Jan 20, 2017 12:00 am
Vietnam has received its sixth attack submarine from Russia amid rising Chinese assertiveness in the South China Sea, state-controlled media reported Friday.

It will join the navy's five other Kilo class submarines, which are newly manufactured models nicknamed the "black hole" by the US Navy due to their advanced stealth capabilities.

With a maximum depth of 300 meters, the HQ-187 can stay at sea for 45 days without refueling and can sink or cripple larger vessels with its anti-ship weaponry.

The submarine, which was initially ordered along with the five others in 2009 at a cost of 2.1 billion dollars, arrives as tensions simmer in the South China Sea.

China, which claims almost all the sea including areas claimed by Vietnam, has reportedly sent advanced weapons to islands under its control while the US Navy regularly sends patrols to the region.

With the order from Russia fulfilled, Vietnam's military has completed one of its most ambitious modernization efforts as it gains firepower for a potential future war against China.
Last Update: Jan 20, 2017 6:26 pm
RELATED TOPICS