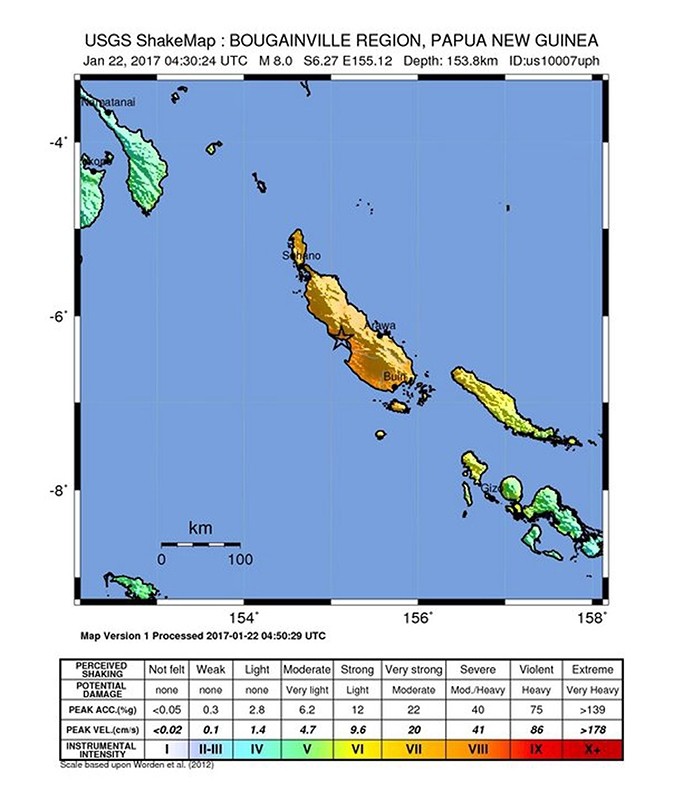 A handout photo made available by the United States Geological Survey shows the location of a 8.0 magnitude earthquake (EPA Photo)
by Compiled from Wire Services Jan 22, 2017 12:00 am

A powerful magnitude 8 earthquake hit the Papua New Guinea and Solomon Islands on Sunday and the Pacific Tsunami Warning Center said it could generate tsunami waves on nearby islands.

The Pacific Tsunami Warning Centre warned hazardous waves could hit coastal areas of Papua New Guinea, Indonesia, Nauru, Vanuatu, the Solomon Islands and others within the next three hours.

No casualties were reported. But there was damage in parts of central Bougainville and the major town of Arawa, Aloysius Laukai, manager of New Dawn FM Bougainville radio station, said in an email.

The provincial capital of Buka was blacked out and residents of the southern town of Buin were moved to higher ground as a precaution against a potential tsunami, Laukai said. All tsunami warnings were later lifted.

The greatest tsunami threat had been to Bougainville and that threat had passed without any report of a tsunami, McKee said.

"I suspect that because of the great depth of the earthquake, there was probably no significant tsunami," McKee said.

Solomons government official George Herming said he was not aware of any major tremors being felt in his country or any tsunami.

Jennifer El-Sibai, Save the Children's Country director in Papua New Guinea, said that national and provincial disaster authorities were monitoring the tsunami situation and Save the Children staff were ready to respond if required.

The countries are located in the Pacific's geologically active "Ring of Fire."