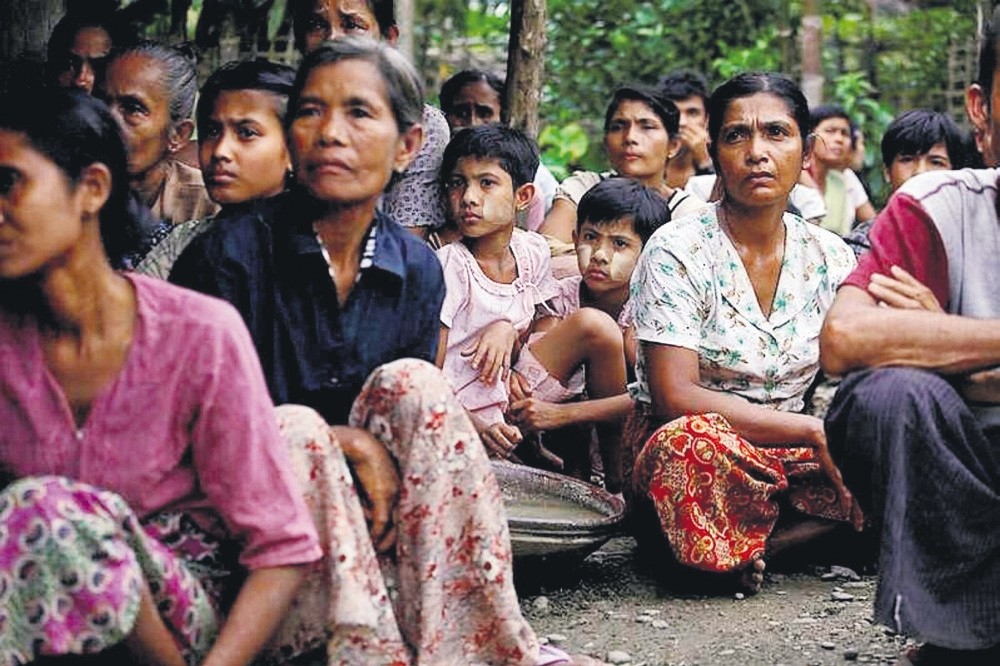 Rohingya Muslims sit in a temporary refugee camp after losing their homes during the violence in Thapyuchai village in the Rakhine state.
by Daily Sabah with Wires Jan 24, 2017 12:00 am

Violence and fundamental rights abuses continue against Muslim Rohingyas, one of the most persecuted minorities in the world according to the United Nations, continues as more than 87,000 have reportedly been displaced in Myanmar

At least 87,000 people have been displaced since the military launched a crackdown in Myanmar's western Rakhine state early October, United Nations said yesterday. The United Nations Office for the Coordination of Humanitarian Affairs (UNOCHA) said in a weekly report that at least 21,000 people are estimated to be internally displaced in the northern part of Rakhine State as a result of the October 9 attacks and security operations.

"This is in addition to the 66,000 people estimated to have crossed into Bangladesh," said the UN relief agency. "Although humanitarian activities have been able to resume in many areas of northern Rakhine, the Government is still not permitting international staff to travel outside the main centers," it added.

Since Oct. 9, aid agencies and independent journalists have been denied access to the majority of Rohingya areas. At least 104 people — 17 police and soldiers, 11 Muslim men working closely with the local authorities and 76 alleged "attackers," including six who reportedly died during interrogation — have been killed, and more than 600 people have been arrested.

However, Rohingya advocacy groups claim around 400 Rohingyas — described by the U.N. as one of the world's most persecuted groups — were killed in military operations, women were raped and more than 1,000 Rohingya villages torched.

The U.N. special rapporteur on human rights in Myanmar, Yanghee Lee, said the armed insurgency in the Rakhine state was due to the decades of institutionalized discrimination against Rohingyas.

Myanmar's army began the latest crackdown in the Rakhine state in October after nine policemen were killed along the border with Bangladesh. The government and the army have rejected accusations of abuse, saying they have been conducting operations to clear the area of armed elements.

According to a report by the International Crisis Group last month, the October attacks were masterminded by a Saudi-backed group called Harakah al-Yaqin, which has spent years recruiting and training fighters in Bangladesh and northern Rakhine, following the sectarian violence in 2012 between Rohingyas and Buddhists.

Myanmar's nationality law, approved in 1982, denies Rohingyas citizenship. According to the law, foreigners cannot become naturalized citizens of Myanmar unless they can prove a close familial connection to the country. In addition to denying them citizenship, Myanmar also denies freedom of travel and access to education, along with systematic persecution by the Buddhist majority.Rohingyas are not recognized among the 134 official ethnicities in Myanmar because authorities see them as illegal immigrants from neighboring Bangladesh. They are subjected to forced labor, have no land rights and are heavily restricted by the government. They have no permission to leave the camps built for them, no source of income and rely on the World Food Program to survive. The U.N. considers Rohingyas to be one of the most persecuted minorities in the world.

The unrest in Myanmar, which began in 2012, has cost many Rohingyas their lives, and about 140,000 stateless Rohingyas have been placed in internal displaced people camps due to increasingly violent attacks on them, the U.N. High Commissioner for Refugees (UNHCR) said.

The Rohingyas are a Muslim ethnic group living mainly in Myanmar. Rohingyas are thought to be descendants of Muslim traders who settled there more than 1,000 years ago. As of the end of 2016, approximately 1.3 million Rohingyas live in Myanmar and about 300,000 to 500,000 live in Bangladesh.
RELATED TOPICS